Pictures of Fall or The Fall of Pictures

I've taken a few pictures of things here and there.  Let's take a look at them together.

First, a very scary Halloween to you and yours.  I think I'm going to start sending out Halloween cards as opposed to Christmas.  That way you automatically have a new theme every year instead of racking the far reaches of your brain to come up with something new and equally ingenious as the last.  Plus you KNOW you'll be the first to get it out which = WINNER OF CHRISTMAS.   Just like the stores that decorate for the holidays before Halloween! which everyone LOVES.  I really think I'm onto something here.

Speaking of creative genius, this year, as often happens, while shopping for vegetables, I was struck with a vision.  As I held the multi-color trio of peppers before me I declared to all who would hear--My friends!  This year, instead of the pumpkin, I will be carving an ORANGE BELL PEPPER WHICH LOOKS JUST LIKE A PUMPKIN AAAH I CAN'T STOP THE ALL CAPS!!!

Why had i not thought of it before?

a) tiny, which, as everyone knows, is always more fun
b) the best part-- hardly any mess at all! No one wants to dig into that pumpkin glop. It's the worst. If i could I'd buy pumpkins pre-scooped for my jack-o-lantern.
c) it's so eeeeasy.  And the soft smooth flesh gives it such a nice ethereal halloweeny glow. 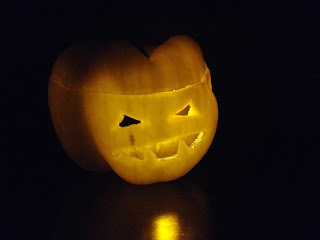 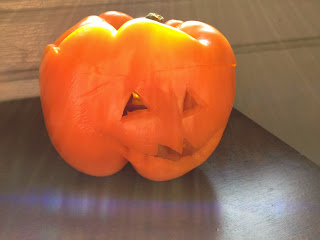 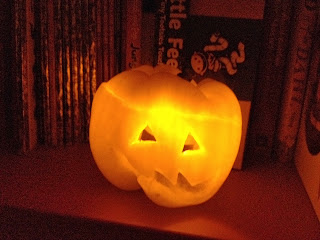 Yes, that one may or may not be on Julian's shelf, used as a nightlight.  My friend came up with the name .2 seconds before I could--DANG her.  But I must credit her genius and quick, clever mind.  Also, she told me that the candle in her Pepperjack burnt her pepper and voila! roasted peppers!  So really it's a win-win-win.    Try it today and thank me tomorrow. 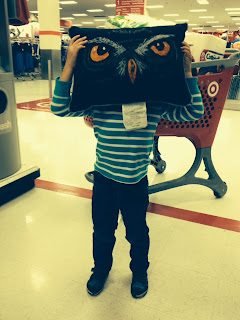 Lots of Halloween decorations up around here.  I've only taken one picture though and it is this: 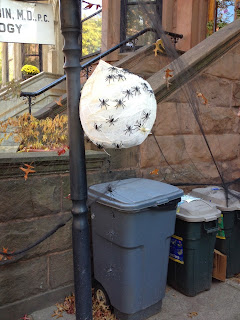 
Julian is, of course, very much into the halloween spirit.  Last night ee asked if it would be bright today, thinking it would be dark all day because it's Halloween.  What? Why would he even think that? I think he must be more into it than I am.  Like, I'm a little worried. Like, i think i'll check under his bed for candles and eyes of newts for rituals he may be planning.


This next picture is me trying to be crafty with food.  Julian made me buy marshmallow ghosts and we tried to dip them into chocolate which worked except the chocolate was too thick and they didn't quite keep their ghostly shape.  Some of them looked like ghosts, some looked like snowmen. Which is weird because i called this file "marshmallowclouds."  ???  Never did that occur to me at the time. 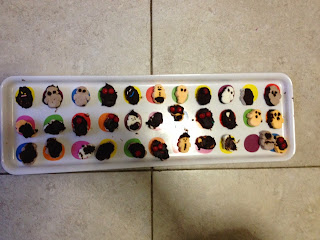 But anyway, what started out as a nice, innocent and festive Halloween activity quickly took a terrifying and sinister turn when Julian, who was painting his marshmallows completely in chocolate, announced that he was making a bunch of taking boys: 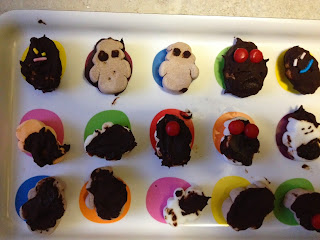 Arrggh.  Kind of lost its magic for me after that. :/

Julian and I also made some Apple Uglies.  Apple Uglies are an age-old tradition in my family of decorating caramel apples with candy.  The best part of it this year was going to Dylan's Candy Bar and letting Julian choose ALL the candy. We went around the enormous center bulk section  that spans as far and wide as the eyes can see if you have bad vision and i held the bag while he scooped.  We had everything. Everything.  And then we started dancing to the music and BLAM-- the bag with the most candies in it burst and candy exploded everywhere.  Ha ha! So we had to retrace our steps and do it all again which was a delightful challenge.

Here is mine.  Kind of a retro, happy, work-out nerd? 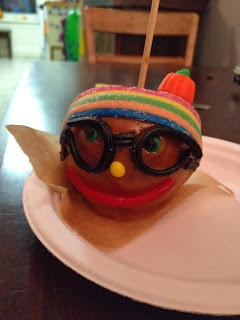 Then I amped it up by putting in giant bug eyes on it. 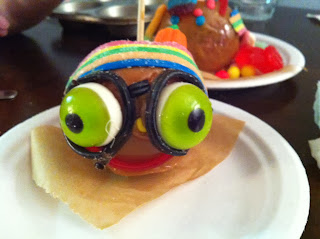 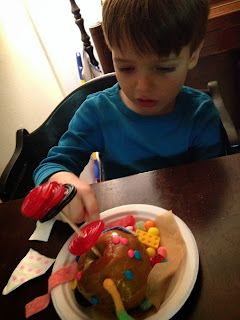 Kids' apples are always the scariest. One row of upside down teeth?? Arrgh!  And the speckled head on the side?  The candy vomit spilled all around? The eerily cheery rainbow blindfold? What's UNDER that thing?  Well done, Julian. 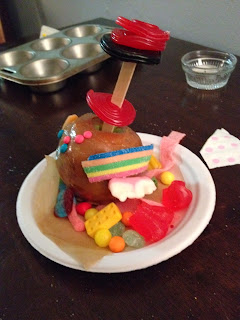 Speaking of candy, we couldn't pass up the suuuuper long gummy snake: 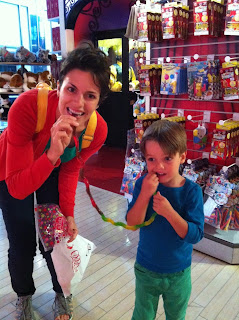 This year we visited our old favorite haunt (-- ohhh!), the glorious wondrous trail around Teatown Lake Reserve. We walked with some pals, Paul and Suvi. 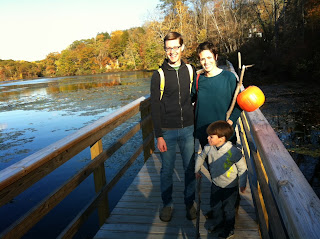 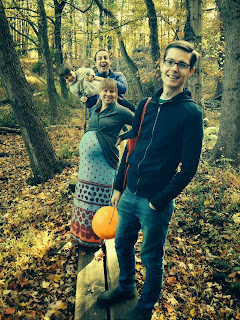 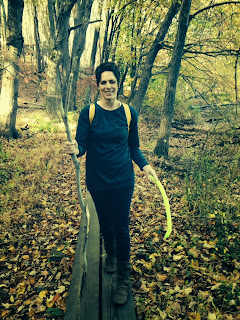 That's an accordion hose toy i'm holding.  I brought it for Julian but played with it myself the whole time. I don't know why i'm explaining this except that it looks so weird in the pic.


This next one isn't necessarily fall-y, but it depicts one small brooklyn moment.  After preschool one day some friends and I decided to go get some lunch somewhere.  One friend parked her car and had her new baby in the carseat but we had to walk a while so we put the carseat on a scooter because that's how we do in BKLYN!  So funny. That scooter is one my friend rides on to go pick up her son from school.  Love it. 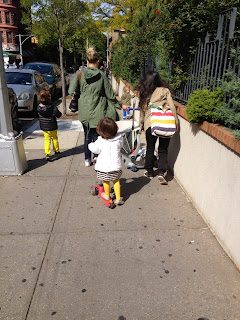 Julian and I were wandering outside after church one sunny afternoon a couple of weeks ago--at a building in Staten Island that actually has grounds and a parking lot--whaa?  Anyway, so we played on these stumps and i had him take my picture.  It's so weird.  I look like some weird, dressy scarecrow or something. 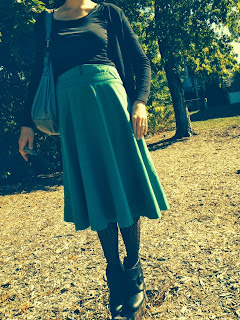 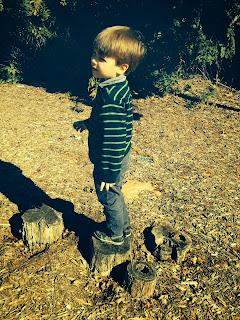 THE COSTUME.  We focused more on Julian this year.  For me, dressing up is so fun but I only do it when i have a plan.  I won't dress up if i can't think of anything. It's all or nothing, i guess.  Or something or nothing.  Anyway, but Julian's-- OH, Julian's!

First, a bit of the process.  As mentioned, it's been nonstop Titanic-talk for months and months around here.  I'm pretty sure it's here to stay.  It really feels like a member of the family.  In fact, this morning when Julian woke up he was concerned because our house (the Titanic) was going to hit an iceberg. He wasn't dreaming, he was just pretending. Pretty sure. We now live ON the Titanic.

So, one day I asked Sean, do you think? Could you? Would you?

He said he would. I knew he could.

I tried to get pics of the process but only snapped just a couple, he whipped it up so fast.  But I did manage to record some dialogue that went with it which entertained me quite a bit.  So here it is: 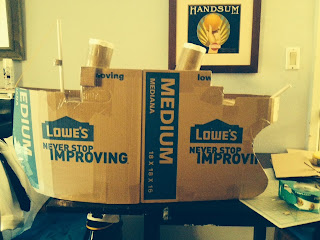 SEAN:  I think I'm catching the Titanic Dream.  It just... the design of it inspires confidence! I mean, look at it! It's a strong shape.

SEAN [continuing to admire]: It's so sturdy... it doesn't flex the way you'd expect.

JEN [and this is where the nerdy Titanic jokes come in because we all know too much]:  You know, you should give it a double hull...

JEN: Uh huh, yeah. And you should make some water tight compartments. Just to be sure...

SEAN: Well it IS airtight over here! I could probably get like 4 compartments...

JEN: Could you make more than that? But you probably wouldn't need them...

SO nerdy. Here's the titanic back story, in case you haven't seen 7 documentaries, two mini-series, visited a museum and read 5 books on the subject.   The hull was double sided (on the bottom, unfortunately), they DID build watertight compartments but they were inefficient and 6 flooded. The Titanic could have stayed afloat with 4 flooded, but not more than that.

Sean really was so into it though and feeling super confident and proud.  I was dying.

And one more commentary, on another day...


SEAN [making tiny lifeboats out of cardboard]:  Now... i hear myself thinking, we don't need that many lifeboats. Why am I putting so much work into them? We're not going to need the lifeboats.

A minute later, to himself

Why should I make so many? They're only decorative...

Oh I was just tickled. 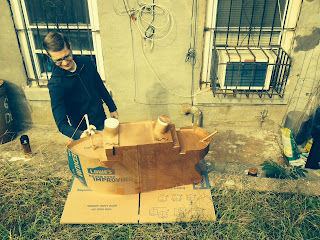 He spray-painted it gold and then painted over it.

Painted, attached straps, made the flag, a crow's nest WITH bell (out of clay you can bake), with teeny tiny lifeboats, and not nearly enough.

Finally it was done and we had Julian try it on: 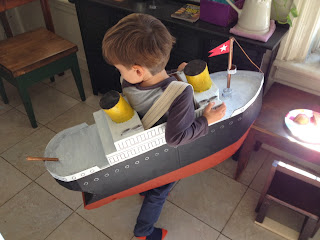 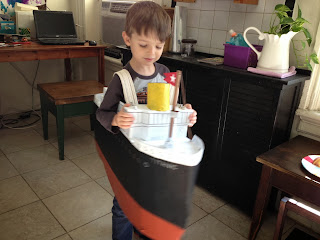 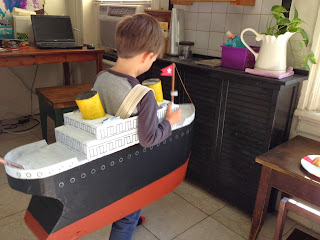 Amazing! Amazing! I die every day just looking at it.  And here we are in our costumes, two foes  doomed to meet one chilly ill-fated April night: 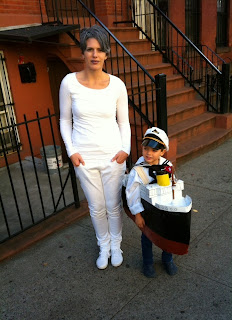 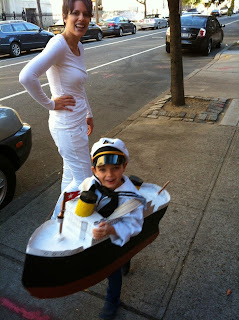 It's just too good. TOO GOOD.  I will pass along your praises to Sean.

Speaking of Sean creations, i walked in the living room and found this one out of legos.  What the what?? 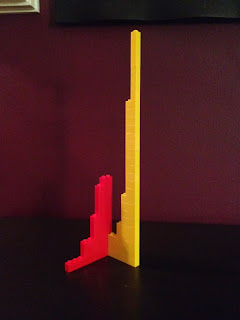 Suvi is one of my favorite people, even though I haven't seen her in years and since she stopped posting on her blog after she got engaged I have known absolutely NOTHING about what's going on in her life. But I still adore her, and seeing her pregnant was awesome. Please tell her Hi from me?

Oh my. Jen and Sean and Julian. This is truly a Halloween masterpiece year. My sincere congrats to Sean on an amazing Titanic. And you, Jen, look so frosty cold and imposing (well, not really imposing, 'cause you're gorgeous, but still)...

Woah. Sean's making me look bad both creatively and as a father. "You want to be Titanic for Halloween? lets see...nope, they don't sell those on Amazon."

I just stared at my computer, dumbstruck, when I got to the pictures of the Titanic. It is . . . ineffable. There are never going to be any words to describe that. Bravo, Sean. Bravo.

And you were born to be an iceberg. You look great.

Bravo to all of this.

Wowie, Zowie, you three! LOVE this, every single part of it!

Srop the press! You're friends with Jen Rose Potter??!! Us too!!

But really, that costume... None of us can get enough of it. And you know that's not false flattery--you've seen the fits. Suzie and I just contain ours a little better than the Magoo...

With the exception of the first upswing of Kate Winslet's hat in the ACTUAL titanic movie - I have never been more impressed. ever.

How are you friends with Alanna?!? How do we make us connect outside of comments on Jen's blog???

Also I am proud to have made it onto the blog. Thank you. Thank you. But even more, I can't stop thinking about the Titanic costume, it was the best costume I have ever seen.

Hey I know and love Suvi too!!!! She was my roommate for a little while! Please tell her hi for me too and congrats on the upcoming baby!!!
Also I think that is the coolest costume I've EVER seen! Do you have instagram? please I want you to so I can follow you!!!

Words are inadequate to describe the awesomeness of the costume. It belongs in the Louvre.

Wow, crazy connections! I am glad I could reconnect you. It's just one of the many things i and my blog do-- bring people together.

Rene, I don't have instagram. I'm afraid. Maybe one day.

Aaah--Amber, the one thing missing: Kate's hat. Dang. Should have swapped the sailor hat out for that.

p.s. I'd be happy to offer up Sean's services for a fee. Why make stuff when you can get someone else to do it? as i always say.

Also, may I introduce you to a little thing called Facebook...

I'm laughing out loud. (I guess I could say lol-ing, but then I'd have to shoot myself.)

Guess it's time to update my list o' friends!

Oh man, you should get instagram, and get it now!!!!