It's a law of science that miniature things always = cute and in the case of food, always = better.  We recently attended a food gathering where the theme was "miniatures" and Sean and i finally were able to bust out our mini donut pan.  That's right.  Behold! 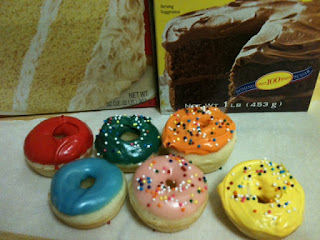 Here's a close-up of the most perfect doughnut in the bunch: 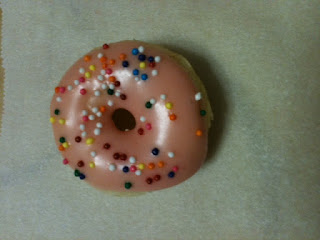 So, the garish colors were my idea. Way to take it ugly, jen. Sean made this nice pink and then i was like, "how about--how about-- bright.. TURQUOISE??"  and then i made that scary green up there. I feel like that's the one Voldemort would choose if presented with a tray of these doughnuts.   But MAN they are cute.

Here's a picture for scale: 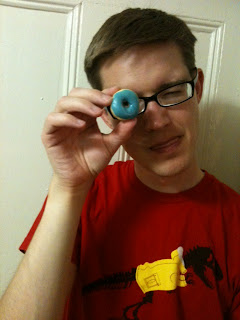 Our recipe made regular doughnuts but we decided to make some chocolate ones as well. 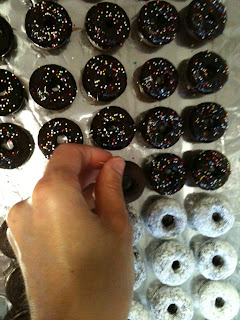 With a bit o' ganache topping on some and powdered sugar for others. Head dangerously close to exploding at this point.  And then Sean decided to whip up a mint glaze: 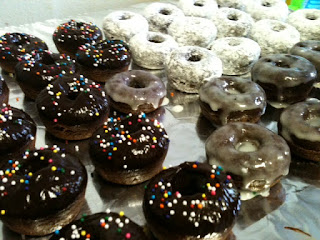 
p.s. extra bonus points if you can guess what that neon green thing is in the corner. 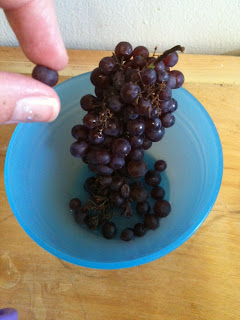 WHAT?!? They're so small!!!  They're called "bunchkins" and I die each time i look at them. We get them from the green cart guy down the street. He has a fruit cart/stand set up and we'll sometimes pick up some fruits on a walk.  They're so deliciously small.

And here's a picture of Julian, who's pretty miniature. Splashing around at the playground around the corner. 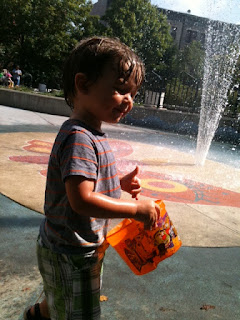 I wish i had a waffle with MY name on it... jealous. I love that we forced him to eat this just because it has his name. "Eat this--EAT IT."    j/k it was delicious. 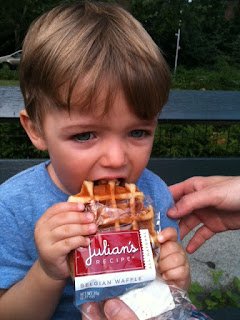 and at the library. I'm beginning to think that all businesses should come with fountains.   Love these cute little ones. 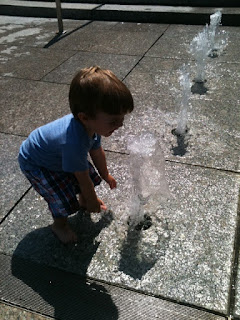 I love small things.
To see other small foods at the miniatures party, go see Amberbop.
Posted by )en at 6:24 AM

"Jurassic Parka?" It looks like a dinosaur skeleton wearing a coat.

Lovely. Was the recipe as tasty as it looks? If so share... maybe a tutorial. The only bad thing about the mini donuts would be my justifying eating more of them than I should because of their tiny size. How long did they last? Did your family enjoy them all? Or did they make it to a party or perhaps a gift? Just curious.

I require one of those mini chocolate donuts. I was thisclose to buying a bag of Entenmann's at Target on Wednesday, but James dissuaded me by pointing out that they looked like they were pulled out of a storage box dated pre-internet. I still wish I had them.

Valerie, NO. Just say no to Entenmann's. Tell James I'd be happy to co-stage an intervention.

(These, for people who want to be in the know.)

Could not figure out the shirt at all. I'm glad your other readers are smarter than I am! And I love the picture of Julian eating the waffle, partly because you can see his name so well, but mostly because he totally has a look on his face that says, "Mom is forcing me to do this."