As mentioned some time ago, we've been reading quite a bit of Calvin and Hobbes lately. This is a wonderful example of having a love for something and then finally being able to share it with the small version of yourself. It's THUH best. I have a fond and kind of desperate love for Bill Waterson, author, creator. His elusiveness (I prefer elusivity but dictionary.com says no) and mystery make him all the more appealing, on top of his clear genius, i mean. I love this strip, and I know you do too.

As a kid, my favorite thing was to take a comic book and read it in some corner somewhere. And then as I got older, some of the jokes would make more sense and it got even better. The illustrations are a thing of magic-- the expressions, the details, the humor and heart and emotion. Aaah! Oh Bill. *silently crushing*  I haven't read them a whole lot since having a squirt and have begun to really dive back in only lately.  Julian is now in the first grade and we share the comic books. He will read them, then practice using phrases with us. He'll take lines, word for word, and say them to me:

And I'll reply, "Learning a new word, are we?"  9 times out of 10, his weird thing that might pop out belongs to Calvin.

So, I don't know if it's because of his immersion or if it's happened naturally, but I've realized that Julian IS Calvin. We ARE this family, and I'm blogging today to break down all the many reasons why, with many pictures included.

1. He's the same age as Calvin and is precocious. Obviously Calvin is a little man child and uses words and identifies concepts no normal 6 or 7-year-old would, but still, Julian does the same in his way, and the semblance is real.

2. Julian has a feline friend that is his best friend. He has a relationship with him that no one else has. Our cat runs to the door when Julian comes home. He often pounces on an unsuspecting Julian who mightily swears vengeance and retaliation amongst tears and a shaking fist.  Kitty (Hobbes) finds every opportunity to dive into Julian's room and hide under his bed. And, whatever Julian's doing, Kat is there. Julian keeps getting new face scratches because Julian insists on nuzzling the furry soft kitty tummy. He pays the price but I guess it's worth it to him. It is very soft.

3. Julian has a bike but he really hates it. He fears it. Declares he never EVER wants to learn how to ride it but will give it a try every now and then, only to have all of his fears confirmed, and then swears vengeance and retribution mightily. 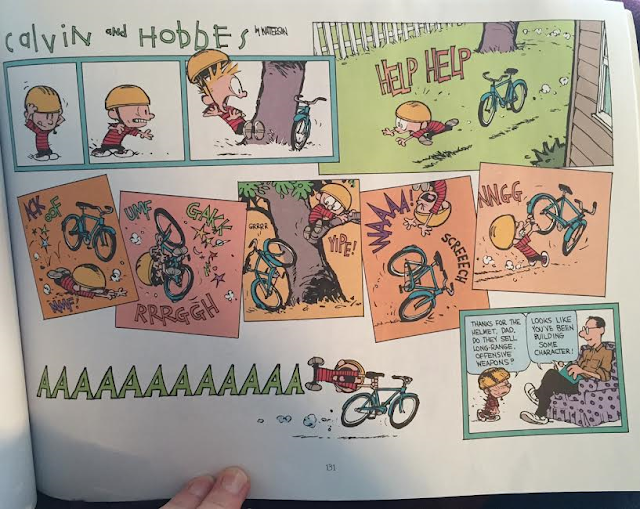 4. Julian lives in a universe separate from everything else.  I may have shared this already, but one time we were in an airport between flights and in search of some food. We found some and Julian was doing his usual pacing. Have i mentioned this pacing?  He has this physical and mental need to pace, every day, multiple times. I don't know if it's his way of expelling excess energy or a way for him to deal with his creativity but he must do it. And he's intense about it. Back and forth, living in a story, creating things in his mind, adding sound effects.  He must be alone and not interrupted.

Except in the airport he needed to be interrupted when I asked him what he wanted to eat.  He got upset at me, as he does whenever he's interrupted, and snarled exclaimed he needed to get back to his pacing. I said, "you can. But sometimes we need to be in the real world! So tell me what you want to eat and then you can go back!"   And he cried and asked, desperate, "but will I have to stay in the real world forever??"  And I laughed and told him no, child. But he still had to check in from time to time. Also, he likes people, and likes friends. But he struggles with how exactly to be with them. Whereas he often feels quite comfortable in front of them, like as a teacher or storyteller.

Side note: Every once in a while Julian will tell me what's going on in his pacing.  Just this morning he said to me, "So in my pacing, Santa's sleigh is broken and I've taken over and am fixing a new, better one. I attach things to it, better engines and rockets and things that are cool and make it stronger and more powerful."   So that's fun.

5. Like Calvin, he feels the strong emotions. ANGRY!* ECSTATIC! JOYFUL! SAD.  Sad looks weird in all caps but still, it's true. He demands justice, he laments the injustice of the world as directly related to himself (as all injustices are), has good in him but chooses not to show it at times, preferring the role of the villain. I've had to banish "bad guy" talk, for example.  He's a pusher of buttons, not afraid to doesn't even consider that maybe he shouldn't speak his mind, ever (to whomever, it doesn't matter) and frankly, every single strip I read I'm thinking, Julian. Julian. Julian, Julian, Julian. It's nutty. 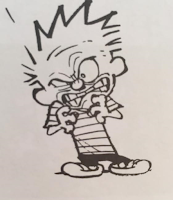 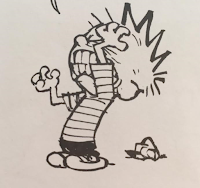 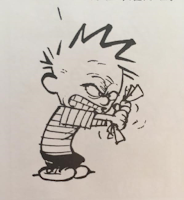 * emphasis on the angry. The other day I explained to him what having a short fuse meant. I used my own arm as an example: "let's say the string, the thing you light to, say, some dynamite or a bomb, is this long." *indicating length of arm*  "...with my shoulder being the bomb."   I then illustrated how long it might take for that burning fuse to reach my shoulder-bomb.  "Now, some people have a shorter fuse, like the bomb is at their elbow. YOUR fuse is about the length of my fingernail and my KNUCKLE is the bomb."  And then acted out the whole thing. "tss--BOOM!!!"  He enjoyed this, probably because I was talking about bombs, but hopefully he understood the parallel there.

I have another strip to illustrate this point:


In terms of shouting out any and every thought:


6. He's clever and witty and calls me out on all sorts of things. He's also getting a bit of a mouth.  I half want to give him a smack, half want to high five him for a solid joke or burn. Maybe I'll just high five his face in a proud way. Ha ha. I guess it's not funny talking about slapping kids but it kind of is, and high fiving faces still makes me laugh.
But he has sass coming out of his ears and the sarcasm grows increasingly rampant. Responses like this are constant:


7. He is the pickiest eater alive. But mostly when it comes to dinner. Fortunately he doesn't merely prefer just garbage food. For instance, he'll eat a plate of raw veggies, no problemo. But basically every single dinner we attempt goes like this:

9. The way his brain works is just to amusing to me. And mystical. Remember his Christmas tree a couple of years ago?  Though he can now construct something identifiable, many of the original elements and ideas are the same.  For instance, I snapped a pic of a page from his thankfulness journal (which is super adorable).  Check out the hair though: 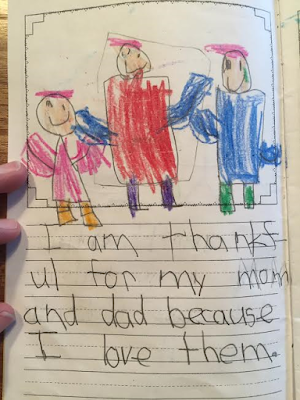 And the extremely cubist nature of the bodies and body parts. Rectangle here, triangle here. It's like that's how he sees the world, which sounds freakishly mathematical and Einsteinian to me. But the hair just makes me laugh. "And now the hair. Pink scribble here, here, and here. Hair done."

This strip is so accurate. Why do it the way it was intended?? So boring.


9. And at the end of the day, Julian is just so very boy. This fact is good for me to remember. I think it's because I like to explain away all of the weird by just saying "he's a boy and boys are weird."   When he was about 2, I took two big lovely gingerbread houses we had decorated, put them on cookie sheets on the floor, gave him a hammer, and told him to go at it.  The demolition was definitely the best part of any decorating. He often helps Sean in his shop (garage), with various projects here and there, and it's pretty cute. But still, weird, like Calvin:

Julian loves bashing old toys. Some people donate them to make other children happy. We
destroy them into bits and pieces so no one can ever again.   Just the other day on our walk home he picked up a gross soda can, and after I made him wash it out, took it to his room and hammered the life out of it. He then asked if I had anything else that needed to be crushed. Trying to be more fun than Calvin's mom, I tried to think of things. Here's the sign that currently hangs on Julian's door:


Working on this series has made me wonder if Sean and I were like Calvin's parents as well. We actually sort of look like them. I definitely feel like I'm more fun than Calvin's mom but I bet to Calvin, his parents aren't any fun at all even though they probably try. Sean and Calvin's dad are both nerds, rational, smart. I'd say they're pretty similar, actually.  Guess I'll be doing that one next.

To the boy and his tiger!

This melts my heart. Samuel loves Calvin and Hobbes too, and he frequently says things that click in my mind as quotes from the comic strip, and it gives me a warm feeling to know he's learning from the right places.

Holy cow I just re-read this post and it is a hot mess. No proofreading for me! No sirree!
I agree though, Joel. And I'm so much can more forgiving of the naughty phrases when I know they come from Calvin. It's hard to be mad when you feel so proud.