Once upon a time, I decided to try to do some good in the world. So I looked online and saw that some faraway center for seniors was looking for someone to make personalized birthday cards for their home-bound residents. They explained these residents rarely see people and are quite lonely so things like this would cheer them. "Well that's for me!" I declared. And then they said they already had someone to do that but could I do some CHRISTMAS cards instead?? And you I said yoooou BET.

When I was a kid, I thought crafts were the lamest ever. I hated that at girls camp we'd spend our afternoon doing silly crafts of things I wouldn't ever normally want to have around, and that at the boys camp they were doing things like rock climbing and axe throwing.

Eventually, though, and probably right around the time I quietly confessed to my sister that I was ready to see Pride & Prejudice, I learned that crafts are actually KEY at girls camp, as it facilitates conversation and bonding time. Plus sometimes you can find some decent ones. But doing things with one's hands is sometimes the best thing for all of us, especially in groups of people, oftentimes mixed company.

So I signed on to do 100 cards.  This was in like, September.  I gathered a bunch of supplies, not really knowing how it was going to all turn out.  And then I did nothing.  And then in October I invited a friend over and we sat and made cards for about three hours. During this time she churned out about 15 or 20 and I had about 5 under my belt. It was then that I realized this might be slow-going for me, as I wanted the cards to be GOOD, and thoughtful, though I am no card critic.  But I was totally content to spend all this time on one card. Was it done? I didn't know. Let's sit and look at it for a while.

So I put it off some more, put it off, put it off, until about a couple of weeks before Thanksgiving where I was like, SEAN! SOS. AAAH. And we started making some more.  By this time I had a giant box full of all my crafting equipment--cards, paper, glue, glutter glue, pens, markers, stickers, etc.  And I would take this box to various people's homes and make them make cards with me. Once again, doing stuff with your hands is the best way to dive right in to easy conversation.

I ran into a problem and it was that I wanted to make these cards really something for these elderlies. Not just a card, but maybe something to read? And, as with all things, I REALLY wanted to make it personal, to include myself in it in some way but I knew nothing about the people these cards would go to, so I had to think of ways to include some Jen but not too much because, in the end I realized it's not actually about me.  I know, what?  My mom had saved a letter I'd written to her years ago and included some Christmas quotes just for fun.  I included these in the cards.

Also included was a short letter, a picture of me, Sean, and Julian, which is probably weird but oh well.  It was last year's Christmas card pic which is just a winner. Also was a folded paper with short, heartwarming Christmas stories I stole off of Buzzfeed and added to, myself. Folding, cutting, stickering, writing, printing.  And they're done. THEY'RE DONE.  I'm dropping them off today.  Let's look at some pics of my faves, because after all that, I've developed a close relationship with these cards. There are jokes involved, memories, and fondness all around. Also a deep, very personal love for chalk markers. You will see their magic in just a minute.

First, here is the table of cards, and this is not even all of them: 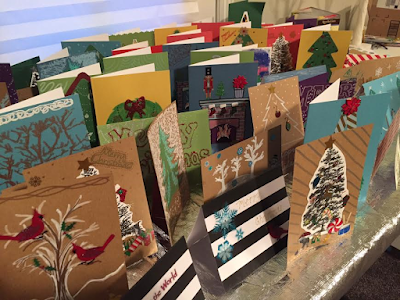 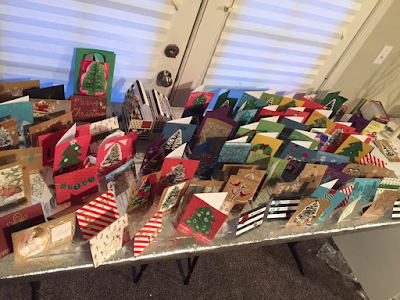 I added my new font I created, "flame," which I developed during the most boring and-i was told-mandatory meeting EVER on thermal cookerszzzzzz. Happily one good thing came out of it. Except this font sort of looks a little hell'ish which isn't quite what I was going for with these cards.

These next two I did and I was quite pleased with myself. I copied stickers of ornaments and spent a good year on each card I made like it. 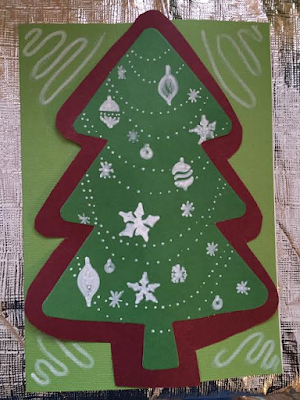 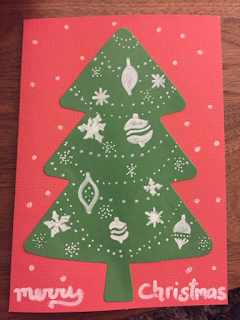 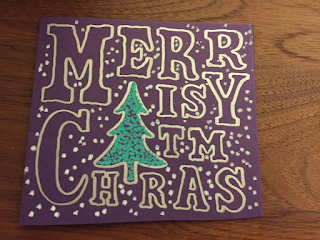 I guess I should just be putting all this commentary as captions. Oh well.  This next one was a stencil that I think was meant for spray paint because it was eternal but quite relaxing and rewarding: Oooo! Ahhhh! 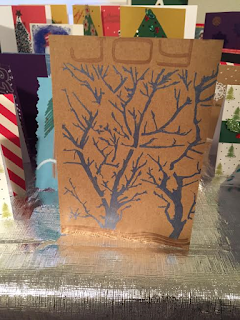 Here's one my sister made that made us all bust, and I love it: 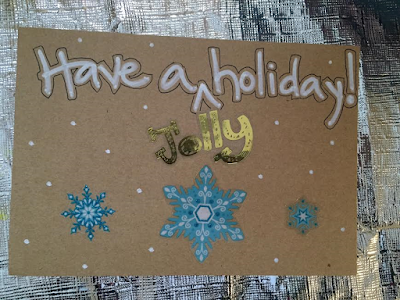 Ha ha ha. "Have a holiday! Whichever one, meh."

Sean does the most amazing things when he just sits and scribbles (with the amazing markers, of course).  I tried to copy him.  Good try, Jen. (obv, mine is on the left. Scraggle Tree.) Solid effort: 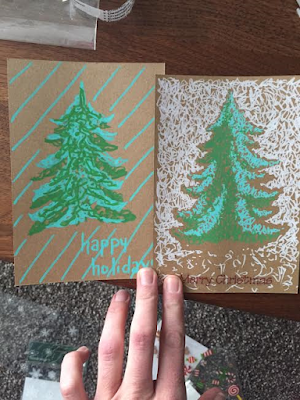 One of the early ones. This includes white glue for extra snow effect and again, was pleased with myself: 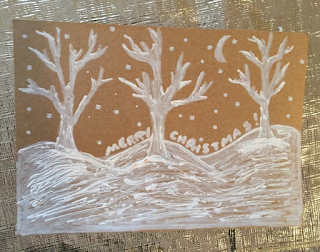 The last card I made: 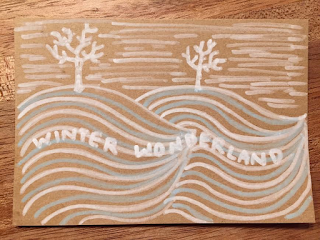 There were many other cards made by many other people that I didn't even capture because I am a selfish card-making braggart.  Even Julian made a couple.  And I have a few made by friends' kids which was so great. Ahhh cards.   T'was a magical, magical thing.