Remember one of my favorite games, the story game? Wait a second, I FOUND it, and it is hilarious. Go read up and come back.

The bad news is that that is still the worst drawing ever of a triceratops.  The good news is that I recently played it again, saved all the drawings and took pictures of them in full.  So let's get to it.

First, I have to say that I've realized I am not amazing at this game. I know, I know. But it's actually true.  I need to figure out a way to come up with good sentences that make sense.  Like the blind kids from the link to the old post. Why would a blind child enjoy a balloon?? I mean, of all things. That's just super sad.  Think, Jen.  Think.

This time around was the same.  I try to think of ridiculous things but this thing was basically undrawable.  Here it is, my sentence is at the very top: 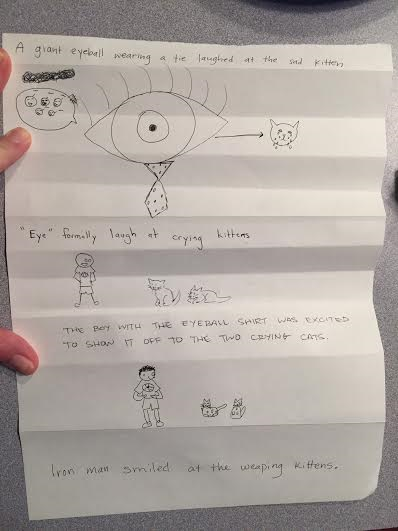 An eyeball was laughing?? An eyeball?  Nice try, Jen.  After the game we discussed how to depict such an impossible thing.  Sean suggested making the eyeball into a character.  I gave it a go. "Like this?" I asked: 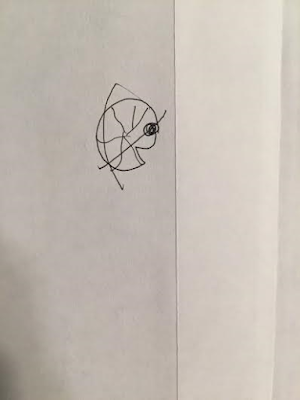 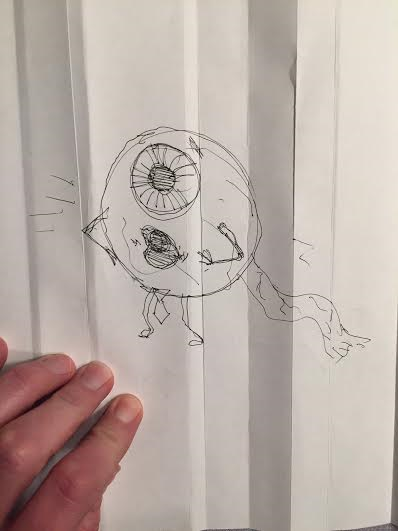 We all gave our input but in the end agreed that was pretty good.  I pointed out how the optic nerve looked like a superhero cape and now that's all I can see.  you know-- his little hands...on his hips.

Here's the next one. This sentence belonged to Sean.  I was to his left and was pretty pleased with my depiction. 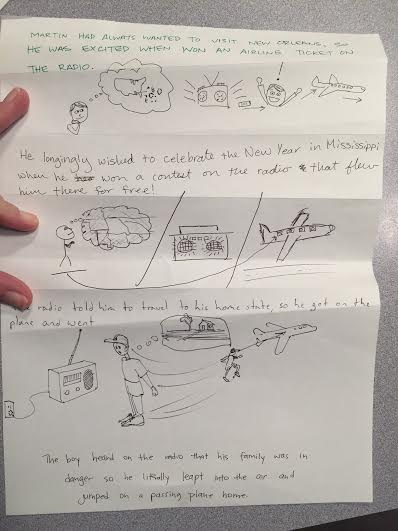 There were five of us in all and it happened that we all got the same one we started out with so we all drew on the same stream of our original statements, like Sean here, and the final sentence is my description.   Sean's dummy man made me laugh. 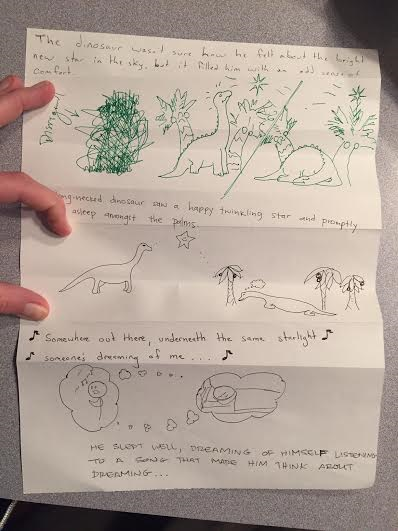 We all laughed when Dave realized (afterward) he'd failed to notice the word "dinosaur" for his drawing.  And Sean's line describing the final drawing both makes me bust a gut and my brain explode.

"He slept well, dreaming of himself listening to a song that made him think about dreaming..."

Ouch..hahahaha...aahhh it hurts... hahahaha.  It's so perfect. That's exactly what is happening there.

I also am not great at my descriptive sentences.  I'm much too literal.  I don't want to stray too far like some might feel inclined to do, but keep to the truth of the actual picture. But I don't need to be boring about it.  I'll just keep practicing.

This next one is a sentence Nishelle (yes, friends. I have met someone who's named after a Star Trek actor.  As you can imagine, we're buddies already.) took from a man who visited her class(?) who wrote Hallmark cards. That was what he wrote in one of his cards.  Yup.  ???  Apparently his child asked him if it was mean to call someone wise, (I guess he had been called that at school?) and he thought and pondered and realized that yes, yes it was bad. Because blah blah blah..kids should be innocent..blah blah. If they experience too much it's sad. blah blah. Yeah, I went ahead and explained the whole thing to you. You're welcome.  Here it is! 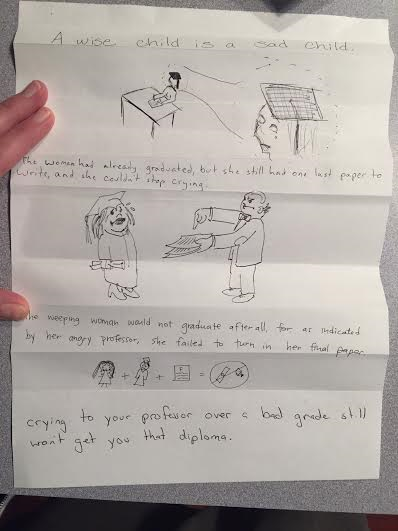 Excellent elbow patches Sean.  The first drawing on this one made me laugh. Scary scary study demons!  They will get you! And you will never escape them!

There was a fifth one but I guess I didn't snap a pic of it. As a bonus though, here's one from another recent game. I grabbed it and it's been stuffed into my backpack for days so it's a little crumply. Hopefully you can still read it but mostly it's Sean's drawing that SLAYS me. 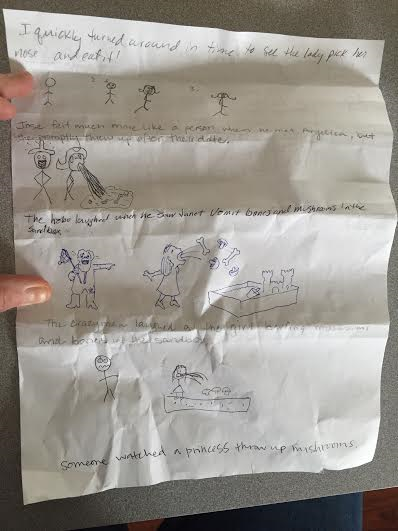 Here's a close up of the drawing:

"The hobo laughed when he saw Janet vomit bones and mushrooms in the sandbox."

Hhahahaha... also EW GROSS !  hahahahahahaha.    The hobo! And his big boots and knapsack! hahaha..  bones and mushrooms.. SICK.  This is now my new phrase for when I feel like I'm going to puke.  Just for an added touch. You can use it too.

See? See how vivid that is? See how it makes you want to actually vomit right at this very second?   Oh man, so so funny.   Right in the cute little sandbox all over that sandcastle.