I'm just going to go ahead and say that my new favorite game is the Story Game.  Is that the real title? Who knows. But i know that i love it, and I know that i'd play this anywhere, with anyone, if just given the chance.  It is a game that = guaranteed laughs, and hard laughs too.  That's the best kind of game, in my opinion.  And one that is a race, which this isn't.  And a game where I win, which, there is no winner with this game. Why do i like it again? Oh yeah--FUNNY. So funny.
I played it a few times recently and only nabbed a couple of pictures before tossing the drawings which we should never have done. These things need to go into some kind of funny vault for dark and scary times because even people who didn't play looked at them the next day and had a good laugh.   They just make me happy.
First, let me explain the rules so you can enjoy this game yourselves.
The more people the better. I'd say at least 5 and 8+ is a good amount. Give each person a sheet of paper.

Step 1:  each person writes a sentence at the top of the paper. It can be anything, but it should be relatively short and describes a scene of some kind.
Step 2: pass the paper to the person next to you.
Step 3: that person then draws whatever that sentence is describing. The drawing shouldn't be too large--in a 2-inch high space or so, depending on how many people you have.
Step 4: when everyone is finished, they fold down the sentence so only the picture is visible, and pass the paper to the next person. That person then writes a sentence describing the picture.
Step 5: then they fold down so only the sentence is visible, pass the paper, and so on and so forth.  It is so funny to see how the story develops. Sometimes it can amazingly stay more or less consistent but mostly it morphs drastically and people are left to helplessly describe atrocious drawings or draw impossible things.
Step 6: When you make it all the way around and are given your original paper (you'll just have to figure it out somehow), it is time to open them up and behold the magic of the game.

So, my favorite is to have Sean sitting to my left, so he can draw my sentence.  I love it.  Here's one of them: 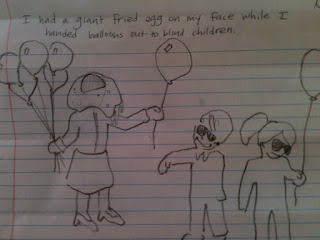 Hahahahahaaaa.. those blind kids--hahahahaaa!  I'm sorry, i'm sorry! I'm not laughing at blind kids! But I am... i so aaaaaammm!  Sean said, "that one is reaching out, happy to get something but he doesn't know what... the girl is holding her string, not knowing what the hey this is..."    It's like he knew how blind kids would react to getting a balloon--and i laugh--I LAUGH.  I'm going straight to hell. The eggface is just a nice execution, but it's the blind kids that really gets me.
So, you're playing the game, and you're goin' along, goin' along.  You think you don't stink so bad at drawing. You're like, yeah, i know what this looks like.  Or DO YOU? Or DO I? I DON'T KNOW WHICH ONE--anyway, WOW.  I am so hit or miss with my drawings.    It was late. We had been well into a round of the game. I was tired.  I have no excuses. All i know is the longer i allowed my pen to touch the paper, the worse everything got. Much much worse. When it was time to pass the paper i said/whimpered to my sister-in-law, "I'm sorry, Chris. I'm so sorry!" 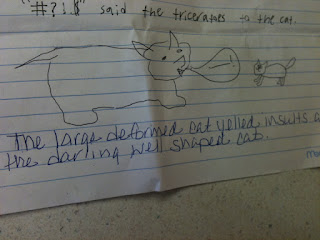 When it was time to open up all the papers to examine/critique/laugh, having read the previous sentence that was hidden to her before, she blurted out, "Jen! That's supposed to be a triceratops?!?"
I crumpled on the table and in a pathetic fit of despair I shrieked, "I know! I know!! Burn it! Destroy it! I'm so ashamed........."
Seriously. And I claim to like dinosaurs!! Even someone who hates dinosaurs has seen one at one time in their life. Have i never?!? Aaagh, it hurts, it hurts.  But it also hurts because of all the laughs, so I guess it's worth it.  I took a picture of the entire page of this one, so you can see the process: 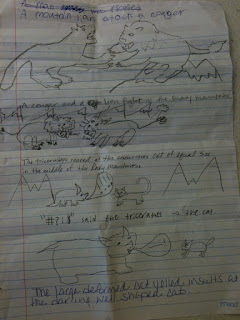 I don't know why i didn't take pictures of all of them. Seriously, the next time I play, i'm going to because I'm convinced they'd be funny to anyone.  So get ready! And go play today. (at my house)

Okay, Jen. You write the sentence, mail the paper to me, and I will draw the picture. Then I'll fold the sentence down and mail it to the next person who wants to play.

Also (and this is a slightly weird thing to say, by the way) I have you in my Google Reader under the folder: My Favorite Blogs, and there's only like 8 blogs given that special recognition. So it's a big deal and, yeah, I kinda like you. Um, now this is awkward. I'm sorry. The end.

I love this. But I think I need to make more friends first...

(Argh! A bunch of my sisters were just here-- why didn't you post this BEFORE they all left?!?!)

P.S. My sister who loved Titanic? Yup, that was Natalie! I'm a horrible person for "outing" her like this, but I can't resist!

Love this game. It's produced some of the hardest laughs I've ever laughed. And if it makes you feel better, my version of a triceratops would be much worse.

Joel, if only you were serious. I would do that in a HEARTBEAT. Everyone could send me their address and we'd just go down the line. C'MON!

Kim, you should know that would never be awkward. There's no such thing when it involves praise of me. Besides, you know the feeling is mutual.

It was Natalie?? Ohh Natalie, i thought we were friends!! ;)

There's no way anyone could make a worse drawing. Everything about it is wrong. The horns are weird ears. He has this scary grin mouth. He has paws... gaah.