Well, t'is the season for one of my favorite holidays.  Hallowdays. Hallowed Days. (see what i'm doing?)  I love Halloween. In case you've forgotten, here are some links to remind you of just what it means to me:

Click here to read about Julian as a toddling zebra.

Or the time I accidentally invented THE BEST cookie recipe of all time.

Or when I wore the best mom-made costumes known to man and fought for my candy, and life.

General Halloween hodgepodge but if you don't click on it, you're going to miss THIS.

And let's not forget about Sean's Titanic. Oh, how I miss those Titanic days. I knew they wouldn't last forever. :(


Now that we are country living, sort of like Diane Keaton in the film Baby Boom, when she suddenly gains custody of a baby and moves from the big city to the country and starts making applesauce to sell because she's trying to adapt and be country-y, I've been trying to immerse myself in what I view as a country living practice, and that is crafting. Decorating. It's new to me.  And I'm going to brag about it here, today.  I'm going to craft brag, or crag. Because it's my right to crag.

I've learned a lot about myself this fall.  One thing is that I actually succeeded in finding candy corn palatable. I'm pretty proud of myself. And, the people who make non-food stuffs in the candy corn color scheme, its only appropriate form. The candy, at its very best, is good for decoration. It makes so much sense to expand on this disgusting Halloween icon: 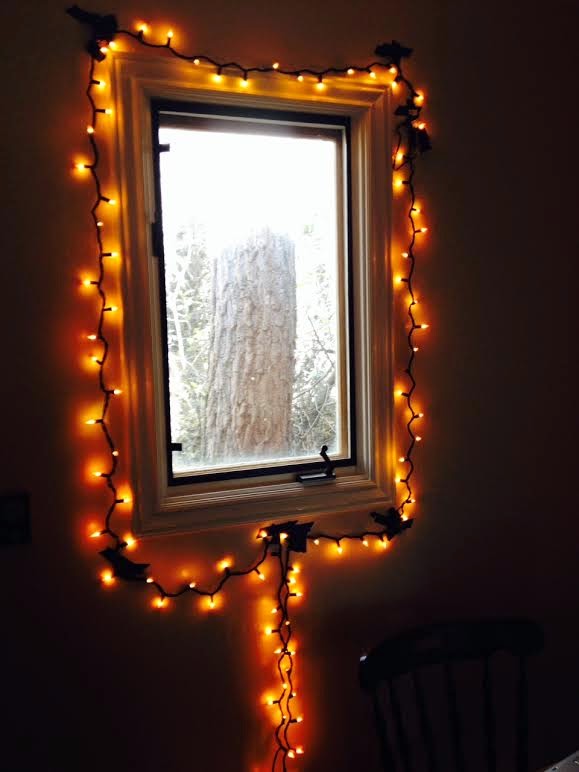 Flipping through craft magazines because I guess that's what I do now, I snapped a pic or two of some crafts I thought I might try. Out of the pics, only one idea came into fruition, and I have to say, I'm more than a little pleased with these. And I can't promise to take them down after the hallowday is over. 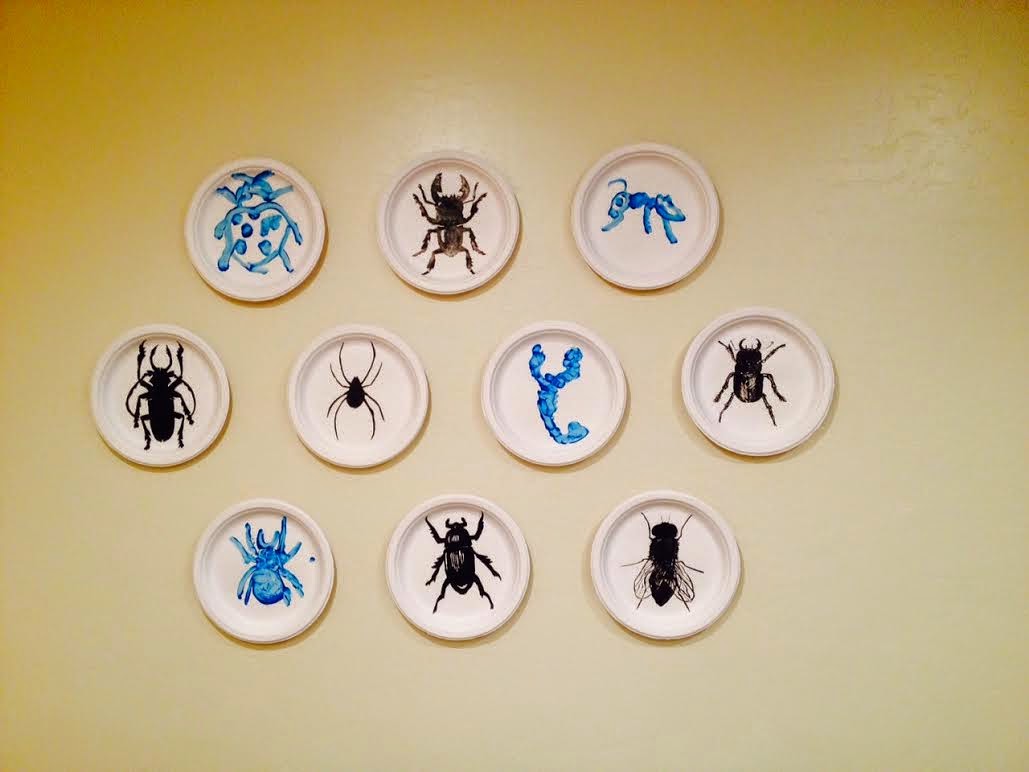 Oh boy, I love our bugs! Sean and I each painted three, Julian painted four.  Can you guess which are whose?  Here's another thing I learned. I'm not half bad at painting bugs! I surprised myself, actually, and felt pretty proud. And excited.   Sean had this cool black-as-night ink and it was so much fun. And eerily therapeutic, painting bugs. You really should try it.

Julian's are sooo cute. I love watching him draw and paint, something he's never really been remotely interested in until lately (sorta). I have these tubes of paint with fine point tips. I drew the image and he painted and spread it around. 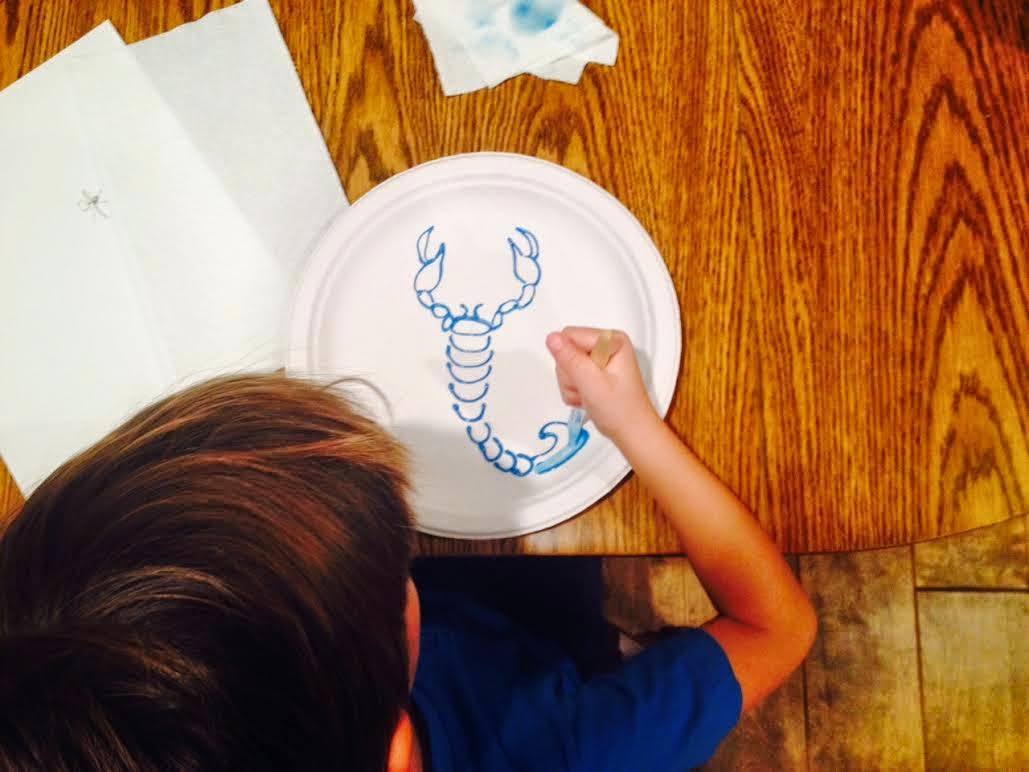 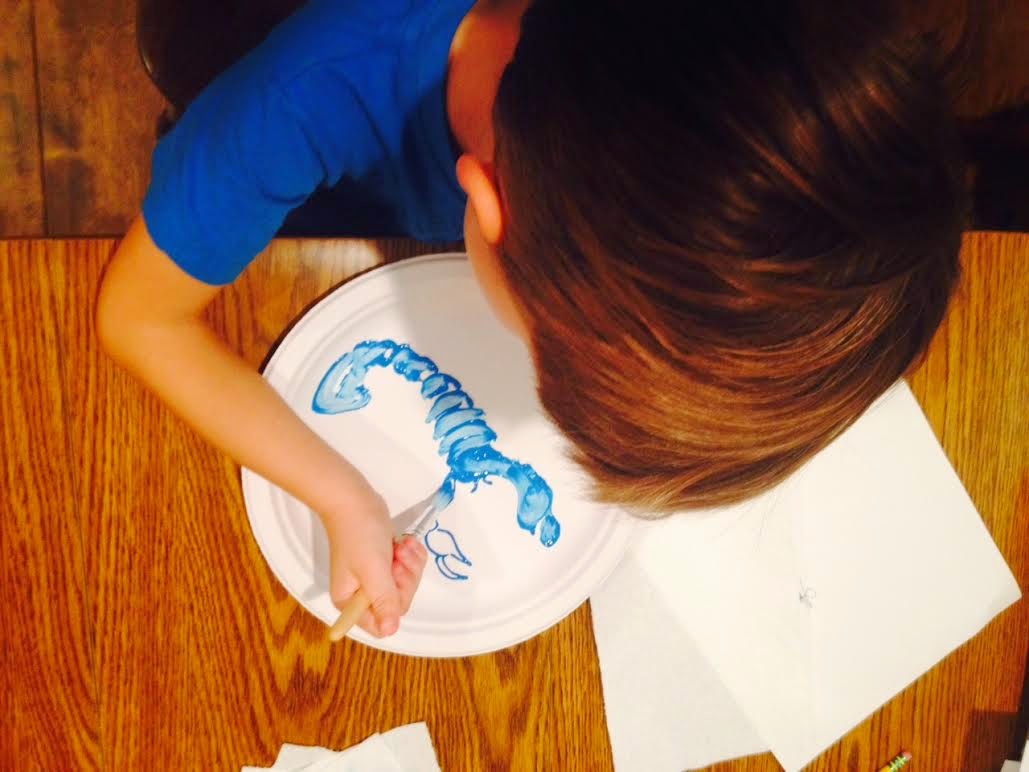 Which one is your favorite? (no really, which?)  His wolf spider is probably the creepiest. Look at that thing! (lower left) Yikes.Turned out better than I could have done. Or is it?? Because look at that fly!! There, I said it. The fly is mine.  I just can't help myself. It's good, right?? C'mon, I worked so hard. I had to make the wings see-through for crying out loud! Ahhh I'm such a craggart.

Here are mine and Sean's close up: 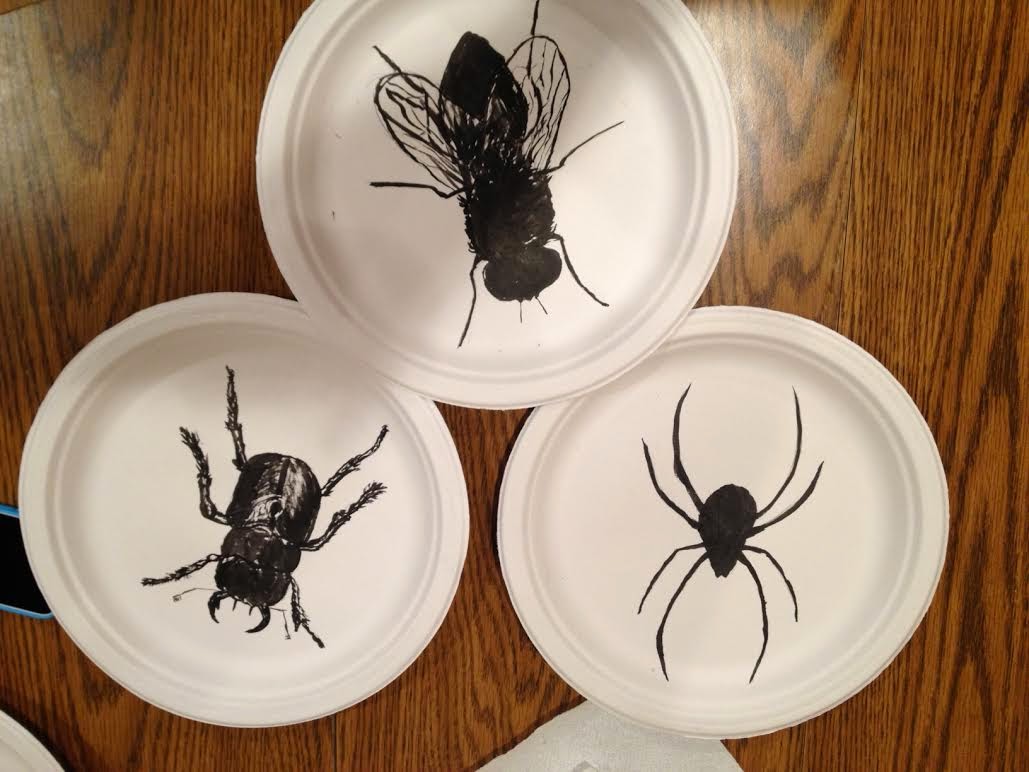 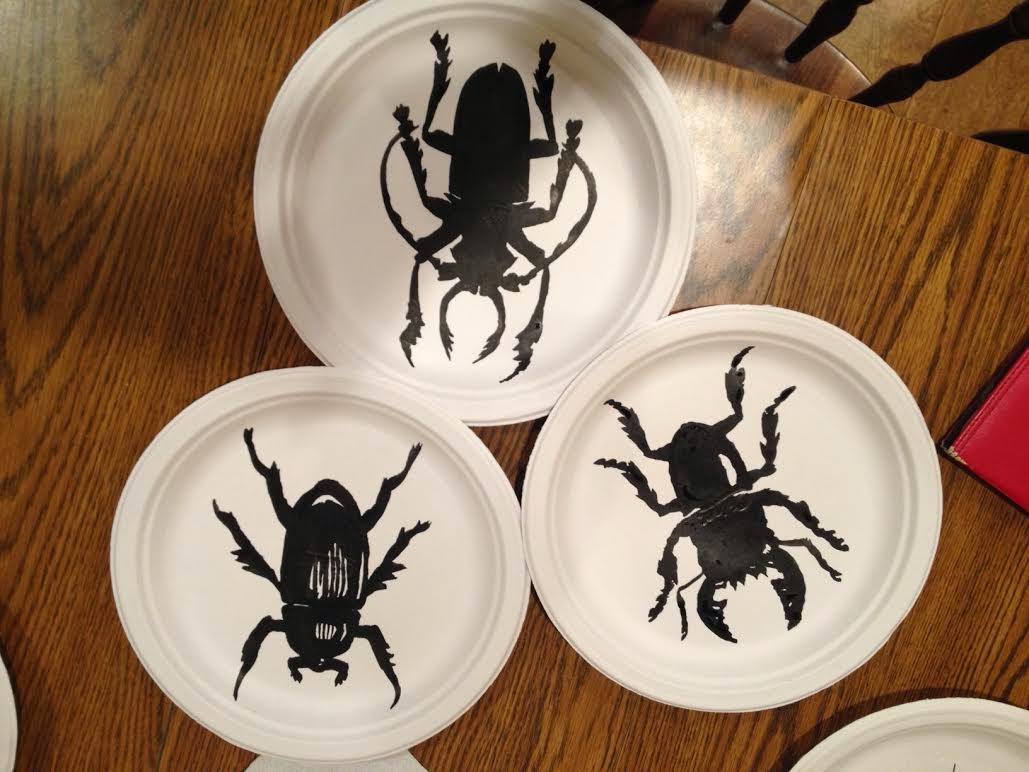 Beetles are so cool.

I didn't even realize the spider i'd selected was a black widow. I just looked up a pic of a spider and saw that one and thought, ooo, that's a good one! Hopefully i don't come face to face with a real or i'm dead meat. Or am I? because now I know. Thanks, crafting!

Another thing I learned more about is my personal style of Halloween decor. Not the cutesy crafter, I lean more toward a little gruesome, morbid, perhaps grotesque? Last year walking through the brownstone neighborhoods, I found myself impressed by gory doorways decorated with blood and weapons. I guess it just reminds me of Jen's Yard of Horrors of my youth, when i'd decorate the yard with dead people/newspaper-stuffed shirts and pants half stuck in the earth, etc. Sigh. Happy times.

In light of that, this next craft turned out so amazingly, you could say i'm delightfully creeped out. Since we now live in a cottage in the woods, and not wanting to buy much of anything for crafts, I got this idea to make skeletons out of sticks. Skeletons are an excellent decoration. But why not take a step further in your crafting and practice your anatomy knowledge too! It's decorating AND learning.  I told Sean and, as prime executor of my ideas, he scouted around and somehow found the perfect limbs and twigs for our skeletal limbs and bones.  We taped the joints together with duct tape and spray painted it all. I couldn't think of anything for a head and, turns out, they didn't really need one. They were eerily anatomically correct, because Sean is a wizard. Here they are, the twins Mr. Bones, who bring me a lot of joy: 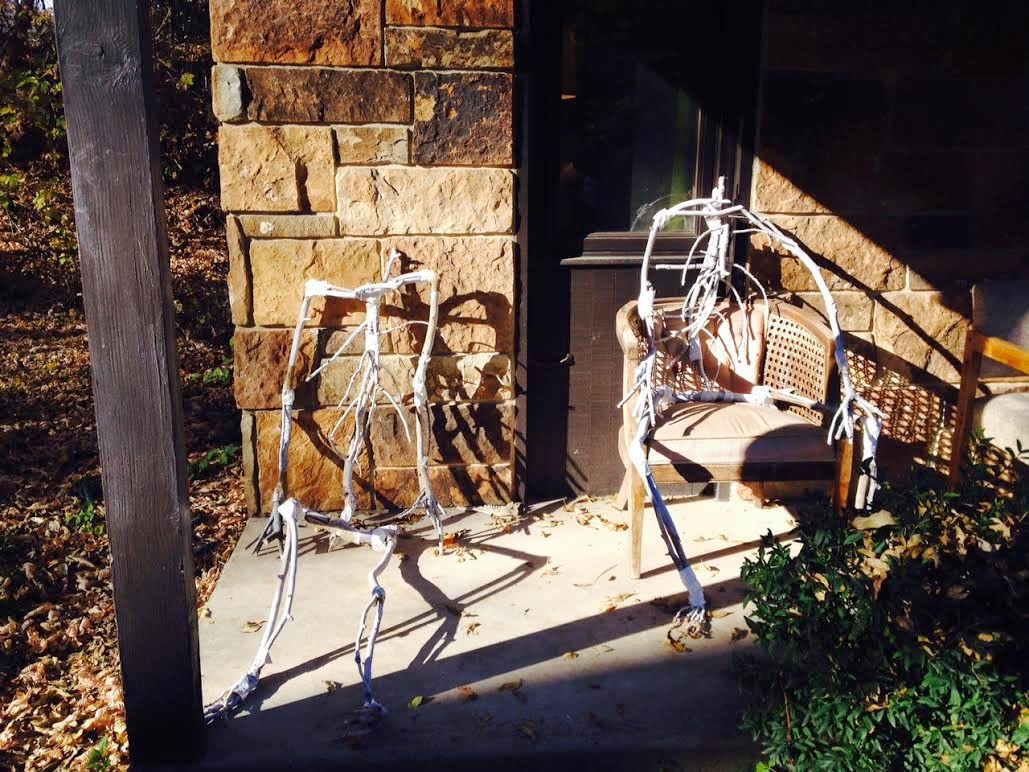 Hmm, looks like Mr. Bones' ribs (on the right) have gone askew.

Let me tell you, it was really weird how quickly they felt like real skeletons. Posing them and handling them was pretty gross. And when we taped the foot bones to the ankle, Sean couldn't bring himself to clip the toes so I did it. I'm a little nervous to say that it was a little bit satisfying, in a sick, sadistic, torturous kind of way.  h-happy halloween? heh... :/

Hang on, i have some artsy pics of them. Here: 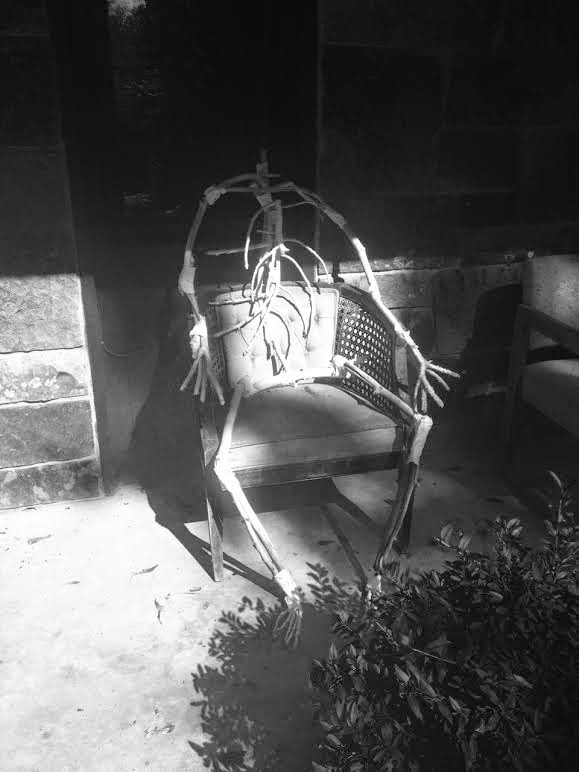 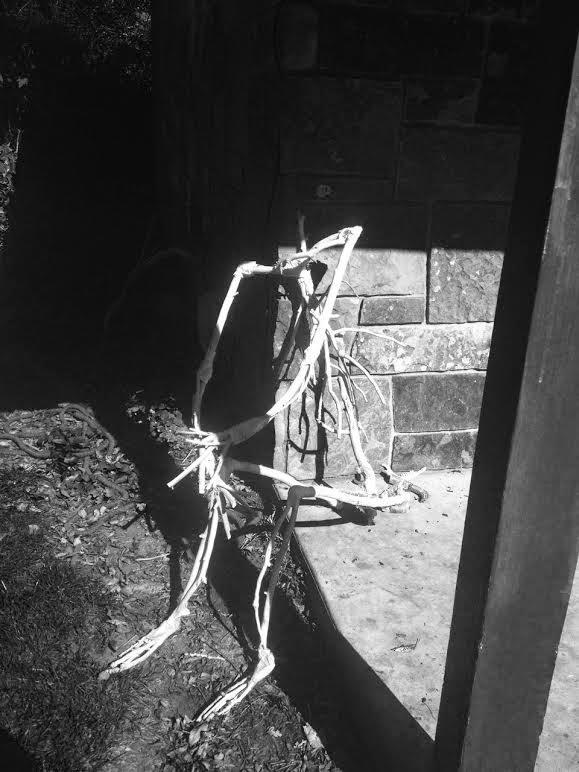 I did purchase some tiny skeleton hands though because, why wouldn't I. Couldn't think of what to do with them until we decided to dangle them from the roof. 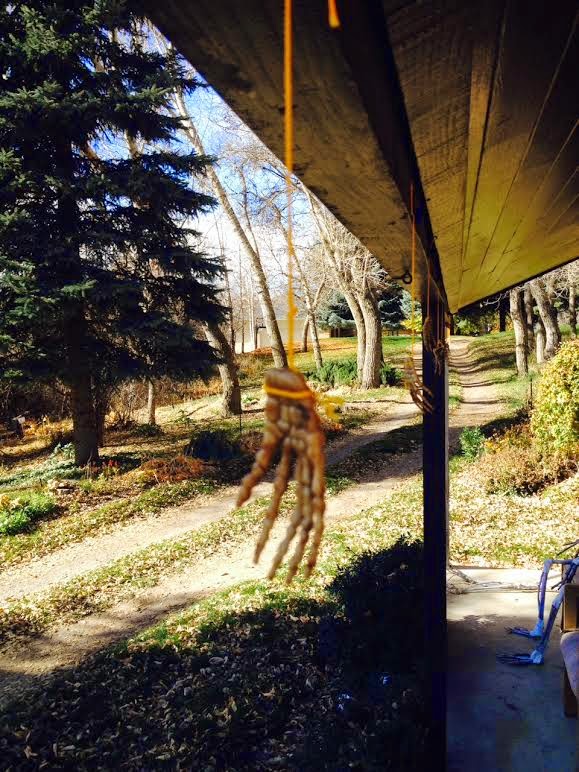 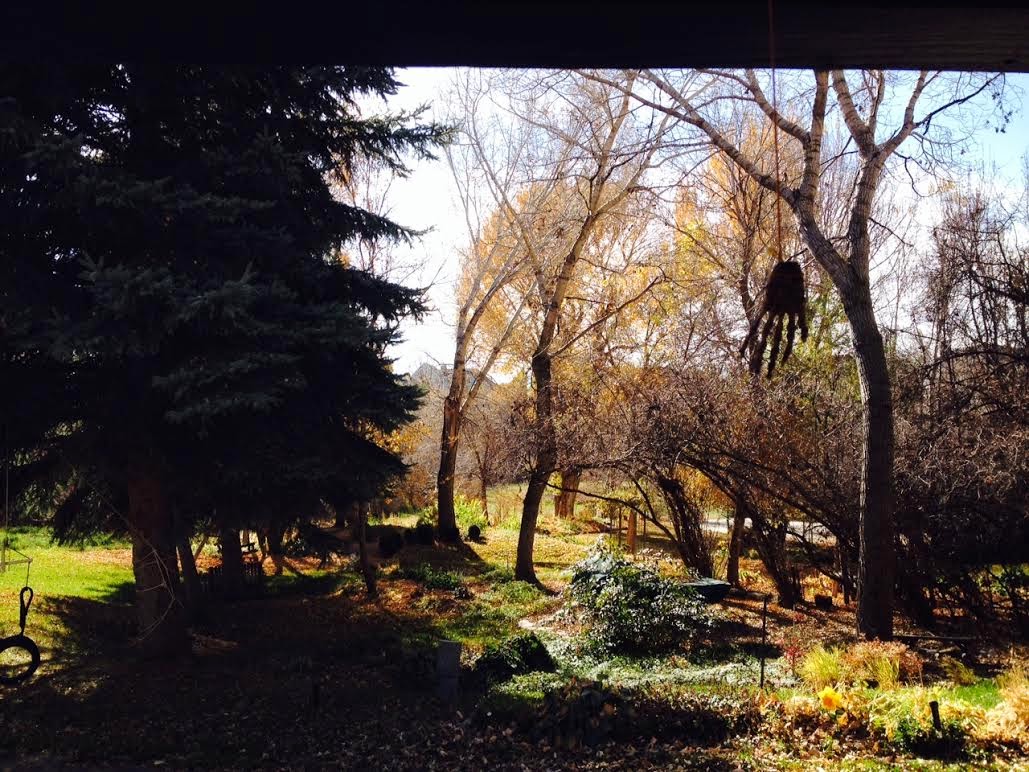 One of nature's beauties, just a severed skeleton hand, blowing gently in the breeze.


We painted some glass jars and made little jack-o-jars. Pretty cute: that guy on the right thinks he's hilarious.

For carving pumpkins, we got two giant pumpkins this year. I was just kinda like, go big or go home. I don't remember the last time I carved a pumpkin. Many years.  First time for Julian which was kind of embarrassing and appalling for all. But we had no place to put them where we lived! 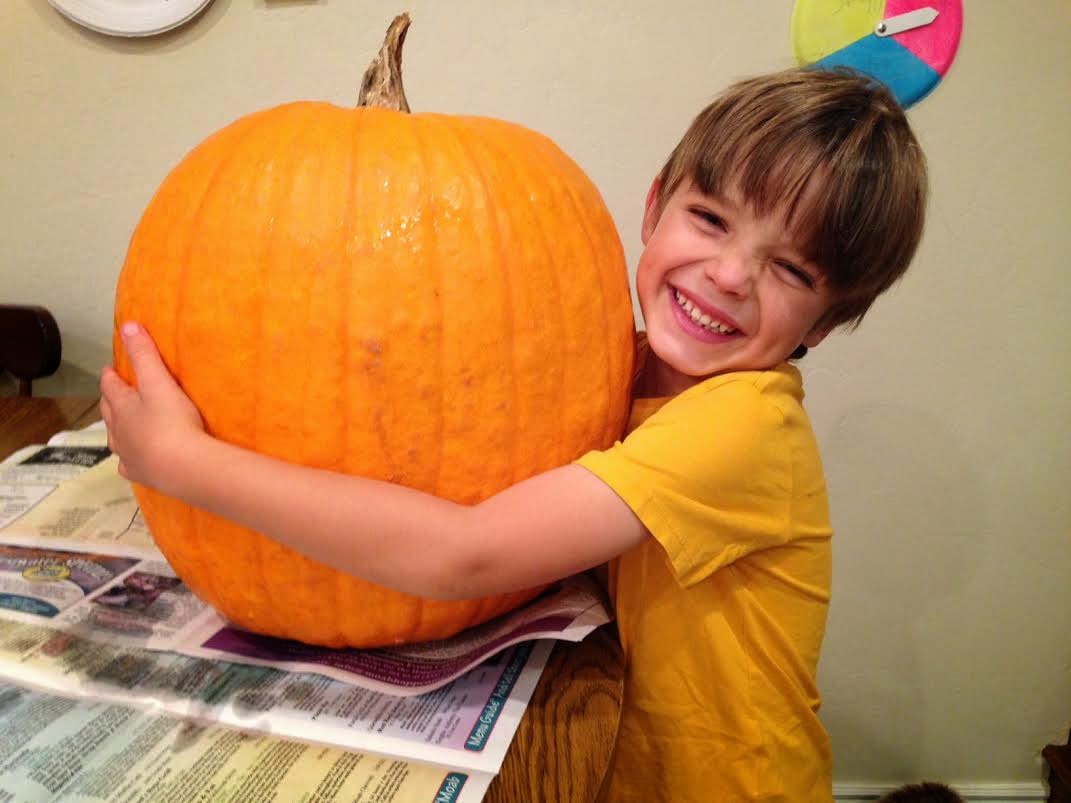 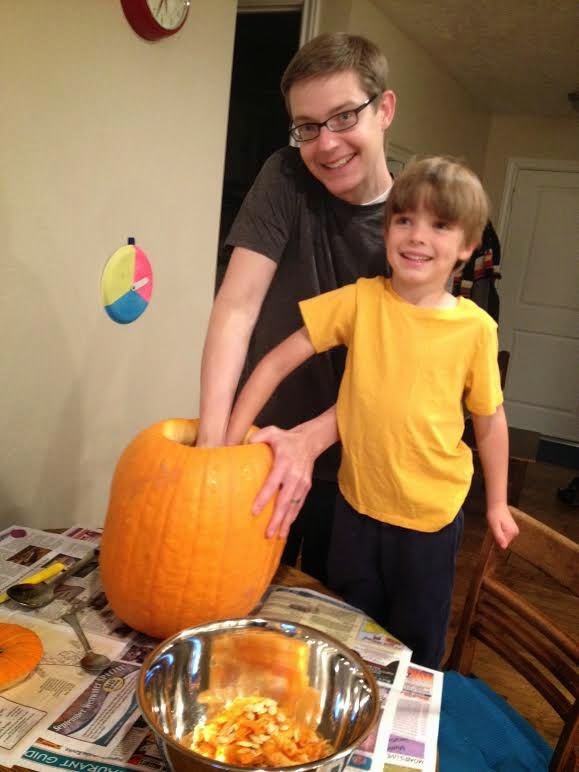 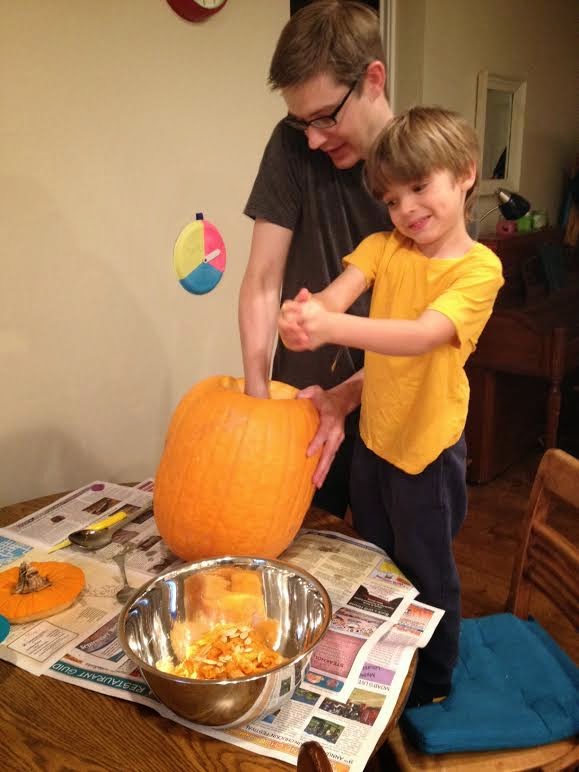 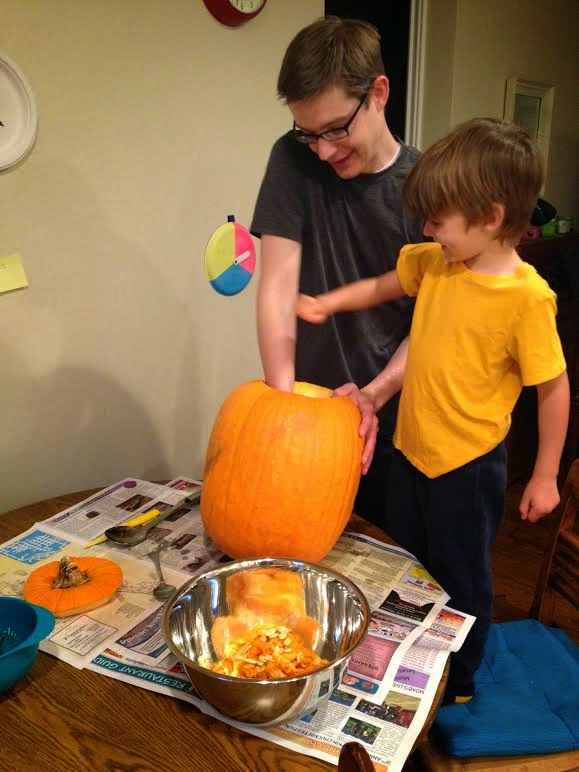 Sliming Sean's arms with pumpkin goo, one of the worst things
you can do to a human. 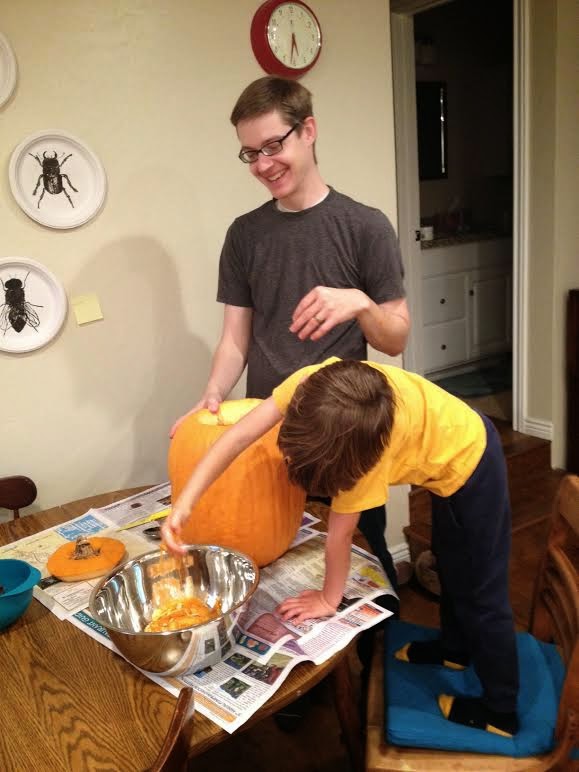 Julian drew the sketch for the happy guy and then requested a cyclops. Nicely executed, Sean.  My contributions were jagged top that you can't see and the scraping of innards.  I will say, isn't the smell of pumpkin guts so delicious? I LOVE it. Smells like fall, like happy, like childhood. 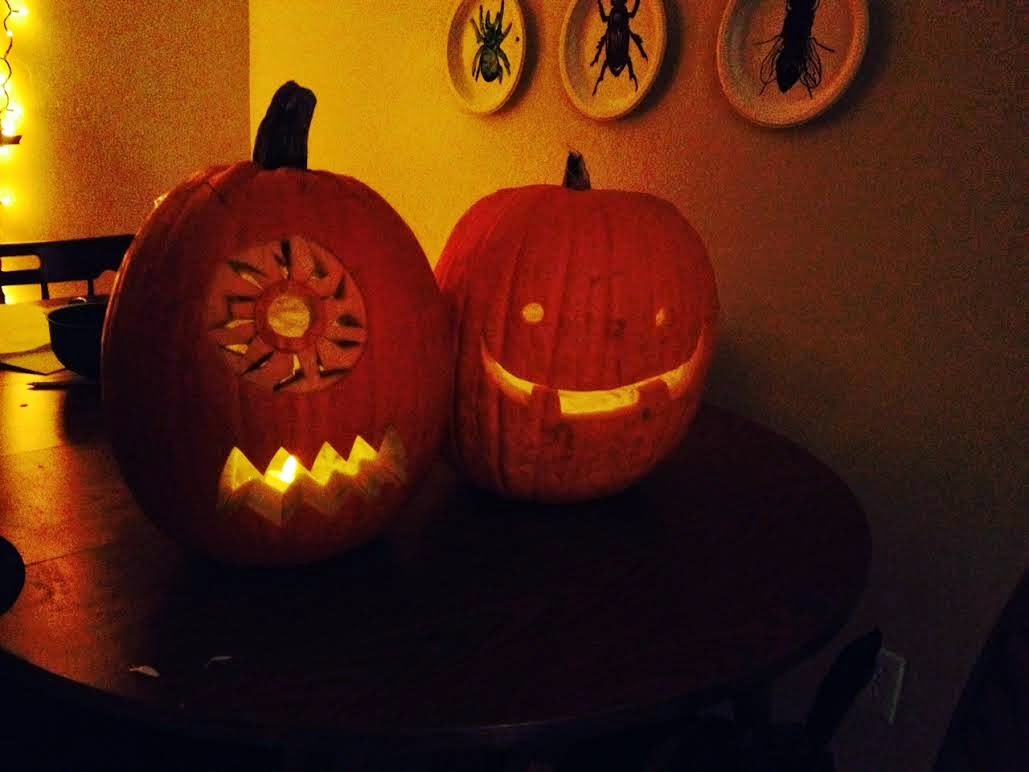 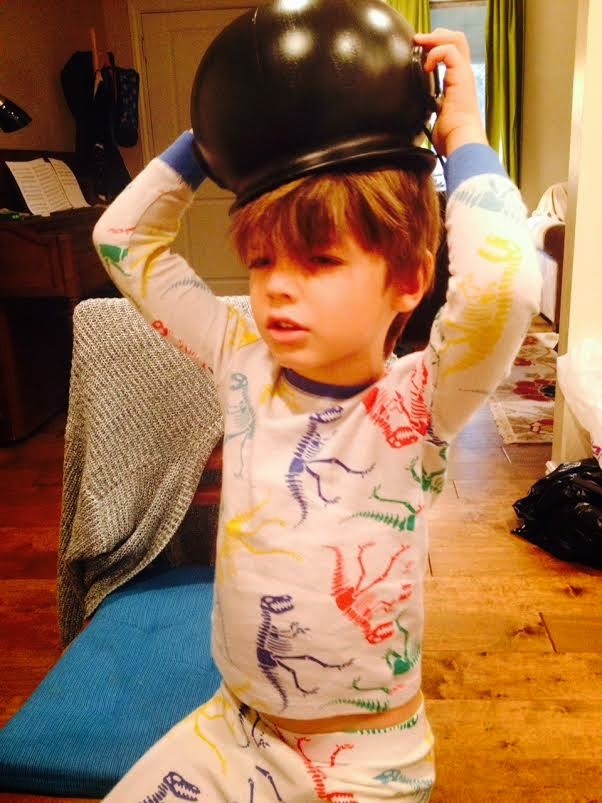 We were finally able to participate in the big family party and tradition of apple uglies. We've tried to spread their gospel wherever we could in years past and it was great fun to be there in person this year.  My mom goes all out on the candy, each year with different variations for face-making possibilities and experimentation.

Here are our apple ugly self-portraits: 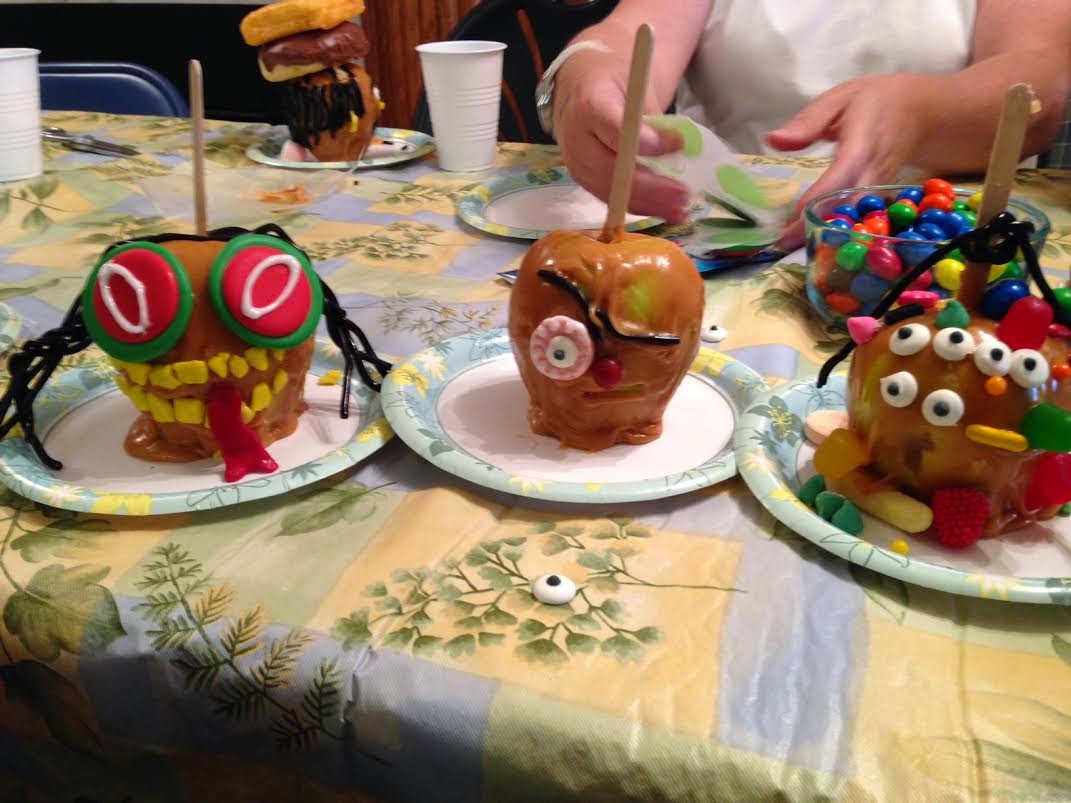 jen, sean, julian
Everyone was aaaall impressed with my tongue until they heard how I got it.  I'd like to see YOU achieve perfect tongue color and texture without chewing up a couple of gross Razzles. With great art comes great sacrifice, man. 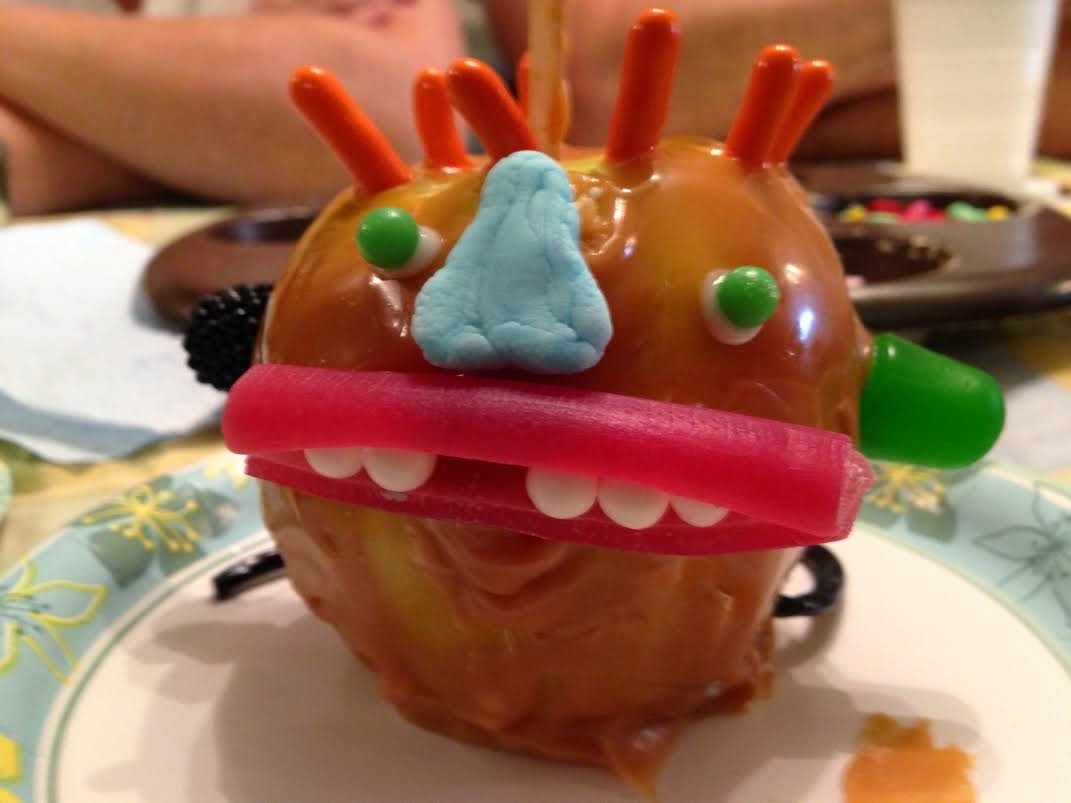 Also, check out this dry ice cider! Put it in a clear container, people! Blow your freakin' mind.

So golden! It was magnificent. 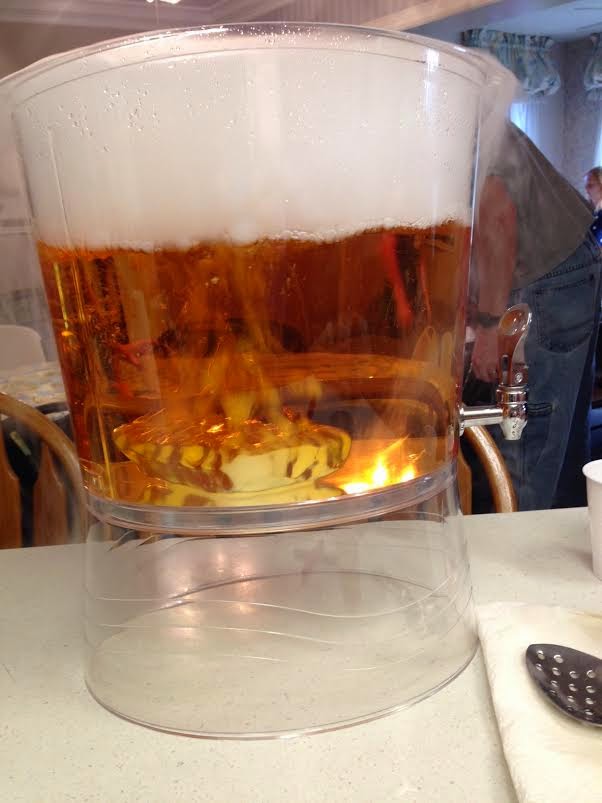 Now, as for Julian's costume. I have to say i had some concerns this year. There would be no topping the Titanic, and that's ok. Each Halloween is different. No comparing from year to year. That said, this year's is pret-ty great. Sean is amazing.

Julian wanted to be a dragon. If he'd wanted to be Smaug, I'd have gone as Bilbo Baggins but it didn't really turn out that way and it's ok. But... pretty great dragon, Sean.

He added to an already existing dragon costume, tossing the wings and making his own: 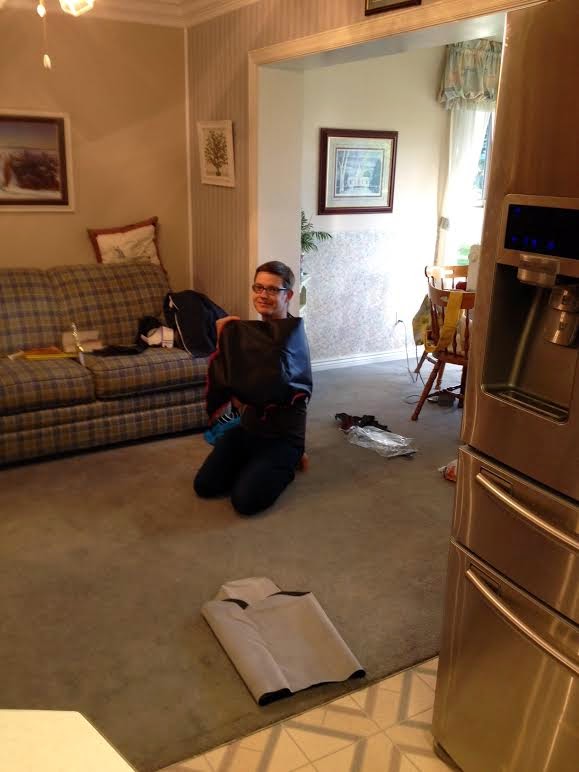 The inside was to be glittery red with black leather on the exterior.

And took the mask, cut it up, and added his own sort of hat on top of it. He hates to crag, but check it: 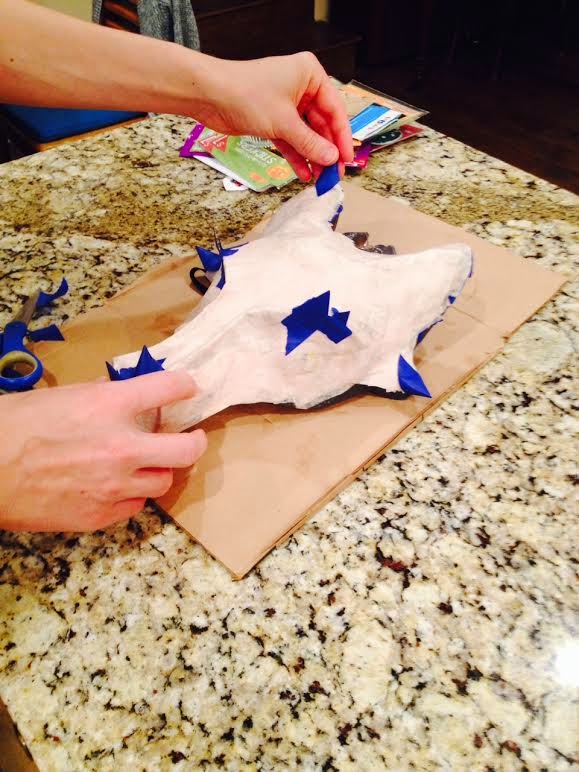 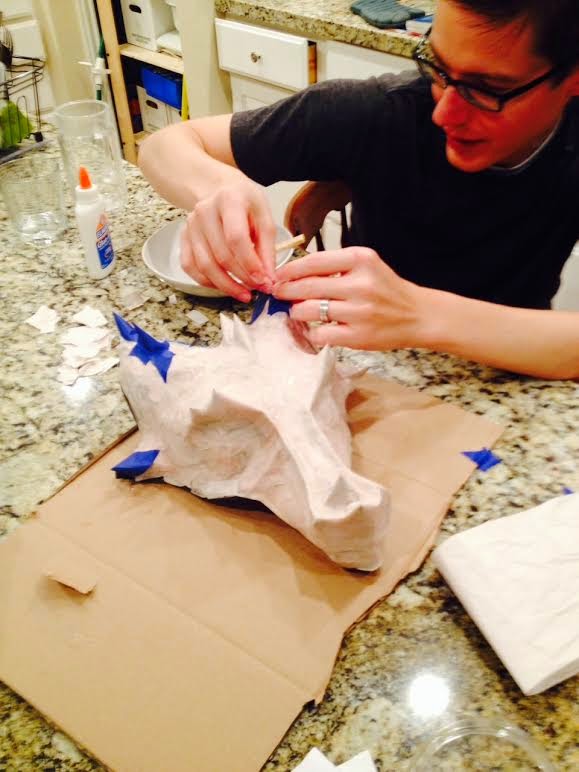 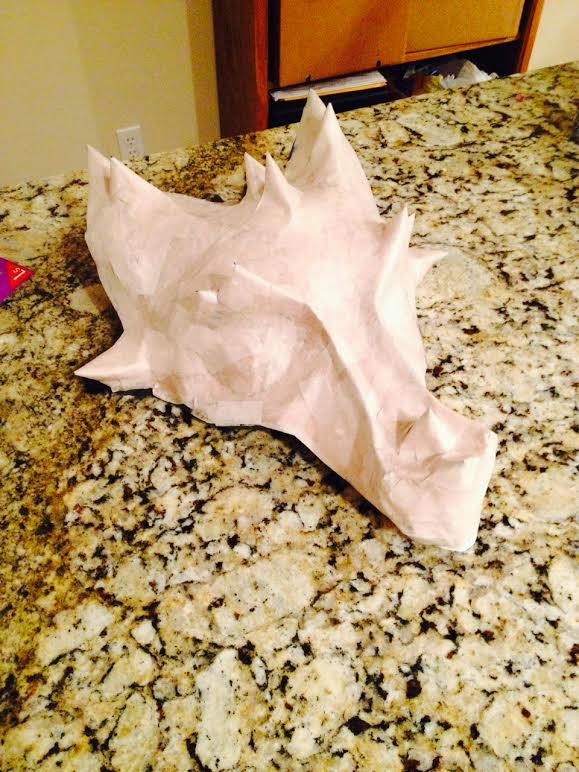 what the fudge? I don't know how he does it, you guys. Don't ask because I DON'T KNOW.  He is constantly whipping things up with whatever scraps we have lying around.

First white paint, then sparkly red spray paint. made us want to spray paint everything with this stuff. 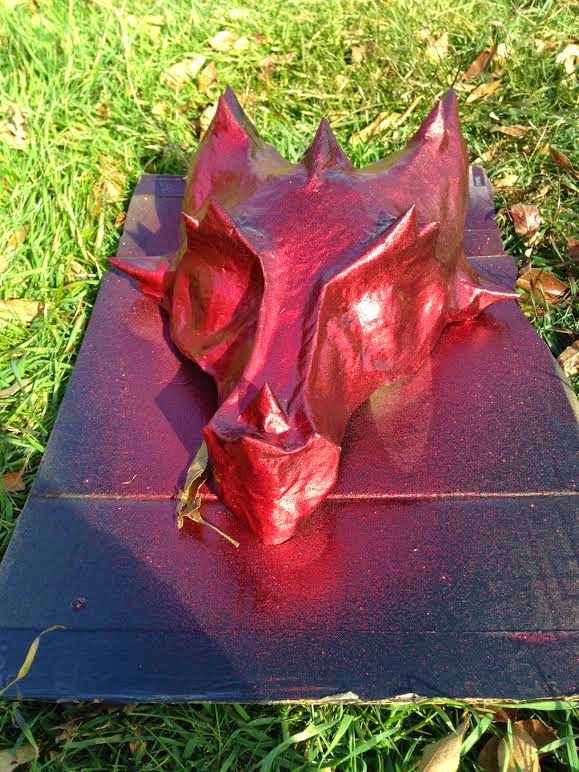 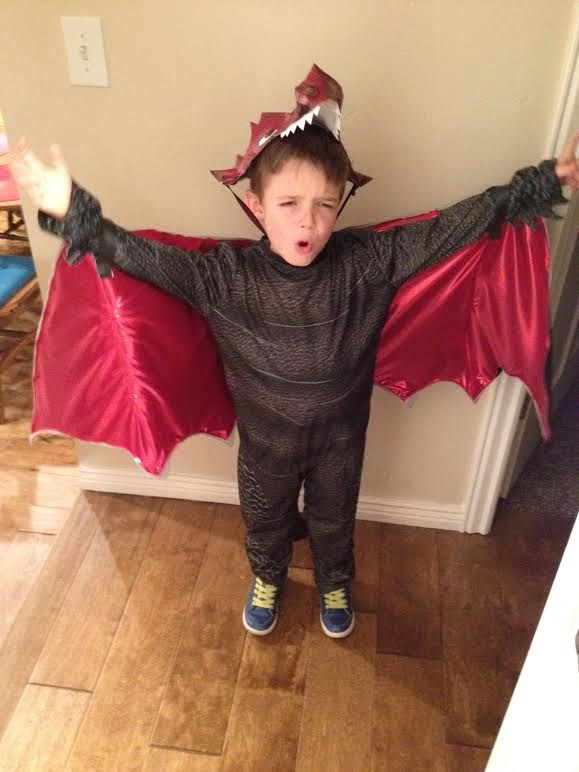 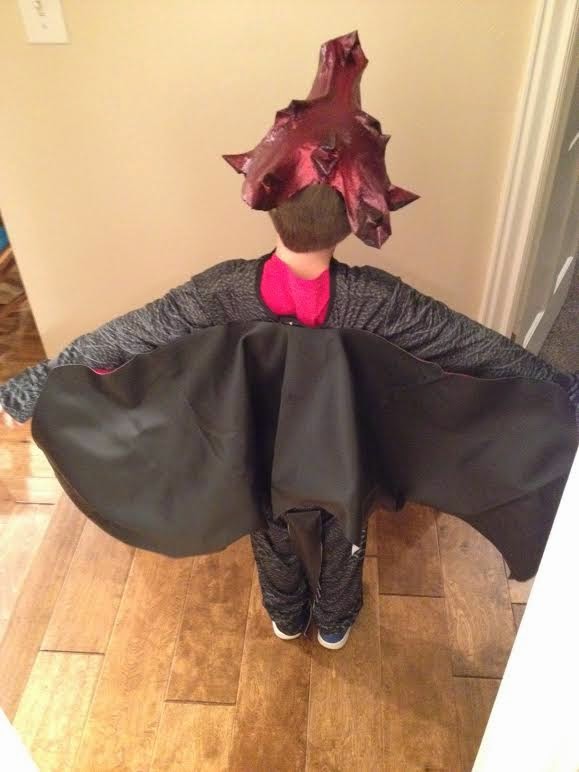 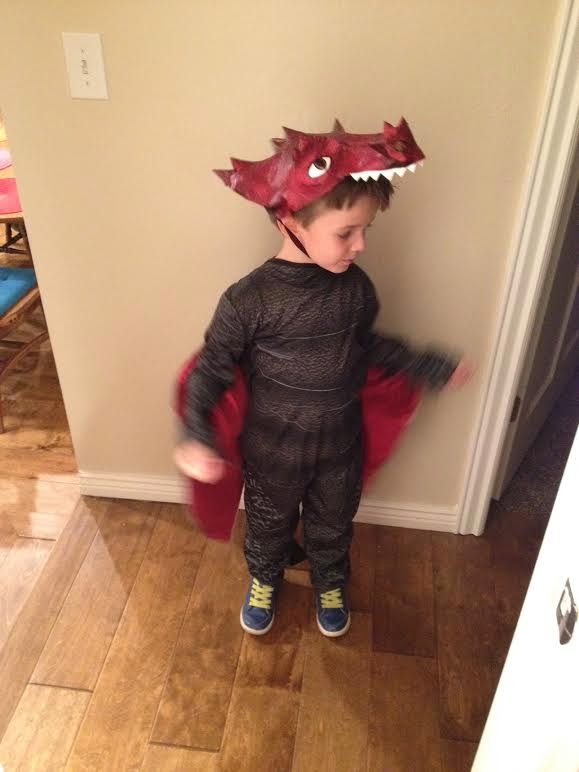 I'm ashamed to say it, but I was kind of losing faith in Halloween this year. Until I read this post :)

The whole time I read this all I kept thinking were "Beautiful Savagery" - which I wasn't aware was a thing, but now I know is.

Also, I'm so over using words coherently. Where's the fun in that?