When "Trick or Treat" is the New "Please"

First off, this scared the poodles out of me today: 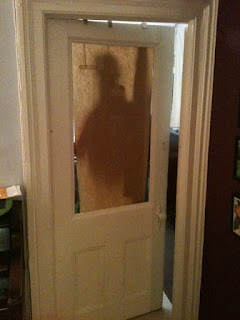 nothing says happy halloween like a true accidental scare when you're all alone.  Thanks again, Julian's coat.

And, we've spent the days leading up to Halloween watching the exact same part of Twilight for the past 3 days in a row.   Last night on the verge of death i mumbled, "i just wannasee a new scene-zzz.. thaaz all i ask zz.. a new scene....zzzz...."    On one of those times, Sean said the following:


We don't have to watch this, I just...can't be the one to change the channel.

And then just now I walked out to where Sean was and saw he was watching it again, the exact same scene. I laughed and he said, "don't judge me."   I don't, Sean. I don't.

Sean and I prepared 30 caramel apples for an apple ugly fest. I was exhausted, too fatigued to take proper pictures of everyone's apple, which is sad.  I barely mustered enough energy to bust out this bad boy: 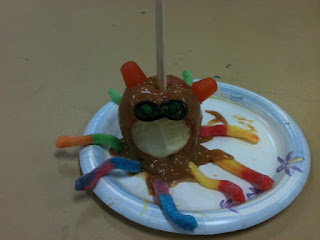 The Octo-Bandit!  With wonky ears for good measure.

Julian has two costumes this year. First, he went as Sean: 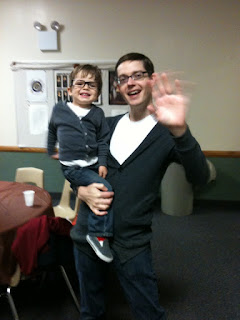 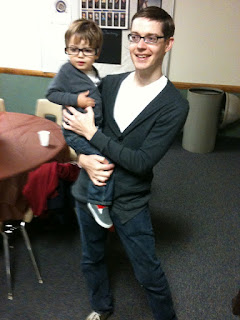 Amber's face was amazing, even more than usual: 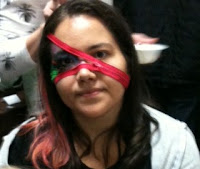 A zipperface!! Someone made a comment which she said "nailed it:"    80's on the inside. So cool.

Julian was also a zebra for Halloween.

We went out on Friday and i thought, hey, it's Friday. Feels like a good day to be a zebra.
We took the bus to Barnes & Noble. 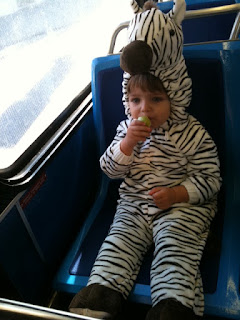 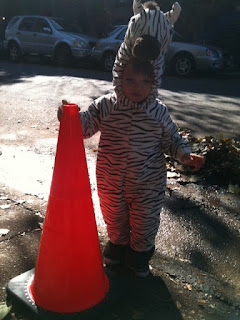 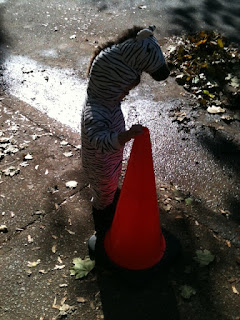 It was so fun to be out and about in costume. He was such a celebrity, i tell you. I held onto his coat tails.  Or just his tail.

Oh, we didn't win the pie contest, by the way.  It's alright. Our heart definitely wasn't in it, and it was much more fun to make a stupid gross pie in 20 minutes rather than sweat and cry all day over a perfect pie that wasn't going to win.  This one was bananas with ganache and some mini peanut butter cups thrown in. I called it Monkey Fudge Tracks.  Ha ha ha.  Monkey fudge. 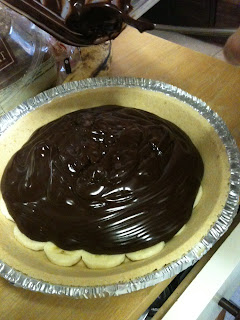 We also made another custardy pudding pie and got another good Sean quote:

It's a pretty handsome pudding once it loses all its lumps, isn't it?

Someone asked me a month or so ago if we were "so excited to take Julian out trick-or-treating" and i was like, "ehh?  Wha?  Oh, i guess we'll do that."  For some reason i hadn't really thought much about it.  Which is weird because I normally love Halloween. I guess I forgot that the gap between our definitions of fun and what makes us happy is ever growing smaller.   So tonight before we went out Julian and I practiced.

"Now, hold out your bucket, and then what do you say?"

"yeah! And then they give you candy! like this!"   and I threw a Nib into his bucket.  I felt good correcting his good manners in the spirit of Halloween.

And i have to say, it was adorrrrrable watching him go out.  We stopped at all the shops and a few houses where people stand outside with their candy to hand out.  No doorbell ringing in these parts.  The sidewalks are packed and it was insanely fun.  Julian would come back to me and squeal with glee.  Love that. 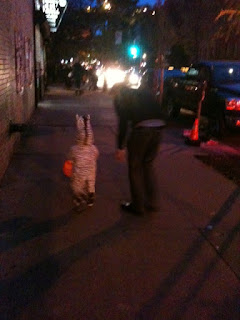 There was a costume parade on the street we were on.  There were a few totally awesome costumes at at the end, people are invited to join in.  We didn't join in but we did watch a few ambulances. Watched them a little too long, for we are now all blind.  But pretty worth this cool picture: 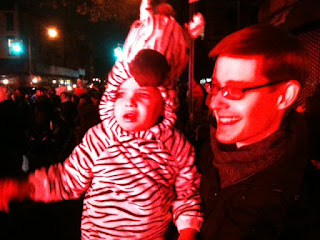 A giant in the parade: 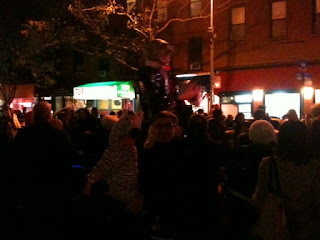 Here's a quote from the night.  A man was carrying his son on his shoulders who was pointing to Julian saying "Tiger! tiger!"

Yay! Happy Halloween!
I love the Sean costume AND the Zebra costume!
And how cool is Amber?

Your apple ugly got an lol from Anna. And then she said, "That is hilarious!"

Here's a message she wanted to type for you:

i love you jen.

now did she actually laugh out loud or just say "lol" ?

She laughed, but it was very genuine. She was delighted at the sight of it.