Alright, listen. I know what I just said about not caring about Beyonce, but since my not caring stems from an anthropological curiosity about society, I felt it my duty to do a bit of research. I haven't found anything groundbreaking but I'll let you know when/if I do.  Meanwhile, the title of this post comes from a comment made by Beyonce's stylist who was reacting to her latest pixie cut.   Having just typed that sentence is making me really depressed, but it's not as depressing as when I clicked on page TWO of the comments section of the Beyonce haircut article on people.com, which is the moment I realized I need to seriously re-examine my life. (but again, let's chalk it up to research. It ain't always pretty, as scientists always say.)

Also, before this is taken out of context, let me be clear-- her stylist does care about this earth-shattering new haircut, a lot. She is mourning the loss of all those lovely tresses, but she's trying to come to grips with it and trying to convince herself that it's fine, it's all fine! Heck, maybe she'll cut her hair too!

But everything is NOT fine.  She's struggling. But let's move on, if we can.

Recently I cut my hair.  It was a great decision and I haven't looked back.  It has made the summertime just a joy, I hardly even know what shampoo is-- I can go days and days without washing it--BONUS-- and I realized that having a short cut made me feel more like... me.  I like long hair, who doesn't? But a strange thing happened when I cut it and I can't really explain it. Maybe my new haircut matched who i am inside. Maybe it appealed to my disdain for the act of cleanliness. I don't know. But it feels nice. I had cut my hair this short before, but not since I was a sophomore in high school when I wore long plaid shirts and ill-fitting everything. I had just seen the new James Bond movie Goldeneye and wanted to look like Natalya, the hot Russian computer tech. Though I didn't quite achieve that look, I still enjoyed my short hair.

But this post is not really about short hair, it's about the getting there.  It's an in-depth post about me and salons, because apparently I always have something to say. As great as it's been, I will, however, agree with Nancy from the comments section (page two) and say that the one downside of short hair is the maintenance.   I hate getting my hair cut.  Well I take that back. I don't mind getting it cut. It's the finding of the place every few weeks and trying not to spend $$$ for a cut I'm pretty sure I can do myself.  I test this theory but giving self-cuts every now and then. The problem is, my hair's so short, I can't look at it while I cut it. I try using the mirror but I'm usually wearing my glasses when I do this (for no reason) and I can't get the angle right to see clearly, so I end up just cutting absolutely blindly.  It works ok but the hair, it grows like weeds after a rainy day.

Finally I decided it was time to go back.  Here I am the day before the cut, happy with Sean and friends at the park.

The day was glorious and perfect for a parknic.  An evening lovely though one promising to be uneventful suddenly took a surprise turn and emitted a light so glowy-yellow and soft, I felt certain we had all been real-lifed instagrammed.    It was shocking. 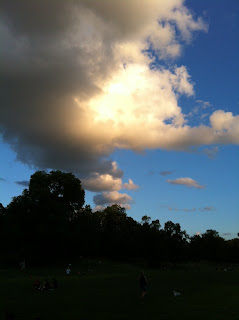 The next morning I purchased a groupon and made my way to Random Salon, on the east side, NYC. There I met David who was... let us say, middle eastern european because I really have no idea. David wore a pony tail, was very friendly and very excited to do my hair which he shouted at me and demanded to know if I felt the same way.  I never know what to think when this happens. Are you really excited to cut my hair?  If so, is this because you're excited about being a stylist? Or are you excited about cutting my particular hair? Or are you just generally an excitable person?  Anyway, it had been hot out and once I stopped melting, I got my hair washed and we chatted the usual pre-cut chat.   Here's where I am:

I usually don't really care too much about what's done.  I have had bad cuts for sure, but I am very forgiving and I know hair grows and for the most part, I get it cut for clean-up purposes only. Not to get a new style but to hack off 3-4 inches of disgustingness, for example.    I wasn't sure how I wanted to get it cut this time. But I was definitely open to something new and funky. I always want to go funky but somehow I can never get this across to stylists. They usually play it safe, I think because they are afraid I will be upset and I even tell them, "I won't be upset."    So, we had some back-and-forth banter mingled with serious discussion.  He asked me if I wanted to do this or that and I hesitated while I thought and he paused and very intensely said, "Jennifer. Let me tell you something."  And he explained what he was thinking about doing, why he wanted to do it.  Amused, I laughed, and told him that I trusted him, "i won't be upset" and to go ahead. Green light.

So he did.  He cut for like at least an hour, I swear.  I have never had a salon experience like this one. Most stylists are a bit intense only because they are concentrating i guess.  But I often sense some hesitance in them, or perhaps a lack of confidence?  Not so with David.  David began and the entire cut definitely told a story.  The beginning was slow, methodical.  Then the pace picked up, scissors flying. There were twists and turns and red herrings. I'm trying to guess what he's going to do next. I think he may be going one way when suddenly he takes a completely different route. I sit there watching him cut the right side of my head shorter... and shorter.. and shorter still.  He was so skilled, dancing and flitting around me like a fantastical, magical salon nymph. I enjoyed the experience but not in a lazy, calm way I am accustomed to.  I was enthralled the entire time. By the end he was juggling scissors, spray bottles, combs and brushes, snatching one and throwing the other back in the drawer in such haste, I was afraid something would happen, someone would interrupt or distract him and the spell would be broken.   At one point he was blow drying my hair and cutting it at the same time.  I exclaimed, "whoa! impressive!"  All of his tools seemed to be flying through the air.   He would completely fold over my ear, repeatedly, with fervor, to get the hair behind. Unusual, I thought, but I was amused.  Every once in a while he would whisper instructions and then when I complied, he would whisper intensely, "thank you, Jennifer."

The nearby stylists sat to observe, making comments. It was a spectacle and a show and I am not sure when i've been so entertained, ever, let alone at a salon.  He was a pleasure to watch and I could see he was talented and was very passionate about what he did. I think that's why it was so exciting. I was front and center at a moment of creation.  I was excited to finally watch a stylist let loose because I felt like I accomplished something. I was a vehicle, a means for someone to really attempt to master their art, to allow themselves to be challenged creatively, to have free reign to do it.  And suddenly I realized my purpose in salons. I will be that person!  I will let someone experiment.   I sensed in the beginning that I could let him do what he wanted and though the cut is pretty crazy, it's also pretty cool. Funktastic, even.  Regardless of whether or not I'd choose to get the same cut again, with performance art like that, I definitely got my money's worth.

Here are the pics I took in the men's restroom at a nearby Babies-R-Us (it's a long story), the teeniest bit shocked from the after look. 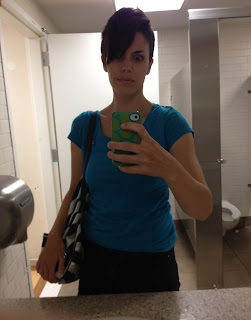 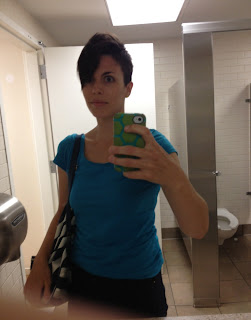 It's suuuper short on the right side, a tad longer on the left, with swooping hair coming from who-knows-where and he put some weird foam in and gave me a sort of faux hawk, all in such a way that I would never ever be able to recreate it. 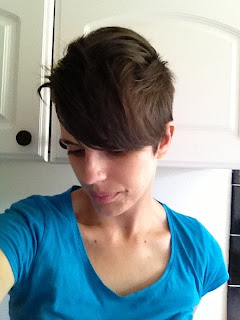 1. Delightful piece of writing. Made me feel like I too was observing this show, amazed, taken aback, surprised. Wow.

2. So THAT'S why you texted me the picture! I didn't quite know how I was supposed to respond. "Is she happy/sad/surprised/ecstatic?" The last picture helps me see that this was no "Great Clips" haircut, but a masterpiece indeed.

These are actually wonderful some ideas in the blog. You have touched good quality points here. In whatever way continue writing.
best hair extensions for fine hair 2018

I am visiting first time to your blog awesome post you have written, Thank for sharing.
long island city barber