Our card this year is a super weird one. A weird brainchild that took much time, thought, and consideration. Sean called it my passion project and I suppose it's true. They are my thing and I love them dearly. And Sean puts much time and effort and coaching into helping me birth my weird brainchildren.

Remember that funny incident when Julian came home dirty and we told him to take a bath and I was reading Calvin and Hobbes at the time and I accidentally called him "Calvin" and the whole scene taking place in our lives strangely mirrored the one in the strip I was reading and I was like, what is our life? Is our life this comic strip? Are we Calvin and his parents? And I concluded that we were? Remember that? Click here for a refresher.

Well, we turned that and this interaction into a strange Calvin and Hobbes strip of our own and made that our Christmas card.  Here's the message we included in the card:

We bought Julian his first Calvin and Hobbes book when he was like, three years old. While I would never, could never regret this decision, I also could never have predicted how intensely Calvin would influence Julian's developing personality. In short: He is Calvin reincarnate. Over the years, he's blurted out ideas, raging frustrations, made poignant observations, uttered phrases or nonsensical passing comments to me that, having grown up on ALL the books myself, I could more or less successfully attribute to the comic strip. "Hey, Calvin" I would say. I also started to realize how similarly our lives mirror the one in the strip. He has a beloved cat who serves as friend, foe, sibling, and furry pillow. Sean has a lot of the same mannerisms as Calvin's dad, which are oft teased. I look like his mom but would like to think I'm a lot more fun and engaging. But it's truly eerie, the parallels. This year, while the boy is still relatively young, we'd like to do a special Christmas card tribute to what I think should be required reading in school, the greatest comic strip ever made. We've incorporated real life scenarios with real dialogue into a comic strip of our own, making adaptations and personalizations. It was a collaborative effort, with outlining our real life strip (with exact dialogue recorded the time it took place), then searching for appropriate comics throughout our books of just the right expressions and settings, which was more difficult than one might think. We sketched out how we'd make changes which were then made painstakingly on the photoshop. It was an intensive process and a ton of fun, and also even more scary when we read through each panel and discovered even MORE origins of Julian's being and everyday dialogue.   Here are two examples of our lives weirdly coinciding with the lives of those in the strip. The first incident took place three years ago, when he was 9. The conversation on the back between he and I took place earlier this year.  We hope you enjoy it and celebrate the holidays (and Calvin and Hobbes) your own special, weird, magical way.  MERRY CHRISTMAS.
And here is the card: 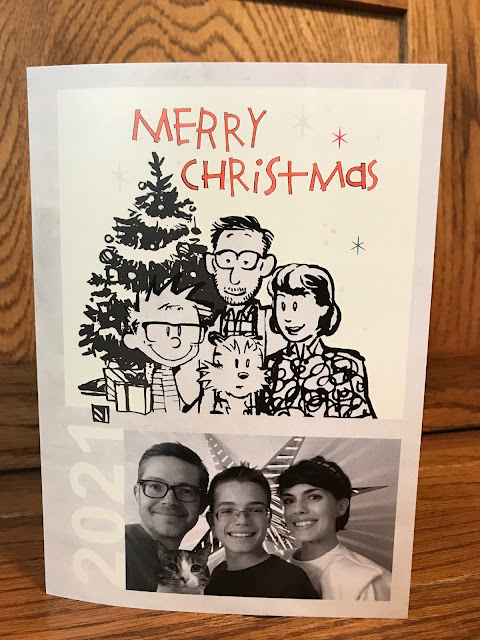 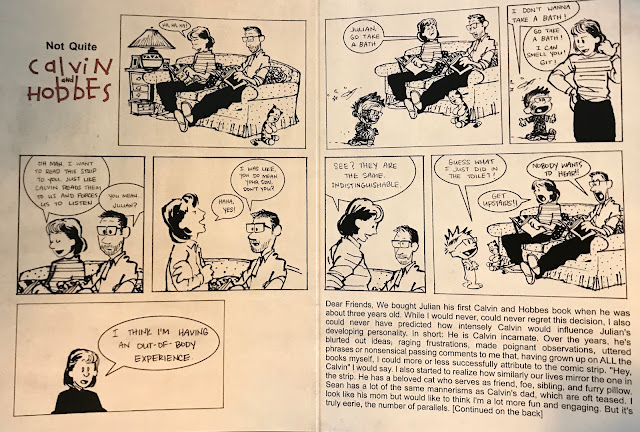 I hope you can see that.

And here's the back: 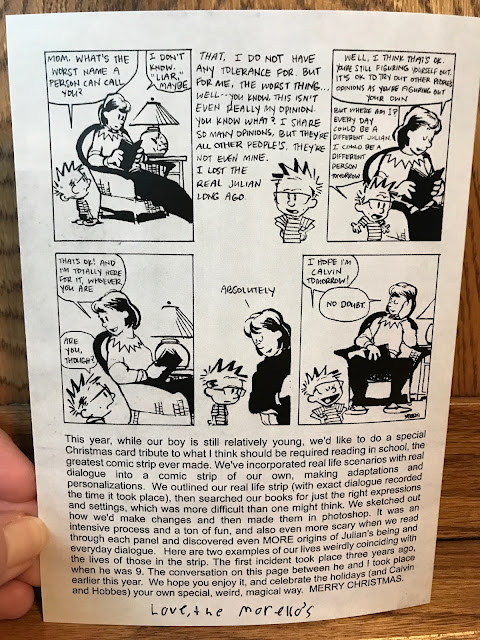 This card was CRAZY.  We had to search and search for the right expressions. Often they sort of worked but not exactly. And we tried to edit them to look more like us. I made the edits and Sean replicated them on the photoshop. But he did it better, like Calvin's glasses. So good.  Added dimples. Elongated the dad's face, made the mom smile once in a while.  The one on the back was easier than the inside strip.  We found exactly the right expressions. Julian/Calvin is too easy. Every expression Julian makes Calvin makes.  I would mark all the spots in the books with a million bookmarks, Sean would scan them,  create new blank panels, and I'd tell him to rearrange them in a different order. I wrote in the words, he scanned again. We had to figure out how to arrange the text so it made sense. Like, "he's speaking first so his words should be at the top and then we can work the others in under that." I have such a new respect for cartoonists. Even more than before. It was buh-nanas.

What a weird project.  I loved it. And as we scoured the books looking for the right faces/situations, as mentioned in the message, it became even more evident just how much Julian's absorbed this fictional character into his being.  It felt like every other phrase uttered we had heard him say in real life at some point.

And with that, a heartfelt merry weird one to you and all of yours.  Big hugs.
Posted by )en at 4:20 PM

I love this so much. I love the little tweaks to make the characters look more like you guys, but I love that it's still pretty much Calvin and Hobbes. Julian really does seem to capture something quintessentially Calvin in his musings and it's delightful.

I was also an HUGE FAN and had all the C&H books (the pretty in color ones, even when Bill Watterson published in black and white) and practically went into mourning when Watterson retired. I think there was a period of time when I was irritated with others who loved C&H because NO ONE could be as big a fan as I was and maybe I wanted to feel unique for connecting in such a huge way to this. At some point I matured enough to just be happy that everyone else valued something so wonderful, too, rather than wanting it all for myself. And I realized that obviously I couldn't be the only person in the world who appreciated something when it was such a huge phenomenon.

All this to say: I think you might even be a bigger fan than I am! And that just makes me so happy!

I love this. I think we all feel the same way. It’s one of those “if you know, you know” things. C&H is so deeply personal and we all feel like Bill Watterson’s our best friend. It’s an unrequited friendship. But we’ll take it, because we know genius when we see it. 🖤