There once was a cat who came to us at Christmastime, a kitty cat Christmas present, in a carrier on a pillow, under the Christmas tree.  He was tiny and peppered stripey grey and a little feisty ball of fierceness.  From the get-go, he would charge through the house, darting from one corner to the opposite corner, to where we sat, where he would tap our foreheads to exert his dominance (as if it were ever in question), and in a flash, be gone again. He bit and he scratched and then he slept and nuzzled and purred and curled up in your lap, head on your knee.  He grew up big and found where you were and stayed there, needing to be near.  He remained ferocious and wild and knew one day he would be the tiger he was destined to be.

When the new cat was introduced, tensions ran high.  Who is this new lesser creature? He always wanted to know.  In time, he would grow accustomed to the new cat and exert his dominance over her as well (as if it were ever in question).  They'd fight and he'd bite and then they'd snuggle and sleep.  An anxious thing, she was always on high alert for the gray tiger, both intrigued by him and fearful of him. Playing with him but never knowing herself where the line was between play fighting and real fighting.

The big gray cat grew into an expert hunter.  We'd never know what surprise would be awaiting us at any given moment, like the day when Julian and I were busy with a piano practice and we heard a fluttering of wings behind us in the house, turning our heads in time to see the kill bite administered and the newly dead bird discarded on the carpet.  This cat promised us with adventures and horrors. Dead birds, dead mice, live mic, mice dangling out of his mouth as a casual snack brought into the house. Parasites from eating who-knows-what in the wild of the nighttime.

This cat loved to hunt at night, when his wildometer hit maximum level. Several times he came home in the morning with some unfortunate and mysterious injury having befallen him.  After a couple of vet visits, we realized we were dummies and if we wanted these misfortunes to stop, we'd have to keep him in.  We did our very best to never let him out at night, to give him exercise by other means (often at the sacrifice of the second, anxious cat).  We tried to take him for walks on a leash. We tried tethering him to the yard.  He learned that if he pulled the leash on the tether taught, he could worm his way out of it and go find a nice dirt pile to roll around in, then come home and ask what was for breakfast/lunch/dinner/second/breakfast/elevensies/supper/snack.  I got so that I kept the pet wipes out so I could wipe him down before he soiled anything. Several times in a day.

And then came a day earlier this summer when neighbors complained of a "chicken thief" on the neighborhood Facebook page.  Also possibly some missing gerbils. And that we should all watch out for this chicken thief. Sean and I looked at each other and then down at who we were sure was said chicken thief as he had slipped out of our house the previous night in spite of our efforts.  Feeling the guilt, we didn't know what to do. Do we try to give him away? Put up an ad on the pet classifieds? Would anyone want this wild beast? We weren't sure.  But later on that day, when he casually strolled in and dropped something on the floor, I knew we had to do something. "Thaaaat's an organ," I said in my accustomed horror.  "That's a body part. That used to be in something alive."  Repulsed and envisioning him with a secret stash of his latest kill somewhere where he could come and go at his leisure, with the disgusting evidence lain before us like it was a cat toy he'd gotten bored with, the decision was made.

We made an ad with the headline "Expert mouser who's also good with people," took some pictures of the kitty cat tiger, and didn't imagine we'd get any takers.   Except we did, the next day. A family in the town next to us, with a large fenced-in yard and small children and a LOT of voles.  And so we scrambled together his favorite bed and snacks (they did not want the leash) and hugged him, took some pictures, and said our goodbyes and just like that, he was gone, out of our home to another. Kitty re-homed.  Julian and I couldn't be there, so, letting Sean handle it,  we hid in our bedrooms until it was over.

When he was gone, I initially felt ok about it. I felt relieved.  The next day is when it really hit me.  The shock was acute, as I woke up and went to go about my daily cat rituals, so many aspects of my daily life surrounding this cat. Unlock the cat door, feed cats, groom, let outside to pee in the neighbor's garden and roll in the dirt.  And I had to remember he was gone so many times, over and over.  It was hard, and I missed him, that lovable beast.  It took me 3 days to where I didn't cry at some point in the day, and Julian, a full week at least with many tear-filled nights.   We watched the other cat look out for him, expecting him to show at any moment. Every day. Until she slowly forgot, and chilled out, her world no longer dominated by the king, no longer someone's prey.

We grieved his absence and it was a somber time and I felt a lot of guilt about giving him away, which Julian fully brought to my attention repeatedly, in wails. But I knew it was the right thing to do.  The new family said we could visit him any time we wanted and I seriously considered it, or at least texting to check on him, but, fearing they were experiencing their own horrors, decided I'd be better off ignorant of his new life, which I now envision for myself to be good, happy, with wider open spaces and where killing rodents is welcome.

The world we live in was too small for him, the call of the wild too loud. We are grateful for the time we had with him.  Be free now, Pepper Kat, and be loved. 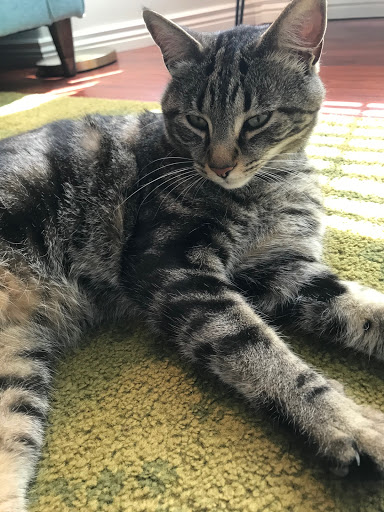 It took me about halfway through this post before I realized that you were writing in the past tense and I began to get very nervous about why that was. (Yes, I realize that this makes me a complete failure as an English major!) I'm so sorry that you couldn't keep your kitty, but I'm also very relieved that he is alive and well and hopefully continuing to slay things left and right somewhere not too far from you.

Cats are such killers. It's insane. THEY are insane. So why does that make it so hard not to love them???

Because they are killers one minute and then fuzzy adorable cuddle boos the next! And so funny. Thanks for the hugs. :) we are doing ok now and hopefully he’s forgiven us by now.