This summer, we didn't do much. In a different letter to a different friend, I shared a few things we had done or places we had gone and said something like, "but I think this summer, the real hero was our back patio. We spent so much time there. We'd read books there, do puzzles. Eat dinner. Sit and talk about life, ideas, and Minecraft.  Turn on the fire if it wasn't too hot out.  Get reacquainted with the stars. We've slept out, gathered with friends, meditated with the cat, watched the pinwheels and windcatchers and listened to the little sounds of chiming fish."  I've loved that patio and adding the pavers in a 10x10 square of space in spring has made all the difference. 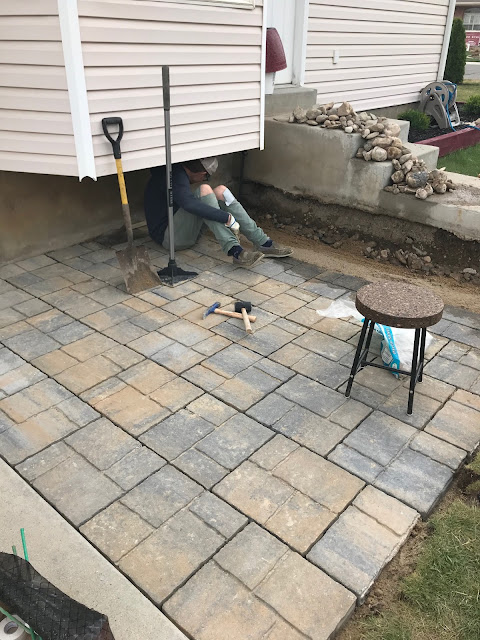 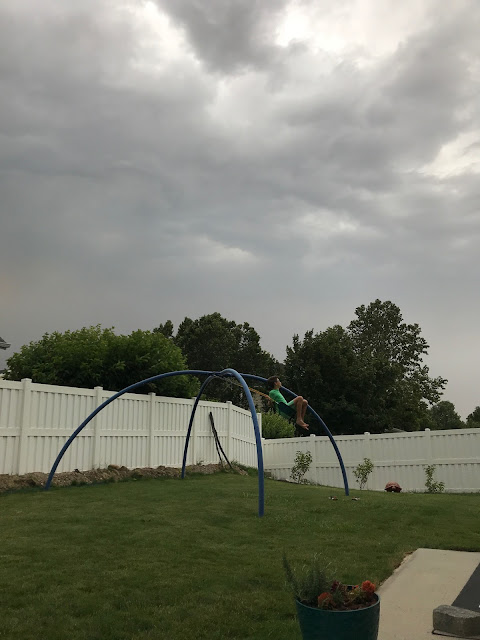 I needed to get out, though.  Desperate for it.  And really, really hot.  So we found a house with a pool about 25 minutes away on VRBO and booked it.  It was soooo good. The house was huge and the owners who normally live there on the upper floors were away that weekend so it was just us and their enormous white fluffy dog-yeti, chickens who ranged freely, and a trio of ducks that made me laugh every time they waddled by in their gang. We ordered dinner from restaurants that didn't delivery to our house.  We swam with friends and swam alone and having that pool was EVERYTHING.  On the last bit of the last day it was the three of us and Julian, nervous about the deep water, only ever kept to the shallow side the whole time. I said to him, "Julian, let's learn to tread water. Let's do the deep end before we go."  He refused.  Did not want to do it. He said he already knew how to swim. I told him it doesn't matter unless he can do it in deep water. That's the point. That's the goal.  I worked on him.  "Come on! Then you can jump off the diving board! It is so fun! You'll love it! Plus, this is the only chance we'll have access to a pool like this, with no other kids."  He was terrified.  But deep down, he did want to do it.  He knew we didn't have much time there left. But he was certain he couldn't. Ever.  This is how he is.  And maybe how I used to be.

I thought I was sort of a "throw 'em in the deep end" kind of person but i have inklings of memories of feeling serious trepidation with things as a child.   I was super bold with some things and much less so with others.  But we decided to let him guide the process.  Whatever he was comfortable with, we'd start there.  He shot down all of my suggestions and in the end, these were the steps he took to get from not getting near the deep water to running and taking a flying leap off the diving board:

1. Hanging on to the edge in the deep end. Crying. Moaning.  Dooming the whole prospect.  Being filled with terror. Sean swimming in the water near him, offering encouraging words.  Julian wanted to touch the bottom to know how far away it was, for some reason. This would be reassuring to him. But he could never get to it. Because he's so buoyant, something else he never believed.  "I will sink straight to the bottom and drown."

2. Letting go for a second and trying to tread water.

After many minutes of this, I suggested jumping off the side of the pool into the deep water.  He said no. I offered my hand to hold.  He said ok.

3. Holding hands, we jumped in together.

4. Holding hands, we jumped in together and this time I let my hand go slack. It was up to him to kick to the surface (but still holding hands).

5. Jumping in holding hands, letting go when we got in the water.

6. Jumping in together, not holding hands.

By this time he was realizing he'd rather swim to the edge than stay afloat treading all day.  So he started doing that.  Sean was near him the whole time.

7. He started treading in the middle of the pool with Sean.  Then he'd start to swim to the edge.

8. Then he started swimming from side to side, demanding that Sean be near him the whole time, which he was. Never leaving his side, but never taking him when he called out for help. He was so close to the edge every time he called out.  We let him find it himself which gave him the courage to push himself a little further.

Finally he was ready to jump off the diving board.

9. He walked to the edge and jumped off.

10. He surfaced, desperate for help, for someone to save him. We told him, "you can do it! Just start swimming! Go!"

And he did.  Kicking and splashing and making it, just barely, to the edge.

11. When he saw he could do it, he had no fear.  He loved the diving board. He went off so many times after that, I could never count.  He began to swim from the deep water to the shallow end of the pool. Pushing himself further and further until there were no more challenges.

We were so completely thrilled for him, this kid who has a lot of anxiety about facing difficult things. He negatively self-talks constantly, he carries a lot of fear.  I have had to revisit the way I respond to this many times over the years. I'd go from being encouraging to agreeing with him because i was tired of trying to convince him of something that ultimately he had to decide for himself.  I was never going to be the one to do it.  But I could hold his hand if he needed it. That was something I could do. I told Sean, "This is the kind of rewarding feeling about parenting that people talk so much about!"  It was euphoric.  So many struggles in his short lifetime.  And so few of them celebrated.  This felt so great and I marveled at all the tiny steps that got him there.  It didn't matter how many steps it took or how broken up the process was. He decided what he wanted to try. Sometimes he'd take our suggestions and sometimes not.  I pressed many times early on, "how about we try the board now?"  and he'd say "no" every time.

Watching him get himself there was amazing.  And it reminded me that we can do so many things if we break it down and do it our own way, maybe taking eleven steps, and that's ok.   What a lesson.  I love this kid so much.  I watched him turn eleven today and we walked together on the first day of school, a day that is generally not his favorite but one he was willing to face, under unusual and unsettling circumstances.  It's so lovely to know that we have this pool experience in our arsenal of encouragement.  "Remember doing the diving board for the first time? Remember how you can swim now and you thought you never would?"  He cannot deny that he achieved something big that day. And any time that happens, man, I am here for it.

Happy birthday, you tall lanky squirt, you. And thanks for teaching me important lessons. 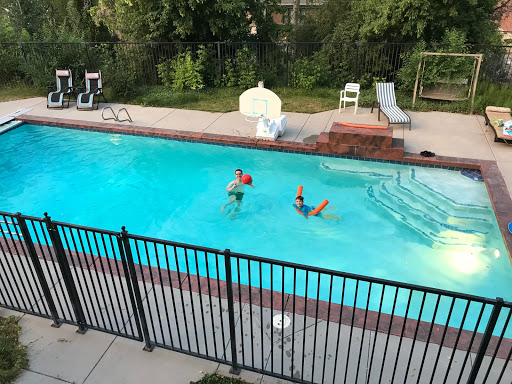 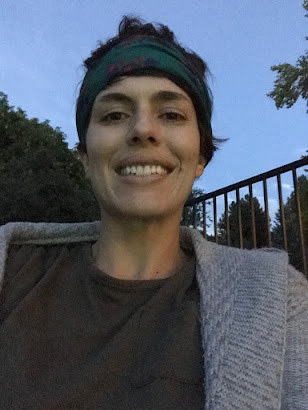 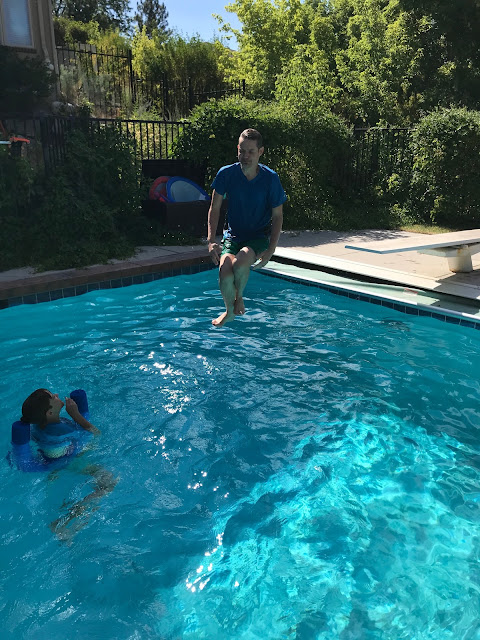 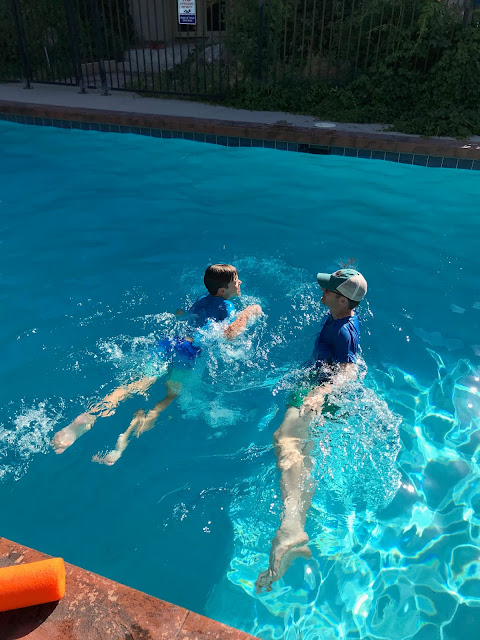 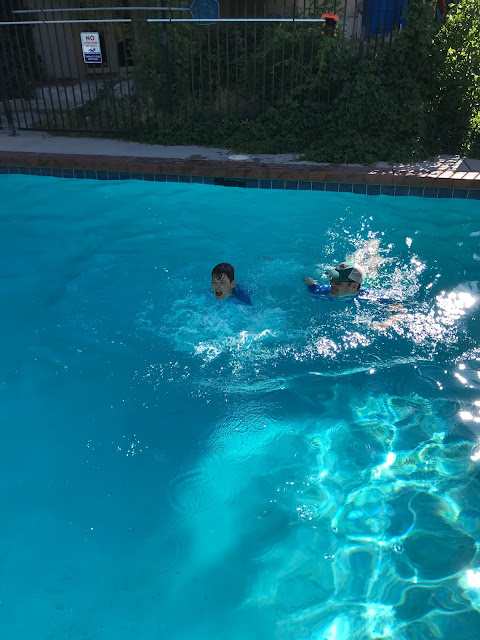 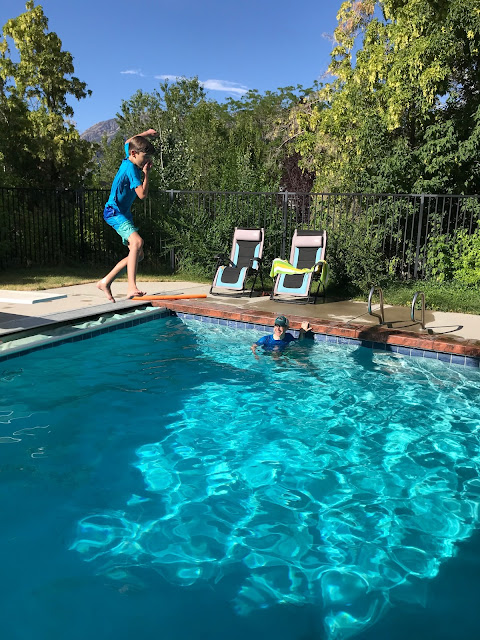 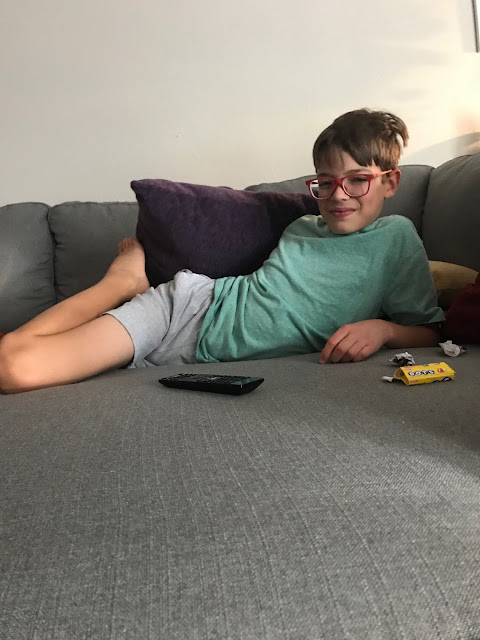 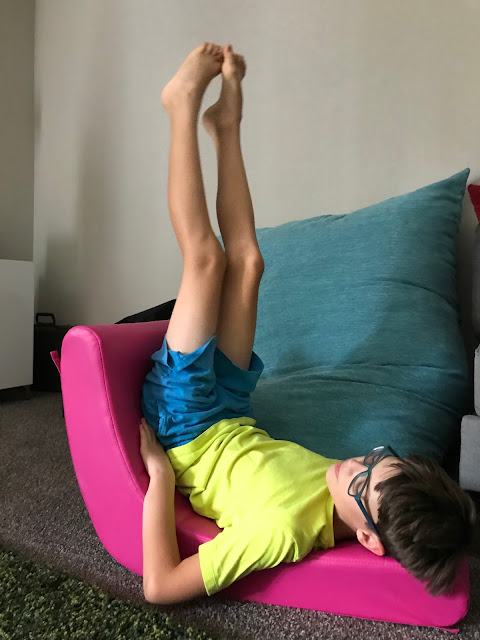 Jen! I LOVE the story of Julian jumping off the diving board! And especially your commentary about it. It is SO true! It's so easy to think we have to master things quickly or on the first try or else it somehow doesn't count. Thank you for the reminder that those tiny steps add up, and the size of the steps isn't nearly as important as the direction in which they take us.