The Trees If You Please

My main goal in my life right now is to just enjoy it.  This year has been a big one for me and I've experienced a lot of growth.  It makes sense. Things should always be changing.  But many things were not so fun or easy so that when things are good, I really seize them and squeeze them and hold them as long as I can. And that's what I'm doing now.  Julian is at such a magical age. He's gone through some hardship of his own which he's learned from and has helped him develop into just the most amazing kid. I admire him so much.   It's so fun to have a kid who now has memories.  The traditions we intentionally or unintentionally created now mean something. They are extra important.  He can reminisce. The memories are now his.  I contemplate this with wonder.

But this post is about trees, so let's talk about that.

We have a Christmas tree in the basement. It's white and full of flocking and really pretty. But this year we were like, we haven't had a real one in a few years. Let's go get one. So that's what we did.  First, we stumbled on a tree-lighting at a park nearby.  It was very pretty, very low key and the actual lighting was kind of anti-climactic because City Mayor was like, "so.. i guess.. here you go" which left me and Sean to critique just a little:  "Maybe a countdown? Just from 5?"   It made for some good jokes.

Santa arrived on a fire truck and I teased Julian about it because he hates Santa.  Not the idea of him. In fact, guys, i think he may still believe a little bit.  It's like he knows the truth but also still believes.  It's kind of the best.  Why should the magic ever die? Why can't you have both? Why can't they both be just as true and real as the other?  I say.  But he vehemently rejects the idea of sitting on some stranger's lap. But I screamed and waved at Santa Buddy the Elf-style as he came driving down, super embarrassing Julian. 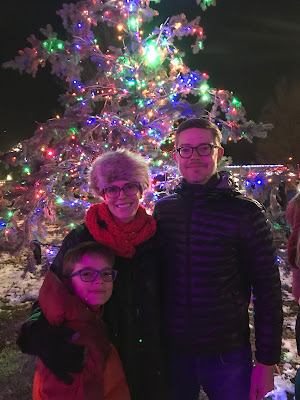 Then we drove to a nearby tree lot and it was all lit up with fun lights and everyone was so friendly and down-homey (not sure that's a phrase) and we thought of the years of walking to a tree lot with our cart in Bklyn. How it was different but the same. 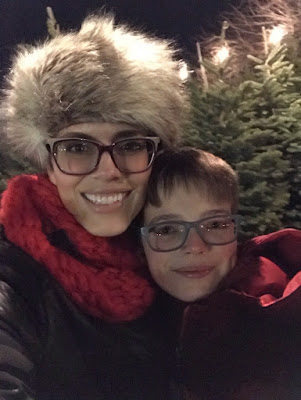 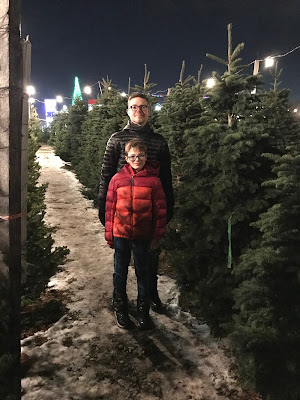 We let Julian pick the tree and he took this task dead seriously. Turns out it was the right call because he chose one that was pretty perfect.

How many more times can we do the official placing of the tree topper like this? A million more, I hope. I'm sure Sean has it in him. 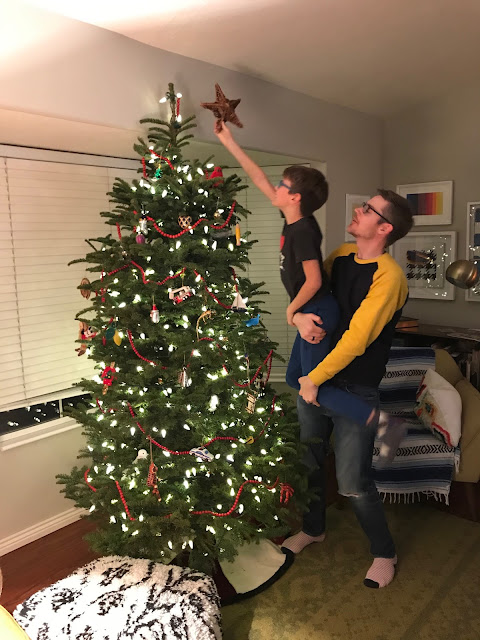 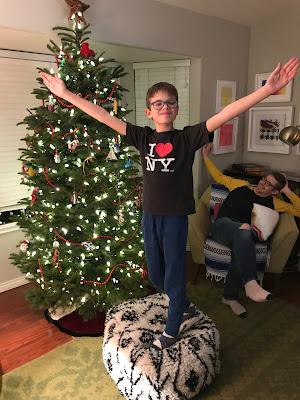 Lastly, some cat pics.  Because I love them so.  Marshmallow has many names and one of them is Cinnamon Roll, because she sometimes sit so tightly curled up, it's clear that's what she is.
She is a skittish little thing. Yesterday I sat with her a good long while until she could relax.  She hates being picked up but will tolerate it for a few seconds. In spite of her terror, none of us can resist it. She is the softest fluff and her tummy is as white as the pure driven snow.   What she loves is for you to sit very still so she can climb up on your lap. But if you move at all, she's out of there.  Slowly I am working on helping her chill out and trust.  It's a process, right?  She's the best. 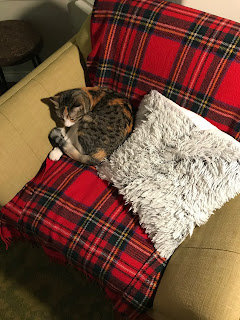 This cat really knows how to sleep. I'm jealous of him every time I watch him do it. 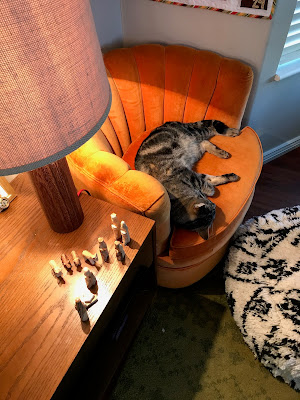