Once again, my fave thing to do is stroll the halls of the elementary school and look at all the artwork and then snap some pics and put my face on the "watch list" in the office.  But I can't help it, they're too good!

Here Julian's class (at least i was taking pics of my own kid's class... this time) made pictures of themselves sticking their tongues out catching snowflakes. It's a good lesson on perspective, kind of like that one I had drawing train tracks and sidewalks so very many years ago.

Here are a few I liked: 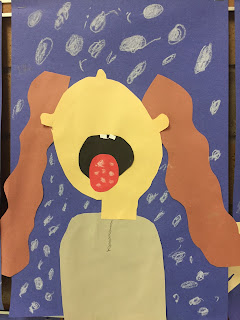 This next one tells us why you need to put a nose because this subtlety makes me think his eyes got taken off. 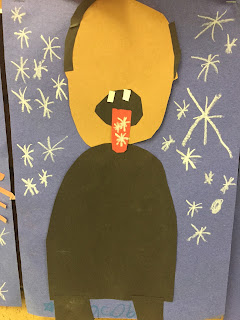 I liked the cool Lincoln beard on this one. Or Amish beard? Really what's the difference. 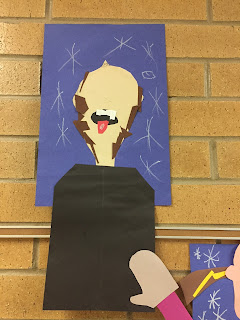 And then I found Julian's and was like, yup.  That's a skeleton.
He made himself with an exposed vertebrae. 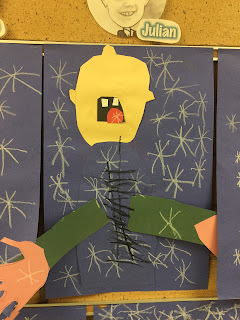 But then later when I told him I saw it and asked him about it he said it was a zipper. I said, "but your jacket completely blends in with the background. I mean, it has snowflakes on it and everything. I thought it was vertebrae or something."  He laughed and liked this a lot so maybe he'll just switch his answer.  Merry Christmas! I'll try to take more pics the next time I go. Gotta get 'em while I'm still allowed in.
Posted by )en at 6:32 PM

For the second one, I’m seeing a vampire with mutton chops... just me?

Third one I mean

A vampire with mutton chops- that's exactly what it is. 😀

I concur. It's clearly some robust sideburns.