I had a lengthy boring blog post up earlier until I realized it was International Pancake Day and was like, forget that! *revert to draft* This is WAY more important.

First, I don't care for made up holidays.  I mean, i generally don't do much about them. Even Doughnut Day, and I love doughnuts.  I'm not going to rush out and get one to celebrate. (Probably because I got one yesterday, just for because.)  And I may not even necessarily have pancakes today (had them last night) but I had to come and talk about them because, just last night as we were making them, I made declaration after emotional declaration of how much I looooove pancakes.

Here's a dialogue Sean and I shared just yesterday:

JEN: Ohhhh i love pancakes. I love them so much. I prefer them a thousand million times over waffles.

SEAN: Waffles are just confusing. I can't understand them.

SEAN: They are a variant of pancakes but in mostly negative ways. I guess it's a bit crustier right out of the waffle iron and that can be nice, but seconds later and it's soft and soggy. And I just don't need a hundred pools of syrup...

JEN: Right. Every time I have syrup with waffles i end up mashing down all the little squares, thus making it into....


As you know, I am a proficient chef and have my own personal style and flavor of cooking.  I particularly enjoy making breakfast and even have a wide repertoire.  Nothing fancy, but I know how to do it and I've honed certain recipes.  Julian's favorite breakfast? The puffy pancake, or German pancake.  It's fun, I like it and i have learned i prefer it to be a bit on the thick side.  I try variations like putting it in ramekins so it shoots sky high with a long arrow tunnel in the middle, perfect holding place of  a pool of syrup or applesauce. I usually make these on Friday or the weekend.

But MY favorite pancake? Just your basic pancake.  And since I aspire this to be a food blog, I will even share my recipe with you! But before I do, let me tell you about my trip to London I took one year. The fall was brisk, and the jacket I wore was an off white that stood starkly contrasted to the colors of....     EHHHH{buzzer sound} NO.  That is a JOKE and ever will be.  Here's the recipe in the cookbook from which mine derives: 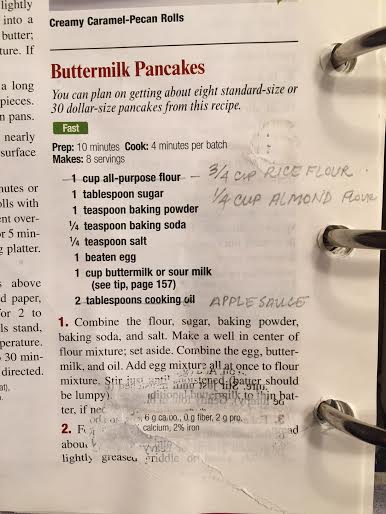 But lately here's what I've been doing:


Sometimes I do mostly applesauce and just top it off with oil, which makes it oh so nice.


Nothing makes me happier than standing in the kitchen, eating the pancakes as I go. Hot hot off the pan. No plates for me.  Slap on a dollop of applesauce, fold it in half like a taco and EN-JOY.

And it just so happens I have a captured moment of my bliss: 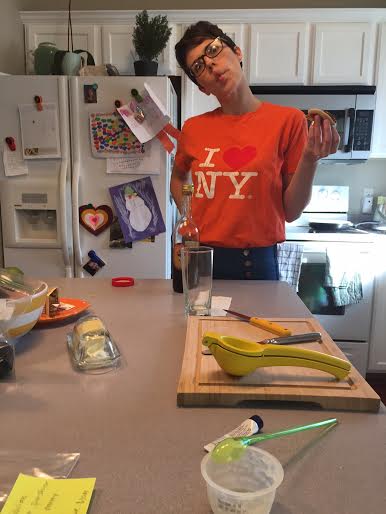