Our Christmas Corner is Cozy City right now.   I'm loving it.  All i want to do in my life is sit at the couch and read Christmas stories while listening to Christmas music.  Maybe play a game if I can get anyone to play.  Julian busted out the chess board the other day and boastfully exclaimed how goood he was at chess and how he wins every time.  I said, "not so fast."  He did win the last time (and first time he's ever played) but that's because I helped him too well and, as we know, I always lose when I play against myself.    I was helping him along, helping him along, until I paused and said "Sean, could you help him? I feel compromised and conflicted."

Which he did, but then I continued to give tips and then, at the very end when it got very intense and exciting, they went for it and got me.  I then went on to explain, "See what happens when you play to win, Sean?"  He loves it.   So Julian continues to think he's a chess master and maybe he's right. Other Jen is a really good teacher.

The Christmas music is on basically 18 hours a day.  I go to bed singing the songs and wake up singing them too.  Normally this makes me batty and it still kind of does, but in a festive, jolly kind of way. How could you be unhappy if you woke up singing the Ronettes' Sleigh Ride? (ringalingalingalinga ding dong ding!) Later that same chess evening Sean and I were lazing in front of the tree talking about this and that and, as usual, our conversation went to Christmas music.  I've mentioned before that I'm not a big fan of contemporary Christmas. I'm more oldies and Mannheim Steamroller.  Maybe a little Sufjan Stevens. Also i added Ray Charles Christmas to my Pandora and it is fab.  Somehow, no matter what station is on, Groban and Buble keep popping up no matter what I do.  Tenacious pair, they are.  And the conversation went as follows:

SEAN: Josh Groban just does not appeal to me intellectually.

SEAN: I do not like his voice. So I don't understand why the rest of the world does.

SEAN: Yet so many people love him.

JEN: I can't explain it and never will.  He came on the other day and I went into such an immediate blind rage, i snatched my phone and, in my haste and fury to shut him down, fumbled with it in my hands like a hot potato.  Couldn't do it fast enough.


And with that, the coziest picture if Christmas Corner and  of Julian waiting for me to come down and read him a Titanic book, which has experienced a bit of a resurgence, I'm happy to say.  God bless us, everyone! 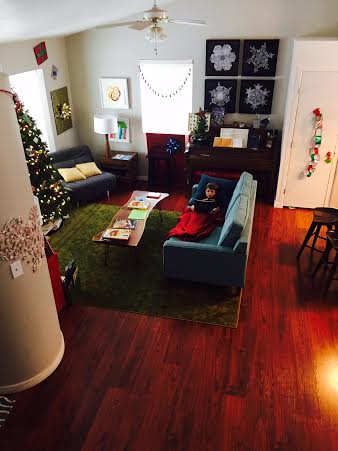