so much depends
upon

sitting side by side

through rain and rust
and

so many piles of dirt. 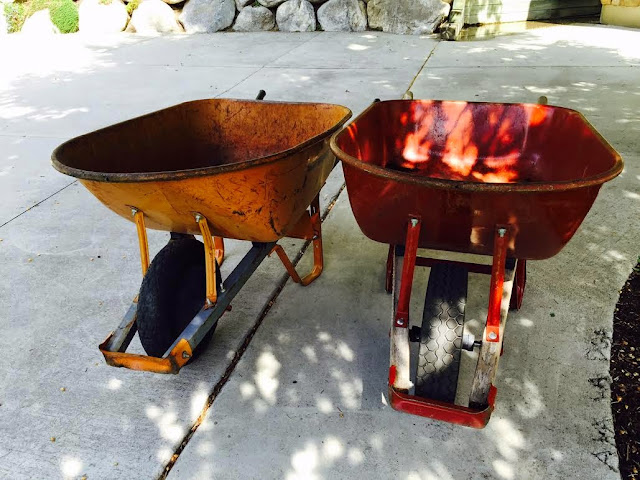 When I was in 10th grade I took honors english. I struggled with it, mostly because I kind of disliked my teacher a lot. I mean, I'm sure she was real nice but for some reason I was bothered. It could have also merely been that I was fifteen. But I read a heckuva lot of books, some I enjoyed (Farenheit 451) and some I did not (Scarlett Letter--burn, Scarlett Letter, burn! Burn at farenheit 451!)

I also struggled with a lot of the poetry. I feel like I enjoy poetry. I mean I even write some myself. I began writing poetry at quite a young age. I still have an old book of poems I wrote in as a child that I'm quite proud of. But for some reason a lot of the poems we were forced to explicate rubbed me all kinds of wrong ways (I'm looking at you, Emily Dickenson). Again, i blame my teacher.

One of those poems was William Carlos Williams'  The Red Wheelbarrow.  I thought it was so idiotic i wanted to die.  It was kind of my poetry pet peeve for several years after, even. Pet poetry peeve?  And then I grew up and forgot about it. And then recently I saw these wheelbarrows at my neighbor's house, sitting together so adorably like an old married couple and stole a pic.   And of course I was reminded of this poem that really never left me, and I realized, sort of suddenly, that i like it now. That it might just be my kind of poem! I don't enjoy being forced to dig and discover the true meaning of a poem but rather just mull it over in my mind naturally. Rely on my gut to tell me if I like it rather than what it allegedly is meant to mean.  And now, giving it a second chance after many, many years, I like it. It's fun. It could be silly. But also perhaps poignant and resonant. I believe I have made a poetic full circle on this. And it only took twenty years. It feels strange, but good. Happy closure.  Emily, you may be next.  (I said may be)