Hey guess what? It's February! So much happens in February!  If by so much I mean, not much.. at all. But it doesn't mean I don't have some thoughts.  Read on!

1. February 2nd came and went.  After I went on and on last year about my immense love of the movie Groundhog Day, my brilliant sister brilliantly suggested the best way to celebrate it which would be to live (read: eat) like the day is your last. Like there are no consequences. Like Phil does one day in the diner and orders every pastry and dessert and every gross/good thing.  YES!  Isn't that amazing? Too bad I didn't get this post up until after the fact. Too bad i forgot about it ON the actual holiday until it was too late. Well guess what? The really great thing about this arbitrary, meaningless great holiday is you can celebrate it anytime you want to.  So there's still time! Go ahead, go stuff your face with your favorite  gross thing and have no regrets whatsoever.

2. On that note, imagine if the Super Bowl was on Groundhog Day. What kind of cataclysmic catastrophe would THAT be like?? Oh WAIT.  It happened.  I have nothing really to say about this because I do not watch the Super Bowl in my house, or football on television of any kind.   Super Bowl parties, I will concede, can be fun. As long as I don't watch the game and if there's plenty of food.

3. Over Christmas I had an epiphany. I went snowshoeing in the mountains and it felt like the best thing I could ever do.  And I realized: Snow is beautiful! Snow doesn't exist just to make my life hard! It had been too long since I last knew that.  As everywhere else in the winter world, we've gotten some decent amount of snow.  We had a doozy of a storm and then the temp dropped to the teens which was kind of the worst? in a way?  Because it froze all the dirty slush and dirty ice residue that covered everything in town, kind of like the pink spot in Cat in the Hat.  But then it snowed a wet beautiful sticky snow and the other day I picked up Julian from preschool with the sled and then we walked over to Prospect Park for a snowy adventure, or "raventure" as the squirt says.  My, I am not sure i've seen such a beautiful sight.  And, as mentioned, normally loathe of snow, I found a way to love it, and since my soul hungers for nature, I felt very remedied indeed.

It was a blizzard day. Heavy, constant, quiet snow.
Magical snow.
Better go walk in the park with a sled snow. 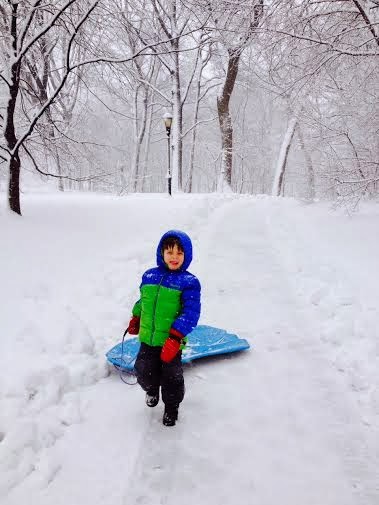 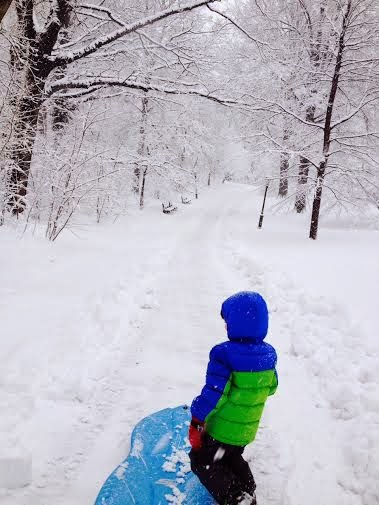 We went that same way the next day for sledding part II.  Oh man there are so many ways to sled in Prospect Park. 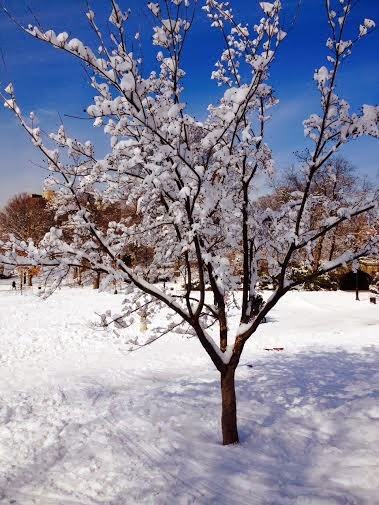 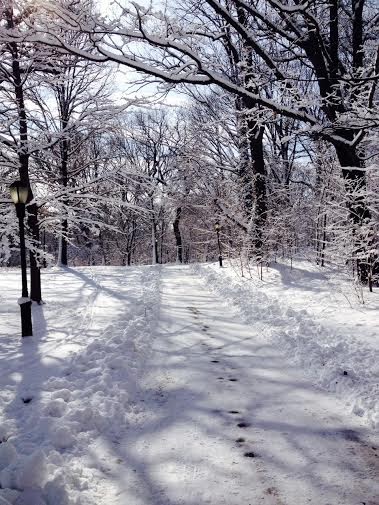 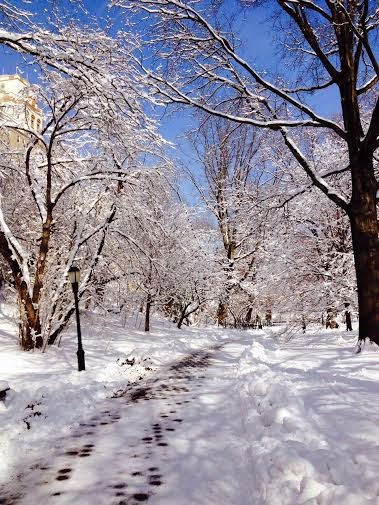 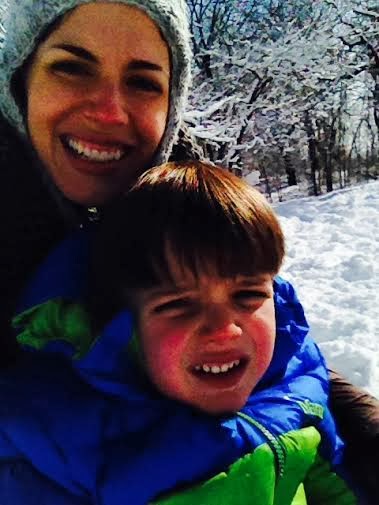 Doesn't everyone have a sledding pic with their mom? I know I do, somewhere.

Here we are ice skating: 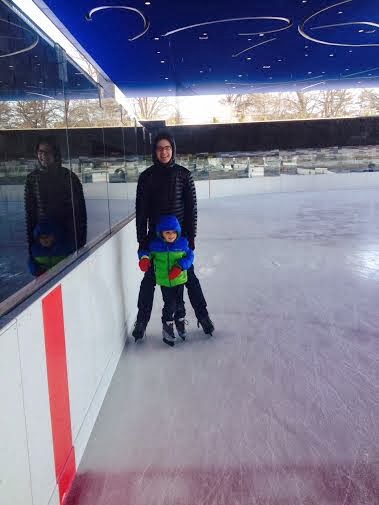 Here I am making a much more graceful/professional ice skating pose in my mind than in real life: 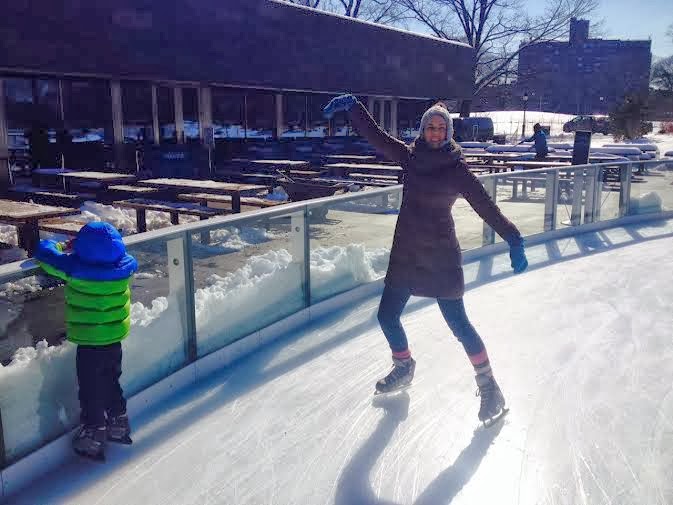 4.  I was standing in the kitchen doing something boring. Julian, on the other hand, was playing with a cookie sheet full of flour and had his cars in it.  He turned to me and said pointedly,


"Mom, did you know my cars are my kids?"
Me, laughing: Yes, actually. I did know that. and it's adorable.

Julian, dead serious: It's NOT adorable. I'm a mommy to them.


Ha ha! Pretty cute. I mean, NOT cute.  Serious.  For real.  And frankly I'm glad he takes his job so seriously. He is an example to me.

5. A couple of weeks ago I tried dim sum for the first time in my life. SO FUN.  Dim sum was one of those things that you hear about but never really know what it is and you keep hearing about it, not fully interested, but one day you have to say, "ok, time out. What IS dim sum?"   And it was so much more than I expected.  Sitting down at a restaurant and eating immediately, no menu? YES.    Having people constantly roll carts to your table and you pick and choose what dumpling o' mystery or soup or dish you'd like? YES.  Having them cut it with scissors to share with your table? YES.   So fun!  Try it today. It's such a fun dining experience.  We went to the Golden Unicorn in Chinatown.  Mindy Kaling mentions this place on The Mindy Project but unfortunately we didn't see her there. 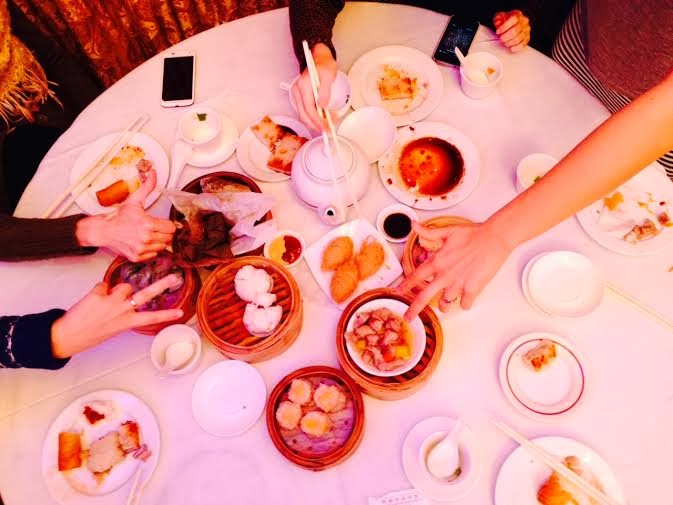 6.  I went on a walk today and the air was cold and the sun was bright. I loved it. I saw some things here. One of those things was a person taking a picture of something. As I walked by I saw it was sort of two conjoined icicles separated by a smooth tube of ice on some leaves. This person was having his own winter walk moment and as I passed i wondered what was more beautiful: seeing something beautiful, or seeing someone see something beautiful?

7.  Lastly, I've recently discovered this and it's brought my heart and house a lot of joy. I hope it does the same for you: