You want to know the BEST way to throw a surprise party for someone?  Just throw them a surprise party with no reason whatsoever!   The other day a friend was having a gathering at her house. I told them in a group text I was coming but a little bit later than the others, so if they wanted to throw me a surprise party, now was their chance.  Well guess what? THEY DID.  It was awesome.  They had balloons and a banner and doughnuts and everything.  Marvelous. I was de-lighted.    Here is a picture I took: 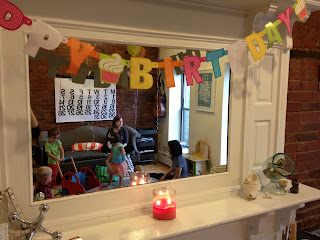 Thanks, pals. When we got home, Julian was so inspired by the surprise party that he wanted to throw one for Sean, so we did.   It went off fantastically.  We made a cake and everything.  We put party hats on ourselves and Julian's stuffed animal friends. We hid behind the couch and almost died from the anticipation, finally jumping up and shouting, "SURPRISE!"  Here is a pic of our decorations: 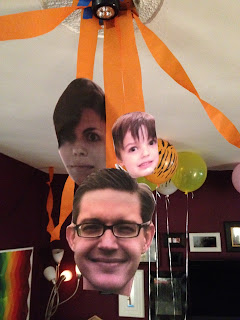 I wonder what I could do with those pictures.   Maybe make them into a mobile? Perhaps for a baby shower for someone?  Endless possibilities.  Happy random surprise party!
Posted by )en at 3:32 PM

Please do this for me. At my home, in Utah. It would be the best surprise EVER!

Yeah, we're awesome. No it was Suzie's idea and we just went along with it.

Yes but you had the Entenmann's. YOU.