Two things Julian had sorely been hoping to visit one day in his life was The Intrepid ship-- sea, air, and space museum, and also the Transit Museum which I kept hearing about but never knew where it was for a very good reason.

First, The Intrepid.  It is located on the midtown west side and we went to the opening day of the space shuttle Enterprise.  Needless to say, we were both excited.  We'd driven past it several times and we'd always look for it and say hello.  It is huge and majestic.  Here are some pics: 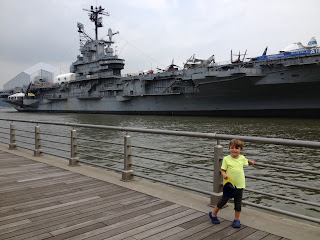 The day was hot with about 300% humidity but with a slight breeze.  That, our excitement to see a space shuttle, and Julian's little spray bottle kept us alive.  He was very patient while we stood in line.  I, on the other hand, was going to body slam the pack of kids breathing on my neck behind us, they were so close.   "Give me some space!" I said. Then I laughed at my own pun. But i was still bugged. When we finally got inside the tent where the Enterprise was housed, we went in and simultaneously gasped. And I'll admit, I got a little teary.  I am what I am. Have you ever had moments when you come face-to-face with a part of you?   It's like finding a clothing of item that speaks to you-- i know this is lame-- and you feel like you're finding a piece of yourself that you didn't know was missing. Seeing the Enterprise was one of those moments. 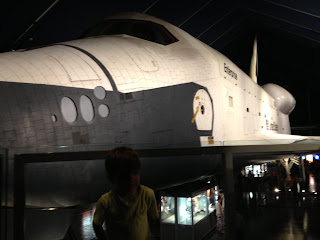 Except I think I kind of knew it had been missing.

I took a few pictures of the planes/'copters on the top deck.  They were totally cool and wacky. 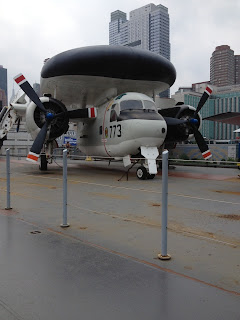 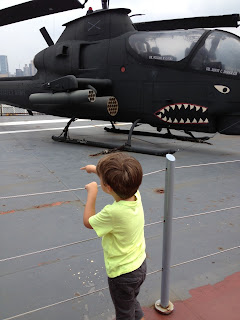 I had been reading a WWII book about some pilots at the time and it felt nice to see some planes up close. I also think I spotted an actual WWII vet, super old, or someone close to, and he walked around slowly and, unless I'm imagining it, emotionally, talking about the things he was seeing to his companion.  I tried to lurk and listen without being too much of a creeper.  How amazing would it be to have a sit-down chat with an actual WWII veteran? Pretty soon they'll all be gone, which makes me very sad, for some reason.  It's kind of like the Titanic survivors, you might say. There are no more, the last one has passed on. [Melvina Dean. She was a baby on board. Died in... '99?]

Speaking of, how much in heaven were we when we got to play on a ship's bridge inside the museum??  Julian and I had the place to ourselves. 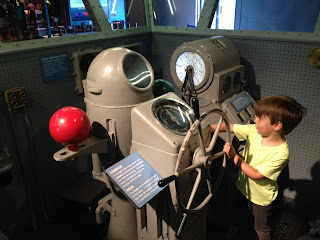 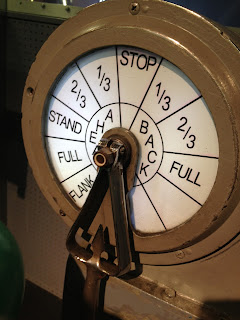 I loved all the old timey stuff.

They had a giant propeller inside. it was huge! So big! Trying to get Julian to snap a pic of me is basically impossible with him dancing and fluttering around, but it makes me feel very ethereal. 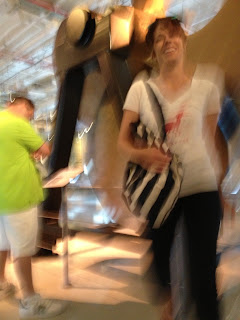 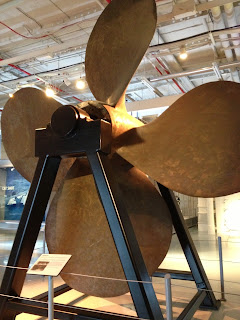 One last pic of the silliest aircraft of all: 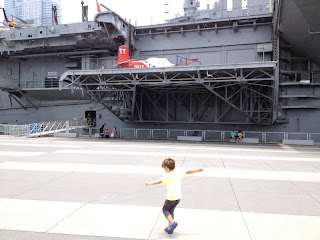 Next was the Transit Museum.  The Transit Museum is in Brooklyn, features the ins and outs of buses and trains, and is located in an actual subway station--hello! Here's the entrance: 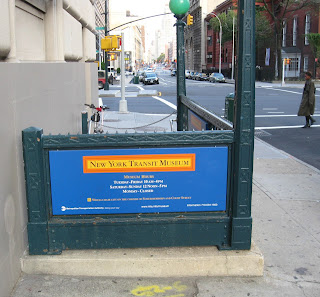 So great. One thing you might measure a true New Yorker by is how they feel about the subway.  I love the subway, for so many reasons.   I think this isn't anything new, but I'll say it again.  I have so many feelings about it. I have said that one way I could handle leaving this city is if i created a subway train car replica inside my house, some place where I could just go and sit (perhaps it could be mechanical and move slightly), think my thoughts, smell some gross smells, be afraid of someone else's pee, stare intently at a subway ad to pretend the hapless panhandler isn't there, like I didn't notice them because of the fascinating ad i was reading.  All in the comfort of my own home.

You also know you're a true NY'er when you reminisce with friends about the subway ads.  Am I right or am I right?

Dr. Z, I miss you.  Does anyone know if these are still around? I'll take that train just for that, even if it's the Z train.  (this is funny because I've NEVER taken the Z train. It's totally obscure to me and my life.  Who rides the Z train?? Subway jokes are hilarious!)


The buses and engines were cool enough: 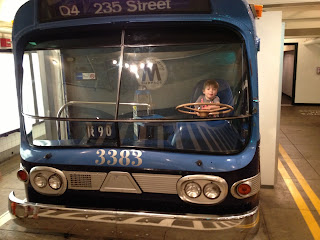 But this place had me at the even UNDER underground level where all trains are kept.  What a magical transit wonderland! Aaaah!

They had trains ranging from the 1907's to the 60's or 70's.  After that I wasn't too interested. But the OLD, ones, the old!   They were just marvelous.  I loved it all.  You could run in and out and on and through them.  My favorites were the extra-olds: 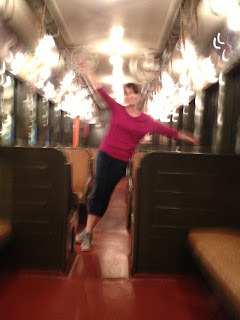 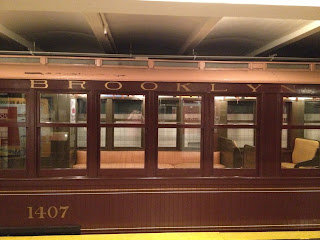 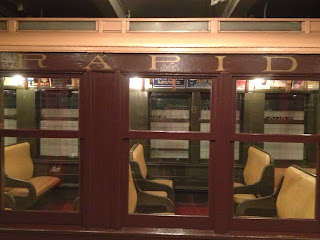 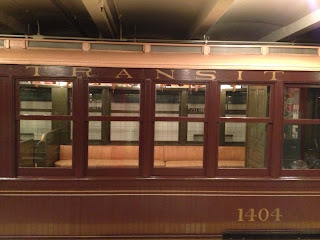 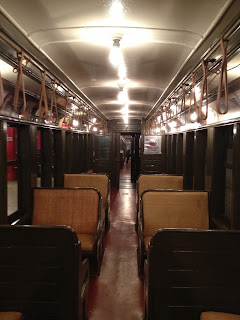 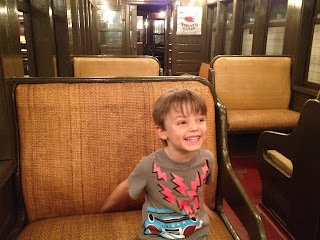 These days I'm kind of in love with this particular early century era.  Wow, these were so fun. And speaking of ads, get a load of these gems: 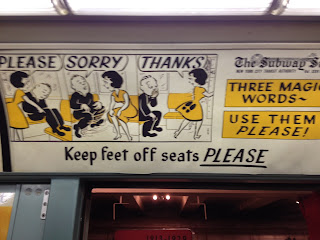 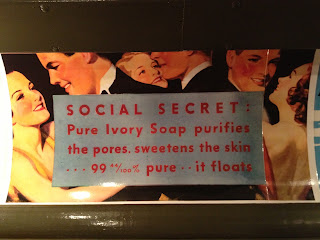 I tried to keep a log of the years certain trains were in use but since I used indicators like "red seats" and "old brown woven," and that this took place months ago,  I'm not too sure how accurate these will be. I'll do my best to match them. Since these are the only pics of red seats I took, it's a pretty safe bet these are in trains from the... 1950's! 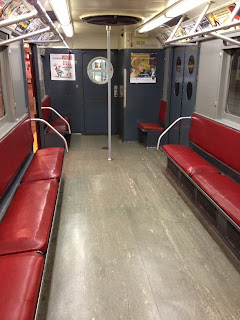 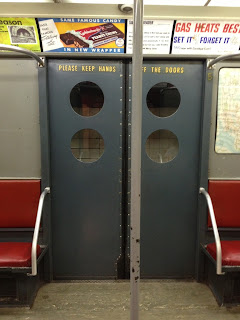 I know you know what I'm talking about: 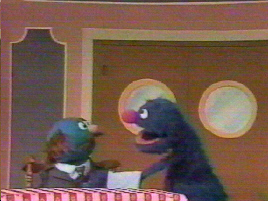 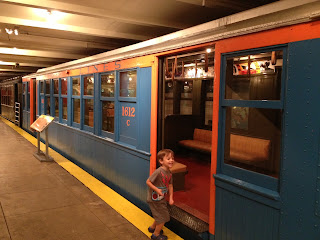 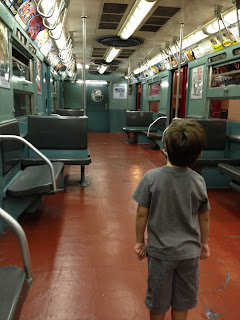 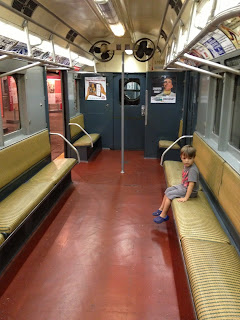 Also, stripe seats??    And, can't get enough of those fans.

Well, on our way out we exited near some turnstiles that were from the 1939 World's Fair, an item on my list of things/places I'll visit when I have a time machine.  They should keep having world's fairs, right? but only to recreate the old ones.  Like ice cream cones, hot dogs, ferris wheels... ok, this just sounds like a regular fair, and a boring one. But they could make it old timey! Why do i want to live in this time period??  Hmm, I'll have to think about it. 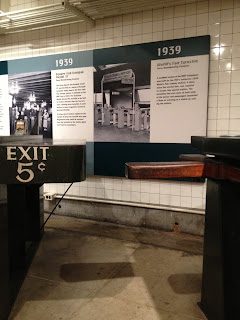