Who loves fairs? I'll make it easy: ME.  A friend of mine was teasing me for being a fair junkie and I was like, what? You're dead right.  I thought about it and asked myself why I love fairs so much. My answers:

1. Fair food.  Fair food is the best food of all the food.  And there's so much of it. Right next to each other. Of varying types.  Maybe I want a gyro one minute and a pulled pork sandwich the next? Or pudding? Or corn on the cob? Or a fuzzy lime?  It's so good. It's just so good.

2. The rides.  Insisting on calling all people who work there "carnies."   Watching Julian brave the rides by himself for the first time.  It's straight up magical.  It's a rite of passage! I've never been so proud.

3.  The throwback feel.  I think one reason why I love it is it is such a stark contrast to my city living.  Where some people think the fair is low brow, UN-classy fun, I think it is magical, exciting and new, even hip.  Because I find sweaters like these for $20 a pop, knowing they could go for much more near where I live.    It's a city mouse visiting the country mouse and marveling at all the oddities and different ways of life.  The farm animals and the smells and the strange people. I love it all!

For Julian's birthday, and as an opportunity to check off a list item, we visited the Fete Paradiso on Governor's Island.  Governor's Island is an island off the southern tip of Manhattan and adjacent to Bklyn.  See it in the map here:

I don't know much about Governor's Island. It has a pretty interesting history but that history is____???  I don't even know.  What I DO know is it is totally a surreal and wonderful place to visit in this metropolis.  You take a boat there, only on the weekends, and it is grassy, with old buildings, sort of compound-like.  You can rent a bike or walk around the old paths and you feel like you're in a different land, a different era.  This year, all summer long every weekend, they held the Fete Paradiso which is an old Parisian fair with early 1900's vintage rides. Arrrgh, so cool!! The rides were just fantastic and they blasted old-sounding French music and it was just amazing.  Talk about being transported.  It felt so much like a different time that I kind of felt silly wearing my modern clothes.  I felt so out of place.    So dreamy.  Here are some pics:


This was this crazy man-powered bike/pedal ride.  There are only two in the world. 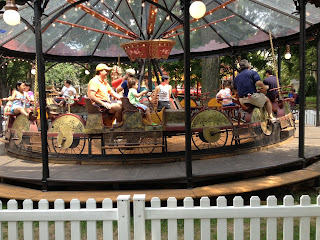 A boat/swing ride.  I got in as well.  It's pretty fun.  I can't believe they found all of these rides. This is one of those things that I just want to thank the genius who thought of this and for putting it together for all of us. 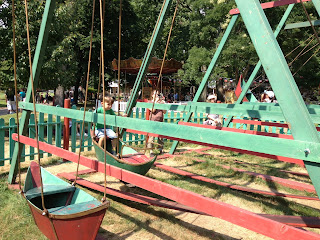 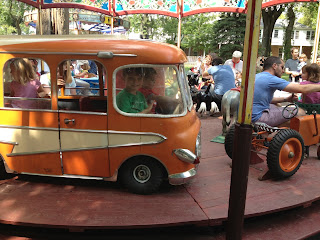 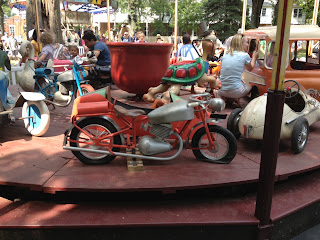 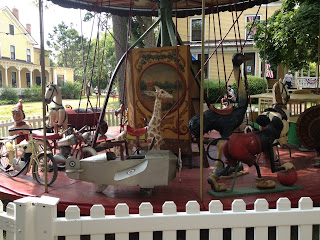 Old old, creepy! scary! (their mouths move up and down and you try to throw a ball inside.) 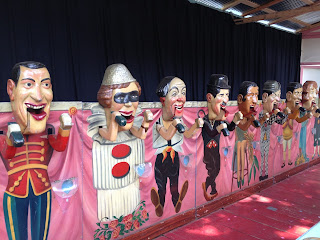 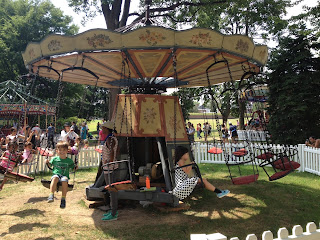 Here is a video of Sean and Julian going backward on the dragon ride to the soundtrack of Amelie.

For the second year in a row, we also visited the New Jersey State Fair.   I love this fair. This fair is nestled in a little bowl of green rolling hills in the gorgeous New Jersey countryside.  When you think of New Jersey, do you think of green countryside?  I might not have, and certainly don't when I think of words like Newark, Elizabeth, etc.  NJ is right across the Hudson from Manhattan. It is gross and unpleasant.  But bust through the city-mess and you come to beautiful country and it's only an hour away.  Here are the pics:

I had two favorite animals at the fair this year.  First, the baby goat.  Tell me you can look at a baby goat and not die a thousand deaths. 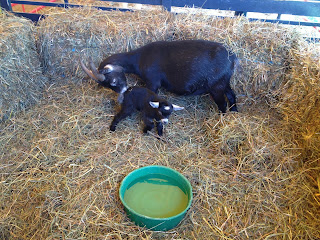 *Fits of sobs then head explodes*

Second, the elephant. Last year I vowed to ride this elephant and this year I carried out that vow.  Julian and I climbed aboard this beautiful creature named Beulah and I instantly fell in love.  I LOVE ELEPHANTS. 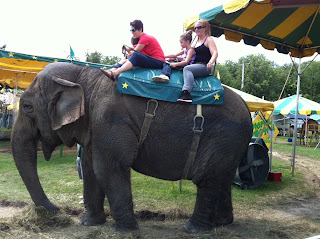 First, their adorable droopy eyes and the way their mouths are turned up so it looks like they're always chuckling.  Look at this face. 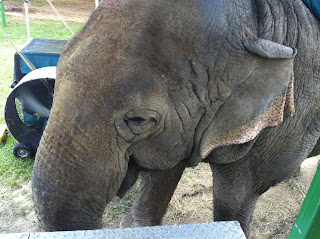 What you are looking at here is sappy Jen getting weepy, petting her beloved dream-pet Beulah. I cried, I totally cried. 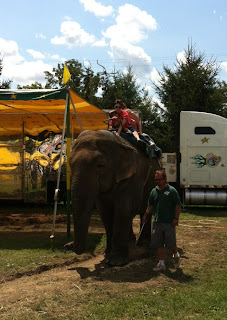 As mentioned, watching Julian ride rides by himself gave me a lot of pride.  This kid is filled with quiet determination. I've always known it was there and I love when it comes out.  I can still remember riding rides that were a bit scary but fun at the same time and that feeling of being so proud of yourself, having accomplished this thing. It's a big deal. 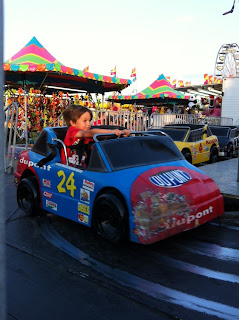 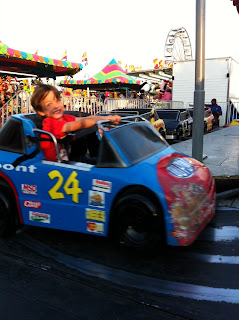 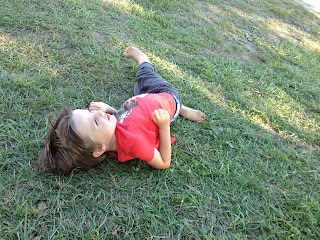 We sat on the front row of a small set of bleachers to watch the Jugglers.  This is a married couple we saw last year but little did we know, they also have a juggler SON. (he's sitting, wearing a hat)  I don't have many pictures but as I watched the insane feats this juggling family performed, I stared in amazement and declared, "That.  That is the life for me."   I was so jealous.  Why do weird things like this speak so loudly to me?  Why am i drawn to the juggler's life? They all began juggling when they were small and taught their son to juggle as a little kid and I just want this to be my life! Why??  They were truly amazing. Juggling a bunch of weird stuff all together, rotating, moving position.  Juggling while teetering on stuff, balancing on balls.  Wild. 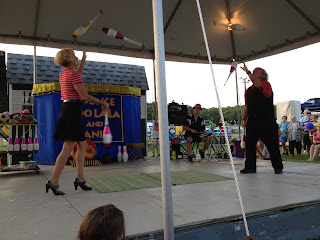 Two times this summer we rode on... a... MONSTER TRUCK! YEAH!!   Julian and I did it the first time but when we saw another at this fair, Sean had to do it too.  It is gooood times.  Here is a great pic capturing the moment amidst the wild ride: 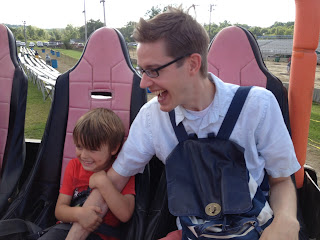 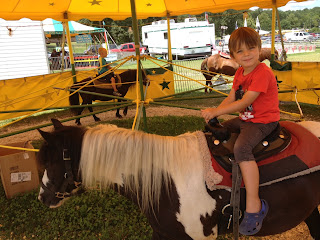 This next image shows a silly robot a la Kevin from Saved By the Bell.  There on the left. 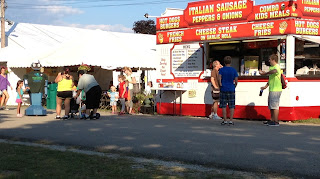 He would roll around and talk to people and everyone would wonder, how is this happening?? Is he a REAL robot and that's his real voice?? (he did sound just like Kevin, who was a real robot)

But no.  He was controlled or at least his voice came from another guy, and when you know he's there, he's all you can stare at because it turns totally weird and creepy.  He's the guy in the brown shirt and shorts holding the black case.  See him?

Next up is a pic of a man, a true fair-lover I only wish I could one day be.  This guy: 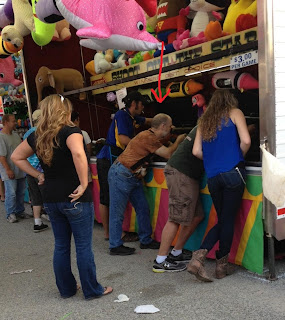 Why can i not resist? 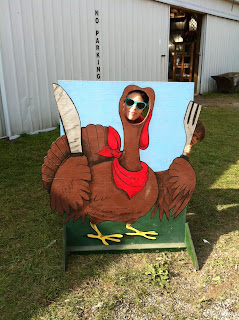 Hard times waiting in the hot sun for the ferris wheel. 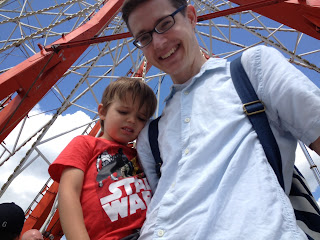 1. I started to die a thousand deaths at the pic of the baby goat, but then I was violently wrenched back to life and disgust when I realized the mom was "cleaning" (with her tongue) the baby's bum. Grody.

2. I love the pic of Sean and Julian in the monster truck because I thought, instead of your backpack on backwards, he was wearing overalls and really getting into the fair spirit.

The day Sean wears overalls is the day I finally learn what true happiness really is. (Same goes for him)

Ha ha. Isn't that the truth.