It's fun to read about happy things and to look on the bright side or appreciate simple pleasures in our lives, but I also think it's alright to recognize the sad things.  Not with the intent to dwell or wallow, perhaps, but to allow them their moment.  So, to go along with the happy things, here's a list of things that are making me sad these days. Because if you're a human, you know that happy and sad can be experienced right along with one another.

1. To be trivial, I'm sick. I have a cold.  It's not a bad one and I am very functional, but it's been a long time-- I made it through this entire outrageously long winter without getting sick. Not once, I don't think-- and right now I'm being reminded why nobody likes to be sick. I especially find it unpleasant in the spring on a nice day with the blossoms blooming and birds chirping. I can't really enjoy any of it. I feel like I'm in a cloud and that reminds me of Claritin commercials, which reminds me of allergies and I feel sympathy for those who suffer from them. Sorry, friends. I really am.

2. I'm sad that Justin Bieber has gone all Zack Attack on us.  Observe: 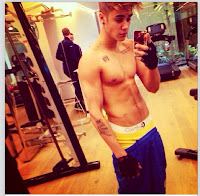 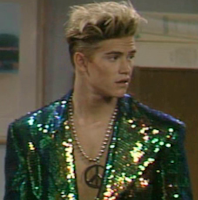 As you'll recall, Zack Attack is a band comprised of our favorite gang from Saved By The Bell, Slater, Kelly, Lisa, and Screech. Their hit is a single called Friends Forever.  All is going well until Zack's mind is poisoned by an evil agent by the name of... what? Anyone? anyone?  No, seriously. I can't find it anywhere and it's killing me. HOW DO I NOT KNOW?  Anyway, she convinces him he's better than them, that they're holding him back and he could go SO FAR as a solo artist.  He is persuaded and, well, nothing good happens. He turns into a sparkly open-shirted super star with a crazy stuck up hair and has completely forgotten who he is and what matter most, his friends who were all, luckily, quite musical.  Anyway, I feel like the exact same thing is happening to Bieber.  He was so adorable when he first started. I mean, his hair? C'mon.  Loved it. And he knew who he was and he was just pure.  Everything changed when he cut his hair. I hated his new cut the first moment I saw it and knew that ultimately, it would lead him to his downfall. Or at least nowhere good. Because now he's getting all tatt'ed out and is cussing and taking "selfies" (i'm using so many words in this post that i never have before in my life) and is getting into all sorts of trouble.  And I'm convinced it's because of his hair. He got Zack Attack hair!  Go back, Justin... go back.

I've expressed my love before.     Monday a friend who was running in the marathon put up a Facebook status saying something like, "Finished the race. We're fine and back at the hotel. Thoughts and prayers for those still out there"  and, having heard nothing, I was reading this purely in the context of a marathon. Now I imagine marathons are intense. As someone who goes into cardiac arrest just from running for the bus, I just don't think i could quite hack it as a marathoner, you might say.  But my reaction was like, geez, what's going on over there?? what kind of race is this?  I almost made a comment trying to be funny but thought better of it and investigated.  SURREAL.  Isn't it so strange when horrible things happen? the moment the facts start rolling in and the events unravel, the process of making sense of it all?  I read a bit and thought, surely it's not that big of deal. Even though I'm pretty sure I understand bombs = BAD.  It's just so jarring and it takes a while to accept that this is actually happening, that I have a personal friend who plain outran the thing, and when I texted to her, "well than your training REALLY paid off" she replied "Amen to that!"    She said it happened when she and her family were on the way back to the hotel. I also have friends who live nearby.  My nerves are a bit wracked.

Anyway, I won't go into the horribleness of it but I feel a serious pang in my heart for all of the runners who are amazing already, and for our beloved nearby pal Boston, and for lost lives and those affected. Because things like this just shouldn't be.  I saw a quote someone had put up and a sign that said NY *hearts*  B, and i said, "yes... yes we do."  Blugh.

But, to cheer us up, I checked out Zack Morris's wikipedia page which you really should visit.  Here's a favorite blurb under the heading "Extracurricular Activities":

Zack was also very musically talented. He was the lead singer and lead guitar player for a band called Zack Attack (in a dream). The other members were Kelly (vocals), Lisa (bass guitar), Slater (drums), and Screech (Keyboard). While this band never achieved the success that it did in Zack's dreams, it was good enough to get paid to play at local events. Zack Attack, however, offered to play for free at a school dance so that more money could be spent on decorations. This line-up featured Zack on vocals and guitar, Jessie on vocals, Lisa on bass guitar, Screech on keyboard, and Slater on drums. However, when Slater had to take over the lead vocals during the dance because Zack was outside talking to Kelly, when they broke up Ollie (a minor character on Saved by the Bell) took over on drums. Zack was also the lead singer of a 1950s-style doo-wop group, The Five Aces (a reference to the real-life group The Four Aces), that sang during a school sock hop. The other singers were Slater, Screech, Lisa, and Tori Scott (a student who transferred to Bayside during senior year). He was also a member of the glee club for a short time. He could also play the trombone.


Isn't it amazing?  Who wrote this? So dang funny. I always loved that aspect of SBTB, how everyone was involved in EVERY activity, EVER club, took EVERY class together.  I'd really love a breakdown of all the skills and abilities each student had.

For example, and off the top of my head:

Jessie
Student Body President
member of the glee club
played the flute
participated in oil-drilling protests
was a cheerleader
on the volleyball team
on the swimteam
in the school play (remember that scandalous kiss between her and zack?)
in a dance group (by the name of Hot Sundae)

And that's all i can think of for now.  Feel free to add to.

So that's my sad list right now. At least we ended on a happy note.   SBTB will do that.

I agree, but I also agree.

Sometimes it's difficult to know where to begin when talking about things going dreadfully, dreadfully wrong. But, it can't be right to just ignore them.

Also, spot on on Zach-Attack/Justin Beiber. I knew something was up, I just couldn't put my finger on it . . .

And yeah, that wikepedia page is amazing. Can we get that person to write all wikipedia pages?

"School is a bore, when we're stuck indoors
Make it fun, in the sun, hit the beach, teach—Let us learn while we buuuuuurn!"

4.5 years later and I'm just seeing that comment. I am totally singing the song in my head and it is so, so good. "let us learn while we burrrrn!" ha ha ha.

This post has really given a great idea on the concept. Thanks to the author of this blog for sharing.

This blog is very much helpful to us. Thanks for your information

Nice article I was really impressed by seeing this blog, it was very interesting and it is very useful for me.