Gearing Up, Shutting Down

It is upon us once again, the icy stare of winter that freezes your fingertips, nose, core, and then finally your soul, turning it to stone.  BUT, we're at the beginning and I find myself attempting to take precautions.  I know what i have to do, the problem is I just can't seem to do it.

First of all, let's back up.  In December, we had our tree, the lights, and the yule log on 24 hours a day. This made it right cozy in the house and dare I say a pleasure to be indoors. This is unusual since I can't make it a full day inside without losing a bit of myself to some stir craziness.  Seriously, not one day. It's terrible.  This from a natural-born hermit! Who am i?? I don't even know anymore.   But yeah, it was nice. So when January came and the tree went down, I told Sean what I needed was a tree to keep it cozy inside. A decorate tree. With ornaments! And lights! But not a Christmas tree. Because as much as i loved ours and as much as I strangely wasn't ready for Christmas to be over, I just have to move on once January 1st comes.  I can't hang on to Christmas after that.  So we piled in the car and drove to a nursery far away to select our Winter Tree, also known as a Tree to Get Jen Through the Winter, or TGJTW.  (that is a terrible acronym.)  Anyway, we found several that were gloriously green and lush. I considered getting a pine or something Christmas tree-like, but finally, despite our apartment being ill-suited for it (and despite my black-as-the-dead-of-night thumbs), we selected the finicky gardenia.  It looked like a miniature orange tree, with leaves so green, everything around it looked washed out.  We took it home and, as dreamed, decorated it with dollar store ornaments and blue lights.  Here it is: 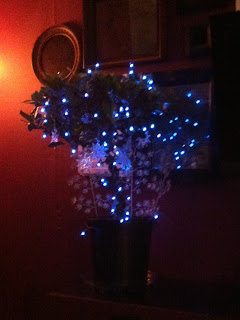 It was hard to get a good picture but there you go. We did ok for a week or two and realized it wasn't getting enough light, so i diligently moved it to the window every day, but I don't think it was enough. But one day, i walked by it in the evening and saw a single solitary blossom. 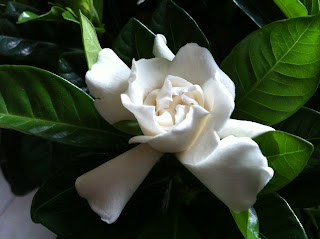 I tell you, the beauty and scent of that tiny thing filled the entire place.  And then it started to fail.  And the buds tried to open but couldn't quite get there.  So we took off the ornaments and nurtured it the best that we know how. Spraying the leaves, watering it but hopefully not too much. And the leaves started to turn yellow. and then tiny bugs appeared and, super grossed out, we finally accepted defeat and had to throw it out.   So long, Winter Tree.  It lasted us not quite a month, and died just in time for this January freeze-out to begin.  This blossom was glorious, and we only had one. I consider it symbolic and a sign of just what exactly it is we're up against, this bitter cold, the white flower a flag, waving a pungent and solemn surrender.

So now I'm left to other devices, like survival trips to the mall, survival brunches or movie parties with friends. Everything in the name of survival. Seeking survival conversations with people. Julian and I chase each other around the house for survival exercise.  But none of it seems quite enough. And I'm scared.  We're not quite there yet (I tell myself), but I am afraid.

And I try to pretend it isn't happening. That i wanted to stay inside all day because I was waiting for my very important box from Oriental Trading.  That I wanted to eat muffins every day and therefore needed to turn the oven on first thing in the morning every morning. For muffins, not to heat the house. Muffins! And hey, how long does it take for the oven to heat up again? Like an hour, right?  And I tell myself I'm not getting Cave Eyes from being indoors for so long, having nothing in the distance to gaze upon. That I already have terrible near-sightedness--it can't get worse! *nervous laughter*    Telling myself I avoid mirrors because I have vanity issues and not because I'm afraid that if I look, I will find Gollum eyes, enlarged and bulbous, blinking back at me. And suddenly I have a hankering for some juicy sweet fish from the river.

So. If you start getting an influx of letters from me, consider them survival letters. Letter-writing is one of my instinctual survival mechanisms.  I'll try to keep the tone light but there's a deeper message there, and it's either that  I'm (and not to be offensive) in what I call "Anne Frank Mode," where I pretend the outside is much worse, that if I were Anne Frank, this place would be a comfortable palace because at least i have my privacy and several books to read and windows to sit by and soak up some sunlight for 15 minutes every day because that's how much cruel Winter Sun will give me.  Or, it's that I may just completely succumb to winter soon and I just wanted to give you a token to remember me by. Something to read and re-read as one of the last parts of me left behind. You know, just something to treasure, or whatever.