Yes, Sean and I watched the Golden Globes and yes we loved them. Ok, I loved them. Sean enjoys them.  I'm not ashamed for loving award shows, especially when my BFFs are hosting.

And then, whenever they cut to Daniel Day-Lewis, the TV almost broke due to his insane beauty.  I have not yet seen Lincoln. I really really want to, but I'm afraid I'm going to go away with strange new feelings, having Hottie Day-Hotness playing the role.

So naturally when I saw a link to an "article" about him on MSN, i had to click, and it's one of the best decisions of my week. I already love him, as does the universe, but this sealed the deal:


First, the first line is possibly one of the best lines i've ever read:

Daniel Day-Lewis kept his acting work a secret from his children as they grew up and they were convinced he was a construction worker.

And then it just gets better:

The revered method actor, who is up for his third Oscar next month for his portrayal of President Abraham Lincoln, is intensely private, and even quit acting in the 1990s to become a cobbler, before returning to the big screen in 2002's "Gangs of New York."

And his Hollywood persona was such a mystery to his sons, his second child Ronan presumed he worked in construction.
He tells Britain's Daily Mirror, "They didn't even know what I was doing until a couple of years ago.
"In fact, my 14-year-old boy was asked what I did and he said, 'I think he's in construction.' That's how much they know!"

Anyway, just a little tidbit for you to brighten up your day.  Oh, and this: 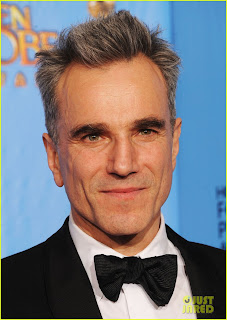