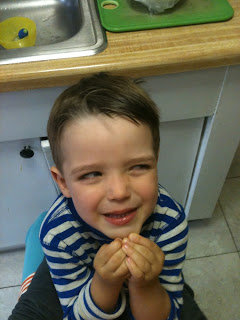 Julian turns 3 today.  The subject is a shout-out to one of our activities which is counting to ten in different languages. This is meant to make it look like we do lots of brain-stimulating activities and that he is well on his way to being part of the gifted and talented kid crowd.  It may happen (he is our child, afterall)  but it's a very small delusory piece of our actual day-to-day.   Actually what it is is me teaching my child pretty useless bits of information, things i like to instill in myself.  When Encarta '95 came out, i was obsessed and learned so many things in 20 different languages, mostly how to count to ten or say "hello."  I do happen to remember an Albanian proverb if anyone wants to hear.

Aaanyway, these days Julian's favorite is German, and I admit it's a fun one too. I get quite into it and he has developed a pretty good accent, as far as i can tell.

Things about Julian, and for a reference, here's what was happening when he was dos.

1.  At about 2 1/2, the words really started a-flowin'.   I don't even know what happened. What is going on when a kid goes to bed and wakes up completely different? Literally.  I mean, I'm this close to volunteering his little brain for brain and nighttime studies because seriously, what the hey.   And in just the past 1-2 weeks, we've had yet another nighttime mega-circuitry spazz-out (<-- technical term) going on, almost to the point where i feel unnerved, like i don't really know him anymore. It's weird. But cool i guess.

2. As soon as he could say his r's, Eeyotes completely died, and become Eeyore. I confess, it broke my heart a little. No matter how hard i tried to bring him back, Eeyotes was and will forevermore be Eeyore.  He knew it was supposed to be all along, i guess.  He just couldn't quite say it.  Oh Eeyotes, I miss you.

3. Julian and I took a music class and i don't know which of us loved it more.  I felt so proud when I could do the tricky rhythmic patterns and a few times, Julian surprised me and the teacher with his abilities and I tried not to appear too proud even though i was bursting inside.

4. He likes to be with friends but tends to hang out at the edge.  But he's interacting more and more and is exactly like his ol' ma in this regard.

5. He loves to swim. He loves the beach.  Julian will walk out into the waves and stretch out his arms as if to command the ocean.

6.   Julian loves museums.  He likes the childrens museums but art and science museums as well. Guess it's a good thing we live where we do, eh.

7.  Julian calls Sean "Sean" and it busts me up.  Sometimes he'll call me Jen-fer, which i also love because I remember saying my own name like that when i was small, and also because hardly anyone calls me Jennifer.   But my favorite is when he says in the sweetest little voice full of love and adoration, "Dada."  It's just so cute. Sean thinks it's manipulative but it's not. And I know it sounds like he's saying it like a baby but it's really adorable i swear. You have to hear it!

8.  Julian is developing his emotional maturity, to be sure. One thing that stands out to me is his comprehension of making amends, saying he's sorry.  He understands when he needs to, but not only that, he actually feels serious regret for things. It breaks my heart a little but i also feel like this is a pivotal thing in a person's life, a mostly valuable skill and quality we should all try to develop. To see him getting it at his young age fills my heart with hope and calm for his future life. I am astounded at his grasp of this intricate concept and he is an example to me to also be quick to apologize, and he teaches me the manner in which it must be done.  It is amazing, and I am humbled. 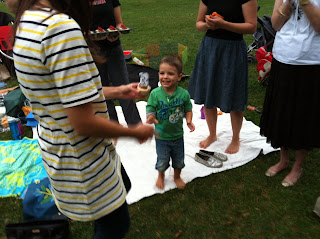 You have a cute little smarty there if he learning several languages. And why am I not teaching my kids languages?! I guess I do teach them words here and there but I totally need to be more clear-cut about it. Starting today! Tomorrow. Maybe next week.

Also, I love that he got a doll house. Doll houses are the best!