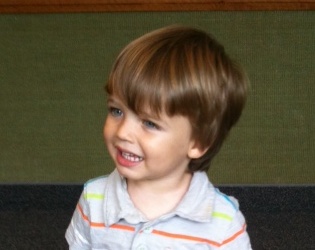 Julian turns two this day.  Let's do a tribute post to a kid who has a lot of great qualities.
Things about Julian:
1. He has the best hair of anyone i know.  Sometimes Sean and I will remark jealously how no matter what happens to it (when it's wet or whatever), it always looks good.
2. He has a great sense of humor. I really laugh at a lot of his jokes.
3. He is in love with his best friend, Eyotes.  No, not Eyore.  Eyotes.  (pronounced Ee-yotes)  He loves this thing more than life itself.  When we are out he talks about Eyotes.  When we come home he looks for him to hug and kiss.  When he says goodbye, he hugs and kisses him and says, "bye bye, Eyotes!" a hundred times.  Eyotes is too big for his bed so he doesn't sleep with Julian. So before going to bed, Julian says a fond farewell to him and it is rather touching to watch.
4. He sings all the time. He's very good. He's often right there pitch-wise and he makes up his own lyrics to real songs, which he learns in a heartbeat.  One of my favorite games is to sing a song and have Julian finish the phrase.  It's especially funny when he's upset or crying because even so, he can't help but sing the last word of the phrase when i start into a song.  Ha ha, sucker.   We aren't sure, because all kids like music, but we think he might have a knack for it. I'm not just saying that.
5. He loves books.  Love love loves them.  His favorite right now is probably this one.  He loves things that go.  Every day we will go for a walk down our busy street.  We see motorcycles, taxis, fire trucks, buses of all kinds, bicycles, ambulances, big trucks, little cars.  It's a magical place, our street.
6. Julian is still cautious but is a bit more daring. He isn't reckless.   He's very tentative about things.  He loves to talk to passersby.  Anyone who will listen will get an earful of "bus!"  "boat!"  "wiudjvlks.rks!" and then a hearty "BYE BYE!" when it's time to go.   I love the busy sidewalks and all the friendly interactions with people. It's a happy thing.
7. He's extremely thankful and appreciates thoughtfulness.  Julian says "thank you!" so adorably and in such funny situations. He either says it like this: "Tay too!"  Or more sing-songy: "TAY too!!"  going up on that first word. excuse me, "word."  He'll say it when he receives something, but he'll also say it when it's unnecessary kind of. For example: We were taking the subway into town and so carried his stroller down the stairs. When we got to the bottom he yelled out, "Tay too!"  as if we did him a huge favor.  It's just so weirdly polite. Makes me laugh. Or if he's carrying garbage and we say, "here Julian, give me that," he'll hand over the garbage and say, "tay too!"   Like we're helping him out.
8. He loves water. It is his beverage of choice. I especially like the way he says it: "Rarrer?"
9.  He's kind of a loner. He likes people but gets overwhelmed in crowds and often, i feel like i'm cramping his style if i try to play with him.  Also, i kind of wonder if he prefers adults. He has inside jokes with some of my friends.  seriously. I wish i were in on them. That said, he and I are pals. He's mine.We have a lot of jokes of our own.
10. Lastly, on a more touching note, there is a story I have been telling Julian ever since he was born.  It is the story of the day he was born.  It starts out, "Once upon a time, there was a little boy named Julian, and Julian was born on the hottest day of the summer..."   I tell it the same way every time with a few add-ons for the ever-changing days as he gets older.  There is a magical moment when you start telling this story and your kid finishes a line for you.  Heart: *SWELL*  3 cheers for things like this.
Happy birthday, Julian.  Can't believe you're 2.
Posted by )en at 7:01 AM

That is one charming kid you have there.

Enjoy the awesome hair until he turns 4 or 5 and it becomes more adult-like. Such an understated tragedy.

Happy Birthday Julian! Yeah for turning 2. (This is posted by Rachel in case the Ms. Michael thing throws you.)

To the kid I'm most likely to pick up and head to Mexico with: Happy Birthday!

Who knew two year old Julian would be even funnier than one year old Julian?? I forever thank you and Sean for raising a kid who has an excellent and ever developing since of humor. That's my favorite thing about him, and let's face it, the reason I find him superior over all other children.

I am also fond of the way he holds my hand when we walk together, making sure to look allllllll the way up to my face while we walk and talk.

What can I say? The kid's got skillz.

Gotta say that I think Julian's big cuz around these parts has some similarities to the awesome Jules. Collin only plays with adults, and he's very cautious about everything. I'd definitely call him a loner too. Maybe it's an only-child thing. We've got to let these two spend some more time together! Happy bday, Julian!

Yeah, this is really sweet, but I actually thought this was going to be a post on the DOS operating systems. I mean, it dominated the PC compatible market for years.

Happy birthday do your boy, and consider a second DOS post.

Ha! As if i don't already have a post in my drafts. There's just too much to say-- but i did want to use the title.

Lindsey--fun. One day we'll have to get these boys together. One day...

Loved all these comments. Thanks friends. (Yes i'm lumping you together.)