A few weeks ago I lovingly said to Sean, "Sean, I need a vacation OR ELSE"  and i did the cutting-off-head sign.  So we three took a little jaunt up the coast to a little village called Ogunquit, Maine.  We visited this once before, but when we were only two.  Can't believe that was 6 years ago. What the what?

Anyway, it was guh-LORIOUS.  All i wanted to do was get a motel with a kitchen and laze, read, beach, swim, laze, read, eat.  And that's exactly what we did.  I didn't take too many pictures but i did take some.  I'll throw in a few Sean quotes too, of course.

It was a great drive. I imagine with older kids you have to stop a lot but we drove for the 5 straight hours, leaving at 9:30, arriving at 2:30 just in time for check-in.  Perf. Julian was a champy champ and humored us and our geography games.  This time we played "Asia"  (going back and forth saying countries. The last person to be able to give a country wins)  and once again, Sean had some disputations. Taiwan is totally a country!! Are you kidding me?!    I can't remember where this one ended. I think i ended with Sri Lanka and then we just gave up because we weren't sure what counted as Asia... like southeast Asia. All the little Islands? Is that considered "Oceania" and is that a new continent? Or Australasia?  Who knows. I don't know.   I think I win just for a) not disputing Taiwan, and b) not thinking UKRAINE was part of Asia.     p.s. i don't care if it's true about Taiwan. If it is, I don't want to know. I'll never accept it.  Like Pluto being off the list of planets in our solar system. No!

It was Sean's turn.

So we drove north through Connecticut, Massachusetts, New Hampshire, and then to Maine. Can I just say how much I love driving through multiple states? I think i already have, so can I just say it again?  We would do a cheer each time and taught Julian how to say the names and some fun facts about each one.

We either passed or were reminded that the L.L. Bean outlets or main hub was located on our way and we talked about our feelings regarding L. L. Bean.  I had fond memories of L. L. Bean catalogs around the house and my mom was always having us select clothes from them.  Now, having achieved my own sense of style, I see a discrepancy there.

Jen:  It was just what we wore.  That's what I had to choose from, as a youth. Mom clothes.

Brahhaha.  So true.  Also, no offense if you like L.L. Bean, or lumberjacks. I have had my share of love affairs with total mom clothing brands.  (may you rest in peace, old capris. Old Glorias, as i called them.)

We also had a lengthy discussion about our shared disdain for clothing outlets.  HATE.  It's seriously on my list of Jen's Personal Hell.   Sean nailed it so hard on the head, it split the wood on outlets:

Clothes you don't want in sizes that don't fit you.

We had one spoonerism, that i wrote down:

And one nonsense mess-up:

Jen: We need to do that as soon as quickly. Imean--Shut up!

My brain betrays me so much these days, it seems.

Now for some pictures.

When we first moved here to B-town, we went a-walking one day and found a weird shop down the road that is no more, and bought two of these beauties: 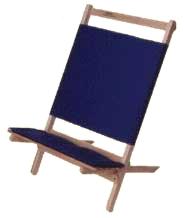 We've had them basically our entire marriage life and have loved and used them dearly, mostly taking them to the park, but also to the beach and on camping trips.  I actually can't believe i don't have a pic of them on hand because they are just a part of the family as anyone.
Anyway, we were relaxing under the umbrella when we remembered what they were.

Jen:  The Maine Lounger! Sean! they finally made the journey home! 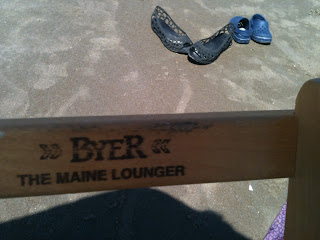 I took this next picture for a friend who gave me this headband a few years ago. I was visiting her and so had my toiletry bag where the headband has made its home. I like to bust it out when i'm on trips. It's seen a lot of places, this headband.  It's a little bit crusty and yellow in places but that's part of its charm. 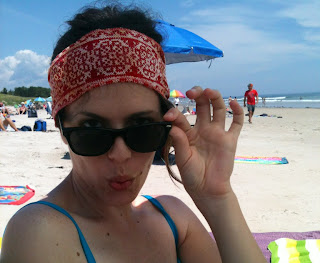 I can't tell you how much I love waking up, then eating breakfast, changing into a swimsuit, and going to the beach for most of the day.  We were so enchanted by this whole town. It was a beach town but not skeezy beach down.  Think "antiques and ice cream shops" beach town. Add the quaint new englander accent and it's just a pocket of treasures and delights. The beach was beautiful, the tide was weirdly swift--we kept having to move back our stuff. Pretty sure it moved a hundred feet in a couple of hours--the people were sparse as beaches i am used to go, and everyone was pleasant and happy and the water wasn't even too frigid.  And, bonus, while everyone was suffering from perpetual heat stroke in Bklyn, we had low 80's. It was perfect. 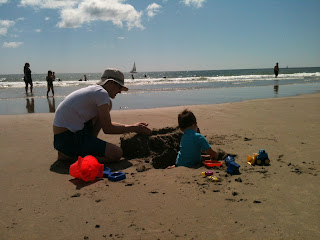 No beach trip is official until Sean makes a creation.  Here is "bus in quick sand" or "too lazy to dig out enough sand to make a complete bus." 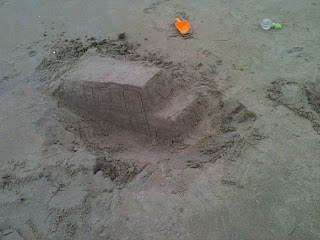 Julian requested all of Sean's sandsculptures. Next was a taxi, of course: 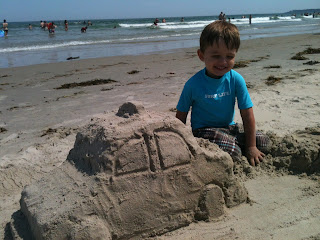 And then a kitty cat. 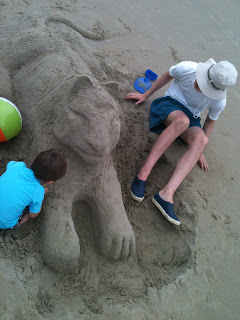 First it was just a cat, and then a lion. Sean said it was a NY public library lion.  But then Julian said it was a tiger, and Sean agreed it kind of did look like a tiger.  We finally ended up deciding it was a liger, and when passersby paused to smile and exclaim what a cute lion it was, i would say under my breath, "it's a liger." Finally i just labeled it, in block letters with tiger stripes. Too bad i didn't take a pic of that. 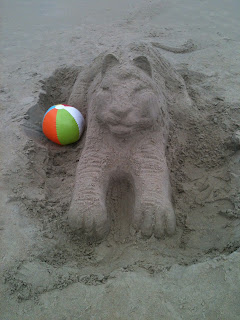 We took a trolley bus into town for some lemon sorbet and shopping. 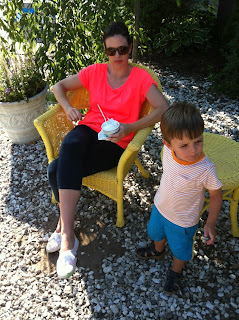 To Sean's delight, we did some mini-golfing.  I have mixed feelings about mini-golf. I think i like it ok but i have some bad associations that became more apparent to me as we tried to play our game with the little lad who just wanted to play around but we had to keep rushing on to the next one because of people behind us ready to play. I think i remember that pressure when i was a youngin' and it stressed me out, so I understand that Julian wasn't so much in love. But he didn't hate.  We would help him putt the first time and then he'd run off, so we eventually gave up on that and focused on our serious game, Jen vs. Sean.  While playing, we were not competitive at all and though Sean kept score, it wasn't until later that night when we added it up. 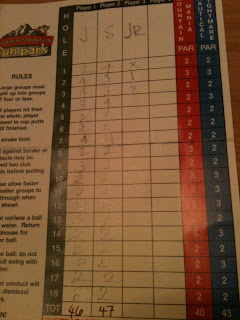 OHHH! Won by one point!! I suddenly became competitive at that moment, hours later, latent trash-talk.
Sean got a hole-in-one and I did too, but on Julian's behalf. Sean said "so you could say, we all got one."  Except i think mine counts extra, for me, because i had little kid's hands on the putter as well, making my shot more difficult.  What. Who's competitive?

Here I am, taking a moment to bask in my impending victory, unawares. 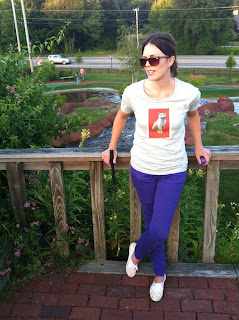 We came to this green and we were immediately caught by such blatant obscenity. Right?? 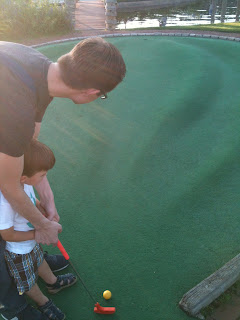 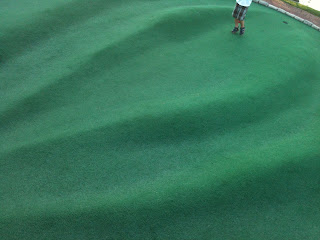 Gross.   And you thought this was a family place.
And here we are at the Lobster Pound where we ate lobster by the pound, and some other stuff. Here I am excited for some blueberry pie & blueberry crumble. Julian is also excited if a bit nervous. 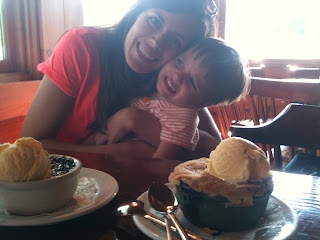 Don't you love perfect, 100% successful trips? 3 cheers for Maine. I'd go back in a heartbeat.

I really want to go on a roadtrip with you guys again, you make it so fun. Mainly I want to command sand sculptures.

Also re: ASAQ and the pervy golf photos: hahahahaha!

Let's take a beach trip togeths. I will pimp out Sean and his sculpting skills.