This is going to be the most hodgepodgy collection of photos ever.  I'm trying my darndest to somehow make them cohesive but their randomness just can't be tamed.  So i will put them up together, wild and free.
A few months ago Julian and I took a trip to Utah.  We did many fun things there including play with Grandma's 3 trillion toys, visit museums and indoor pools, talk to family, go bowling, etc. But one thing stole Julian's heart after it skipped some beats.  First of all, one great thing about visiting the Utah family is that it's the perfect kind of "farm."  For all intents and purposes, mine being to say we go to "Grandma's farm in the country."   There's a barn, there's a sizable garden, sometimes there's a cow in a pasture. And part of visiting Grandma's in the country is putting on extra layers of random clothes from the depths of the closet.  Here is farmer Julian in all denim. I really couldn't be more proud (or jealous).     But what's he so excited about? 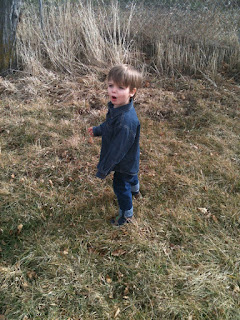 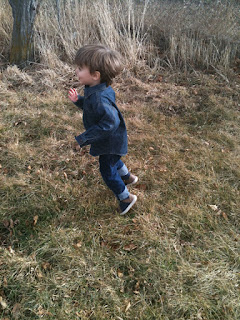 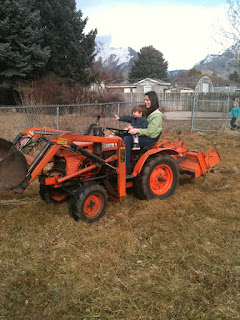 What I loved most about it was taking a contemplative solitary ride on Big K, my childhood tractor. Fond memories. 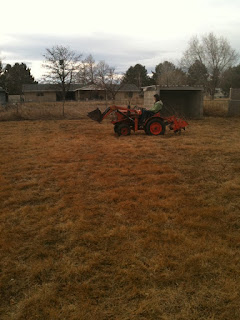 False. That is the first time i've ever driven a tractor. But it paints a pretty picture, doesn't it. Just a girl and her tractor.
Also while in utah, it snowed a heavy wet storm, and another quintessential "stay at the grandparents" thing, something I remember from my own childhood (a real memory this time) visiting my grandparents in snow-bounteous Idaho, is dressing in old winter clothes of yore.  I'm pretty sure i even tied a shawl around my head at my grandparents' because there wasn't a hat, and i loved it. I think even then I knew it was magical. But that could be because shawls are already pretty magical things.
So we scrapped together what we could find and headed to the hills for sledding, one of the top 5 things that make me happiest in the world.
Here's Grandma and grandson, sharing a bonding moment with snowpants. 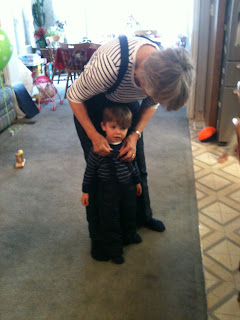 And here i am showing what we believe to be my brother's boots from olden times, which i remember fondly. 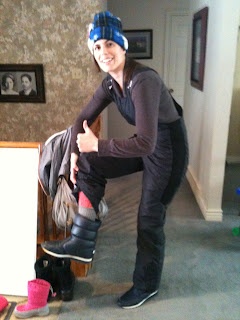 Although, I'm not sure he appreciated it as much as he should have when i texted this picture to him. Aren't we all attached to our childhood boots on some level? I can't be the only one.  So you can imagine my heartbreak when my mom told me she had finally found my little kid rainbow moonboot the other day, only to have thrown its mate away months ago because she never could find the other one.  Ahhhh even now. It's too painful. I'm sorry, i've got to move on.
But before I do, p.s. I made that hat in my Sports Sewing class in high school. That's right. Etsy, here i come.
Quiet moment watching the snow. 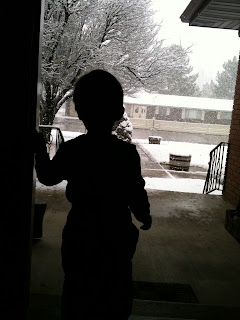 And here we have mother and son in a wintery scene.
I think Julian's wearing a new jacket over his toggle coat in an attempt to be waterproof. Also, wearing his cousin's girl boots. 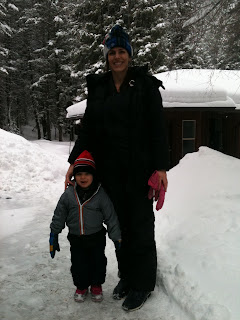 Here is Julian eating ebel skievers (i will never know the correct spelling/pronunciation), an old sunday night tradition.  It's nice and sentimental, but i also like this pic because he looks like a podling. 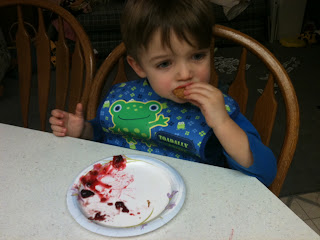 And then spring arrived in Brooklyn.  And all the world was a-blossoming. 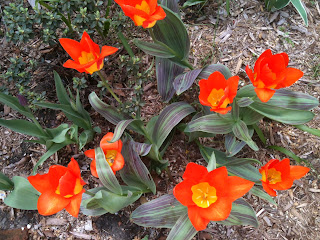 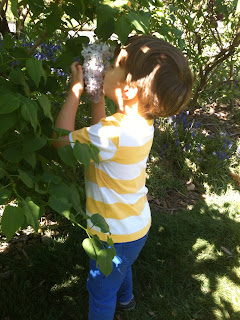 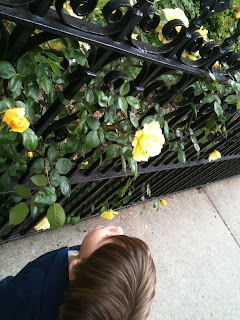 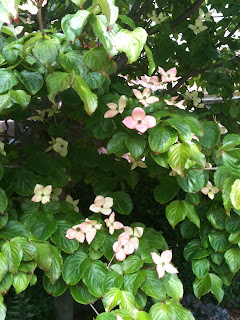 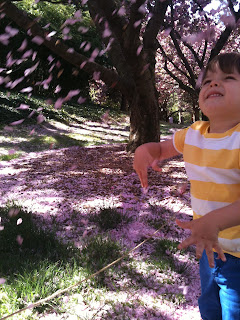 It's been pretty rainy these days.  I really loathe it, but it makes for some good puddle jumping. 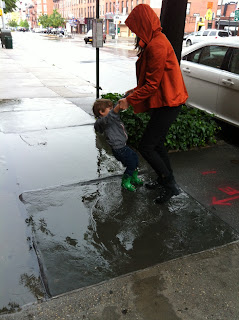 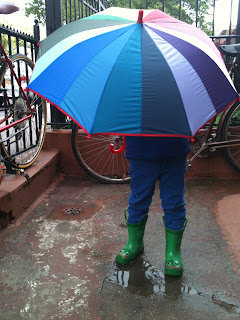 And then we visited Willy Wonka's chocolate factory and in it, the famed chocolate river. 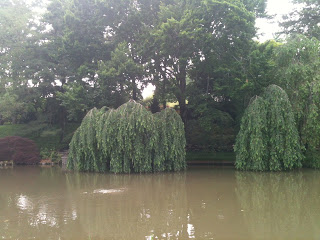 Actually that is an extra murky Japanese pond at the Botanic Gardens. But if that were in the chocolate factory, what kind of candy flavor would all of that foliage have?? 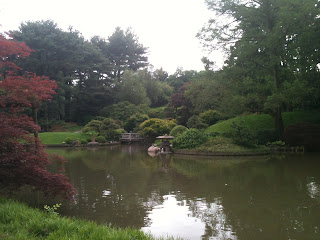 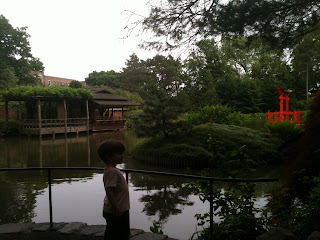 While we were walking around, i was a little impatient to move on and was pulling on Julian to come along and i left him where he stood planted. After i walked a bit he said, "a bunny!"   "c'mon!"  i said.  "Look, a bunny" he said.  "what? yeah right" i said, coming back to see and there was indeed an adorable brown bunny looking at  us.     The bunny hopped away, never to be seen again but we looked anyway. After a time, I gave up saying, "C'mon, Julian. He's gone."   "No! He's there!" he said.  And i crouched to his level and sure enough, there was the little bunny looking at us.   I was humbled and learned a valuable lesson: kids apparently have special bunny-sensor eyes.


Easter came and you saw our video, but here are some stills: 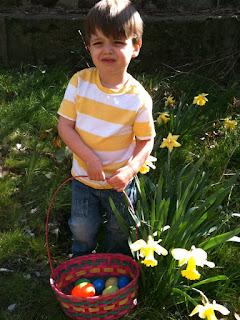 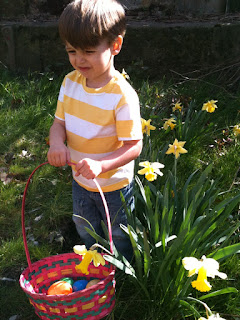 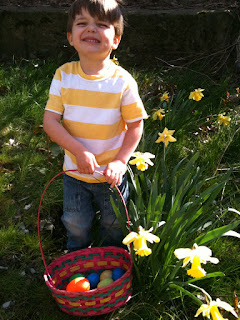 Apparently Julian has but one shirt to wear.

Something I love are little Brooklyn gift shops of wonder.  They have everything fun. Little knick knacks and doodads and toys and games and books and things.  One of my favorites is called Scaredy Kat and it's a happy place for all of us.  I love that when we go, Julian makes himself at home with the super cool cars. 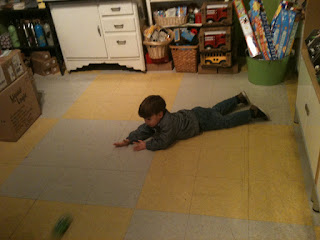 I think the store owners love it too.  I am ignoring what's going on, neglecting keeping after my child, because while he's doing that, I, with hearts for eyes, am engrossed in perusing the stack o' stickers.

We go on lots of walks, sit on a lot of stoops, step up onto steps and explore the nooks and crannies. I told Julian to stand there and pose and he gave me this: 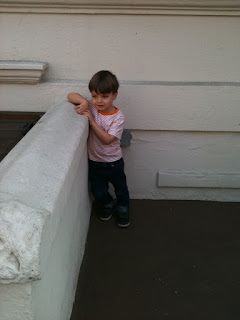 We've reached a major milestone around here. It is wondrous and fills me with jubilation.  Julian has reached the age where eating out is fun and doable. If i had to choose just one, probably my most favorite thing about the warm months is eating out on restaurant patios.  Also in my top 5 list of things that bring me supreme joy. 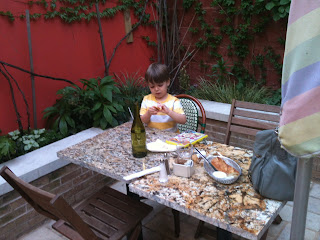 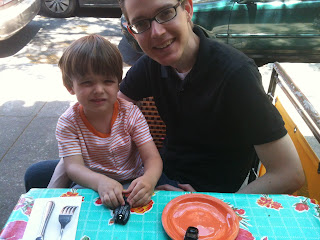 Ok, two. He has two shirts.

One night I went out with friends to see a horrible movie at the Tribeca Film Festival.  It was totally fun to do and it ended late.  While waiting for the train to come, there was this seriously creepy lady who just stood there, hunched over, glaring at everyone. I hurried and snapped a pic as the train rolled in: 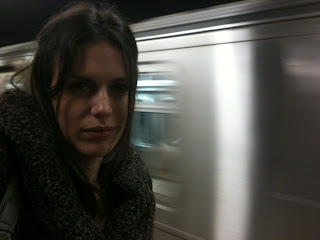 Yikes.
Remember when i was in a band and we recorded an album? Yeah, i forget too.  Except i don't because it was one of the coolest things i've done and am so happy to have done it. Well, several of the songs are about New York and Brooklyn and the feelings one feels after having lived here for a time.    One of my favorite things is to put it on in the car (pretty sure music is best listened to in the car) and play all the New York songs. (also pretty sure listening to your own CD = super cool) It makes me feel quite nostalgic for a city I live in, something a friend put into words for me which is how i feel exactly. And i love to look at people walking and whatever song is playing, I pretend is their theme song, and i make up what is going on in their life, what they are feeling, according to the song. It is their soundtrack, for a few seconds.     I saw this picture the other day and it only added to the nostalgia. 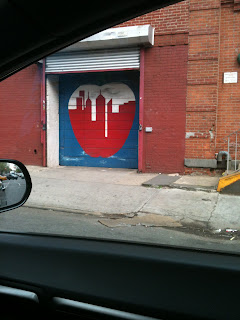 Lastly, because it seems an appropriate end to a blog post that could potentially never end, here is Sean hard at work.  I've said it before and i'll say it again,  "Sean, your art is the best art of all the art." 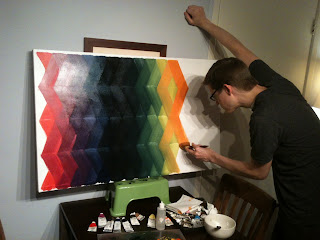 We love Scaredy Kat too! I love love 5th avenue. I would live over there for sure. We should go together sometime. Oh, also I love Sean's painting. How do we buy Sean art? Commission only?

I DO remember my childhood boots! In fact, we still have them at the cabin. They were the best, and all other kid snow boots afterward were a huge disappointment. I think I tried to wear them long after they were too small. In fact, I remember wearing them with your family...some place where the roof of the place we were staying went all the way down to the snow, and our older brothers were sledding down the roof. And my boot got stuck in a snow drift, and my foot got freezing cold bare in the snow, and I'm pretty sure I cried about it and my Mom was no where near as concerned as I thought she should be. I think we were only like 5 or something...Random memory spurred by your post and my freaking awesome boots. Remember that?

What, what, WHAT is Sports Sewing?

Also, you're right, Sean's art is the best art in the world.

ROB! I think I totally do!! Was that at the snowy winter lodge of wonders? Seriously i remember like 5 feet of snow. Sorry about your boot. :( If it helps, i think at that same event, my brothers threw my purple doll into the giant ceiling fan and scuffed up her face.

Sports Sewing: A class someone who is inept at sewing thinks they can take that will be slightly more geared toward their skills. Guess what? We still had to sew, just ugly things like fleece hats and a rugby shirt.

Sean's art is available. Inquire within.