So I had some pictures on my phone. Thought I'd put them up. This is going to be a hodgepodgy post.  Is there any other kind?

First of all, we were hit with a stupid snow storm on Saturday.  I don't even want to give it the courtesy of talking about it but whatever, it was pretty freakish.  My sister and I have a made-up a word for very very wet snow falling called Snain.  For example, we will say "oh no, it is snaining."  Yes, we are geniuses.  (this is different from sleet, by the way, because with sleet there is wind too, no?)   Anyway, and this time I had to invent yet another word:  Snush.  These flakes were huge, suuuper wet and coming down fast, and actually stuck.  It was just the right temperature and the flakes were wet and huge enough to juuust stick, but only as slush, with a thin white layer of fresh snowflakes on top for 5 seconds until they, too, turned to snush.  We had about 4-5 inches of snush.  It was weird, and pretty disgusting, frankly.  At one point during the storm, amid the giant flakefall, we heard a loud boom of thunder.  Say what?  Sean and i simultaneously gave each other startled looks of: 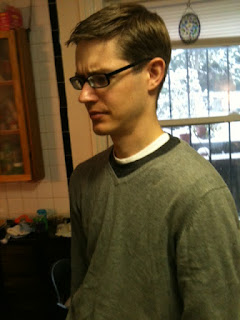 Never had a thunderzzard before.   Or a blunderstorm, which is probably way better.

A few weeks ago we were driving into the cit-ay and at a traffic light I saw this: 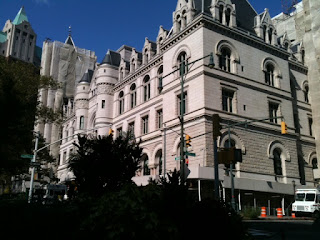 A castle hidden in a building!  Love it.  I don't know many things, but I do know this: one day my house will have at least one turret.  If not be made up entirely of one.

Julian and I had a city adventure.  First we went to Dylan's for some Halloween candy. Yay. Then we went to FAO Schwartz to play with all the toys. Yay.  Then we ate hotdogs in C. Park and looked at a weird sculpture. Double yay. 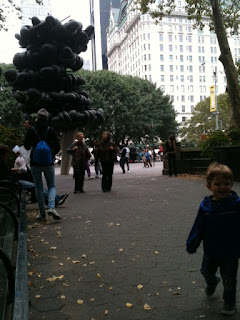 Speaking of sculptures, we saw this one a different day at Union Square: 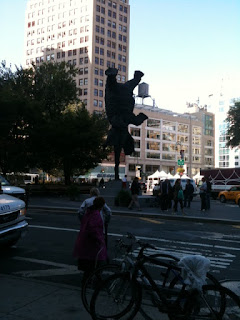 Elephant balancing on his trunk.  I thought it seemed so strange at the time but now i wonder how i could have gone so long living here without seeing one.

So I did another apple ugly.  Except I decided to make an apple beauty: 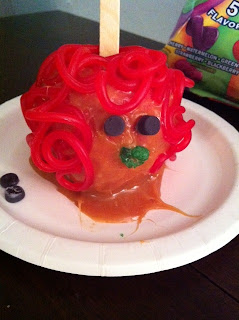 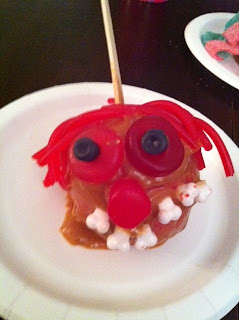 p.s.  click here to see pics of me and how I decorated my apple ugly 10 years ago.

This is from a while ago but I really love this picture.  Like a lot. 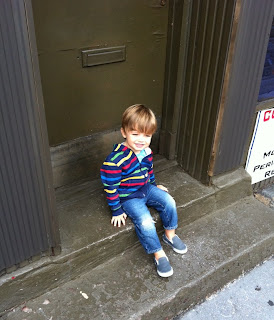 Also from a while ago.  Fortunately for us, the nearby Botanic Gardens have Jurassic Park trees. *whew* 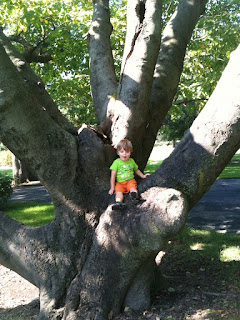 While waiting for the bus one day, an answer to a lifelong question was finally answered.  The question? If i could choose anything, what would be my dream car? 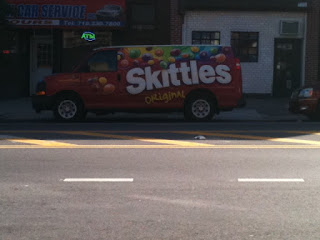 A few weeks ago we went up north a bit and took a tour of a big neo-gothic mansion in Tarrytown, NY. The fall was made for these tiny towns.  The building was creepy and weird, inhabited by rich New Yorkers in the 1800's+, so that made it feel Halloween-y.  And, our tour guide was old, mean, and a little scary, so that added to the ambiance as well.  (I am NOT saying old people = Halloween.  Or maybe I am.  You don't see zombie babies or zombie mummies, do you? And they'd probably be cute.)  (I love old people.)  (Except mean scary ones)   What was i even talking about? Oh the building: 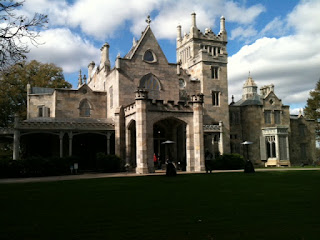 Afterward we found this super eerie grove of trees whose limbs touched the ground all the way around.  i.e. Jen's A kid's dreamland.  Jen A kid would live there. Sean and I walked around talking about where the bathroom would be, for example, because that little hole in the tree could hold a toothbrush, and that knot there would hold the soap... 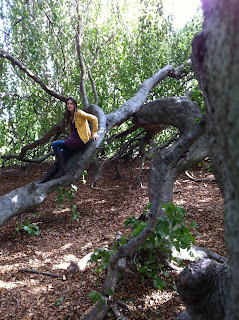 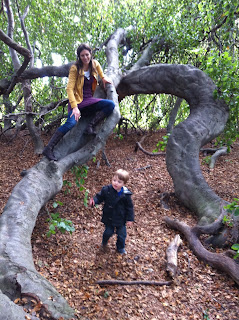 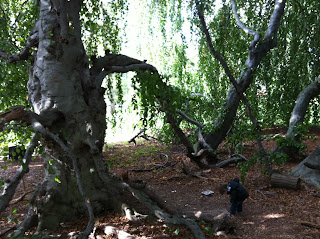 One night we prepped a delicious salad.  As I took mine from the table to go eat on the couch, because that's how we do around here, I forgot that either the bowl or my fingers were made entirely of butter but the next thing I knew, that bowl slipped out of my fingers and for the third time that month, I took a potentially unpleasant disaster and made it 300 times worse by smacking at it and sending it across the room. 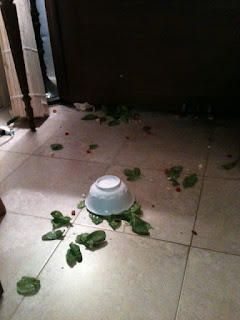 Goat cheese on the piano? Don't mind if I do.

By the way, for entertainment purposes, the other incidents:

2) I was standing at the long narrow table. I knocked something over on it, which knocked a tall glass over (which broke), which knocked 2 more glasses over.  As one fell off the edge, I simultaneously kneed it into the garbage that was underneath (thereby, saving its life) while trying to catch another one with my foot but instead I rocket-kicked it across the room showering everything in glass shards at 50mph.  Way to go!

To close, I would like to leave this etched in your brain: 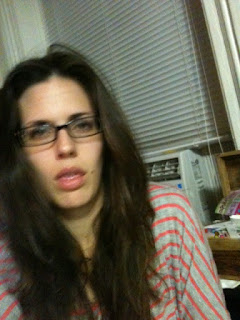 My sister sent me a "Happy Halloween" text with a pic of her daughter in costume. I sent her one of Julian in return, and this for good measure (and a proper Halloween scare).


* Super lame! i initially had "random pictures" as the title and then wrote the first paragraph, then went back and changed the title to "Pictures 'n Stuff" and left the first paragraph to make absolute 0 sense.  Well, i've now changed it back, so this will mean nothing to new readers, but I simply had to explain to old readers who find themselves coming back to read the same post again and again and again.
Posted by )en at 6:25 PM

I love your smacking-at-things-that-have-already-fallen and rocket-kick reflexes. Your telling is so vivid, and it makes me laugh.

And both apple uglies are winners. Loved 'em.

Kudos for posting that picture of yourself. The internet is forever.

I'm with Ash: the rocket-kick is so Jen and I love it.

Haha on "Thanks Jen, for needing to be in every picture"