What is happening here?

Once again, my kitchen proves to be a black hole for the laws of science and nature.

I was perusing my spice cupboard in search of a few items when I observed something taking place that just should not be.  Let's take a look: 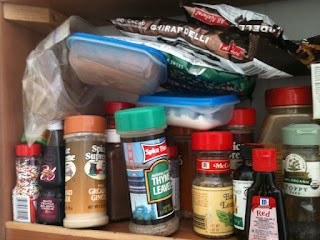 First of all, it appears I (obviously it was me) attempted to balance 3 haphazardly stacked bags of chocolate onto a totally unstable tupperware containing some white who-knows-what-- it appears to be resting on a single canister of some spice or another-- rendering the other small tupperware (of cinnamon sugar? is my guess)  in peril by forcing it to totter on tip-toe on a single corner. A flimsy bag of cloves is pathetically attempting to be of some help, but what can he do? All of this is all but shoving the poor but valiant thyme to an early demise.  An innocent bystander, he has appeared to somehow plant a foot to stay the pile. If he could just hang on! But it's only a matter of thyme.
Posted by )en at 1:25 PM

Only solution is to eat the chocolate pronto.

So, if you had to identify which one of those items best represents you, which would it be? Are you barely hanging on, like the Thyme? Are you the tupperware container throwing everything off balance? Are you the red food coloring, an innocent bystander?

I would have to say... I'm probably the bag of cloves. Trying to be helpful but the help is minimal.

Or I could be the cinnamon sugar Tupperware. What the hey is happening?? Ah, I got a foot steady. I'm fine. (I don't really know what I'm talking about). Still, I really like this. I wonder what others would have to say