Christmas and the Big Snow

For Christmas, Julian got a new book called Katy and the Big Snow. (this is to match his other book, The Little House, which he can read when he wants to live in the country. Katy is a snow plow that saves the day.)  We didn't know Katy would also be a foreshadowment (<-- made-up word alert! i like it better than 'ing) of what was to come.
We had a bounteous Christmas this year. Thanks to everyone who gave us presents. This is truly the real meaning of Christmas and we felt it heartily.
Here is a picture of Julian reading Katy (upside down, naturally. He probably knew i was snapping a pic and wanted the viewers to see the illustrations. Look at his hand displaying it): 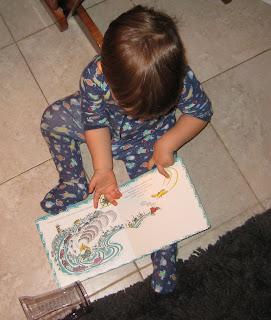 It was SO fun spending Christmas morning with these gals.  It made the day extra special. Julian enjoyed helping them look through their stockings while Sean made Christmas omelets. 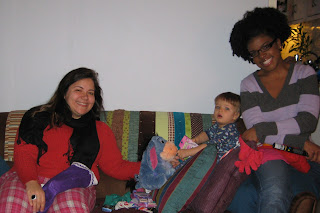 When I was young, we would get punished by having to go "sit on the chair" which meant sitting on a chair in the corner of the dining room for an eternal length of time, and not get off it.   I would side-step this rule by moving around holding the chair to me, while i grabbed a toy or a book and scurried back to my corner.   This year, Julian got his own little mini-chair . It's seriously the smallest cutest thing I've ever seen. Made by the hands of his uncle Jeremy.  It also has his name on it and we all know how much I Julian loves personalized presents. 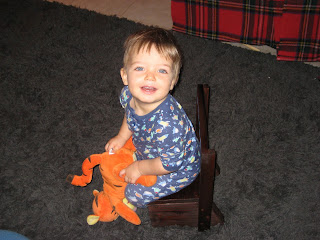 So small! So cute. It's like doll furniture.  Tiny Chair has not been used as a form of punishment... yet.  I'm not sure it would work anyway. He would probably sit on it and smile and i would smile and then be forced to grab him and we'd laugh and roll around at the foot of the dear small chair and no one would learn any lessons.
Here's a pic of our bounty. Julian's smallness making him look like part of the bounty reminds me of another Christmas when my sister and i got gigantor dolls.  They were huge. They'd sit on the floor and be bigger than you.  She got the girl doll. I got the boy.  That's how it was.   Look at our cute boy doll in his doll chair. 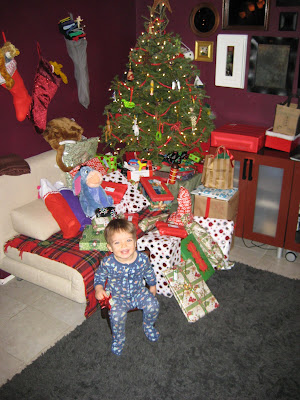 Notice the two stuffed animals that Julian got for Christmas last year, that we immediately put away, never to be seen again until we pulled them out again this year as a re-gift to the same person who is none the wiser. Gotta love that.
Sean with the bounty: 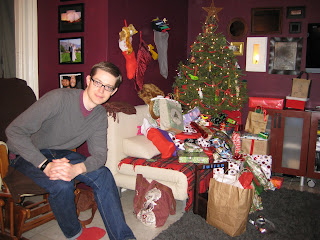 Julian doesn't walk.  Yeah, it's past 16 months now, and by "it" i mean Julian and his age. We're seeing how long he can go.  What he does, rather, is hop on his knees. Hop hop hop. Jump jump jump.  Sometimes he actually walks on his knees too. But he loves to hop.  I said we should put shoes under his knees and people will think he walks.  Amber, dear friend and amazing illustrator, made this for him. 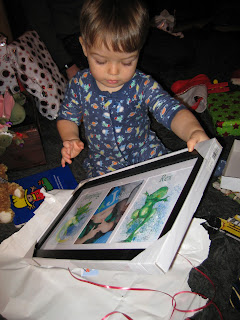 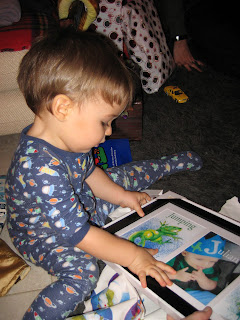 So amazing. So cute. Little jumping J-Rex. We LOVE it. Thank you thank you AA.
Ashley, the ever-creative, made these for us. I love creative gifts, and I love my name. A gift using my name? The perfect gift. 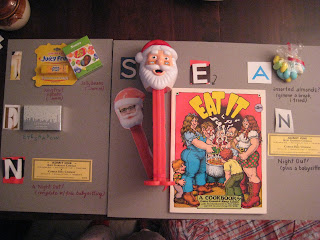 Sean got a copper pot for Christmas. Isn't it pretty? Some time when it isn't very awkward, I will inform Sean as to how it's actually supposed to be used. 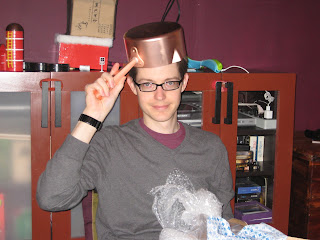 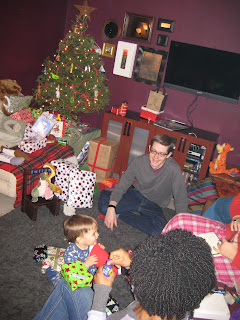 Julian got a new soft snake, his old/new stuffed animals, a dinosaur, a teddy bear from FAO Schwartz, and others from various occasions.  Let me tell you, this tiny person loves the stuffed animals. Really, anything fuzzy.  And when he sees it, he screams like a girl like he's been reunited with a beloved friend who was lost at sea for 75 years.  Every time. And he clutches it and hugs it in his neck.  I probably encourage this as i scream too, just overwhelmed by the excitement of it all.  But it is very funny.  He screams when he sees his furry boots. He got a new dinosaur bedtime book and there are images of the dinosaur's teddy bear on almost every page. When we read it, Julian points at the teddy bear and screams.
When we went to FAO,, the entire first floor is filled with every stuffed animal ever dreamed of. Different breeds of dogs--everything in multiple sizes. Crazy.   See images here, here and here. We would go down each aisle and i'd place every animal in his lap and we'd both scream.  Sheer delight. (in the end, he got one similar to this, but i'm now thinking we probably should have gotten this. Right?)
The day after Christmas, it began to snow. Snow snow snow.  They warn us of big snows and we think, bah, it won't be true.   This time, it was true.   We drove to a party.  Snowing. Blizzarding. Lots of snowy blizzardness.  We left the party. I had to get out and push the car. It felt like needles were high-fiving my face, over and over. While pushing, I fell in the snow. It was great.
After getting stuck about 8 times on the way home, and at the very end at the intersection near our home, I abandoned Sean to put Julian to bed while Sean stayed out and tried to rescue the car which he finally did, on the brink of hypothermia.  Before that night I'd never touched hair that was a completely frozen helmet, and that's what his was.
It blizzarded all night. In the morning we woke up to mounds and mounds of snow.  We couldn't open our door. We were literally snowed in.  Fortunately (for us), Amber was with us for the first couple of days, as she was stranded and we the snow prevented her from going home.  She kept us entertained and we were most grateful. What a champ to make do with a flimsy hotel toothbrush and a borrowed contact case.   To read about her snowy adventures with us and to see some pics, including one of the abominable snowjen, go to her blog here.
I'm taking this from Amber as well. I love it! Amazing.
So, I won't going on and on and on about how much I hate the snow, and how it so painfully ruined my life this year by preventing me from taking a sister trip to San Diego to see a friend get married and how if i were to become a sorceress, I would completely eliminate snow and winter. Instead, I will just show you many pictures of our adventures the past 5 days.  We took Julian out back where the snow was untouched.  We hiked to the store to get supplies.  It takes many days to dig people out when we get a huge white-out in this town. And if you don't live on a main road, expect it to take several days to even get it sort of plowed.  Oh, how we needed Katy this day. Oh how we did indeed.
These cars here were stuck.  There were so many cars scattered, marooned in the streets. 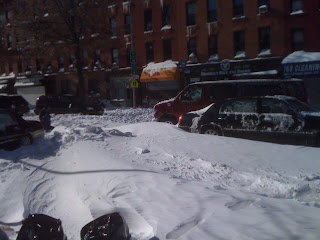 Julian wasn't sure how to feel about the snow. I remained silent so as to unbias him. 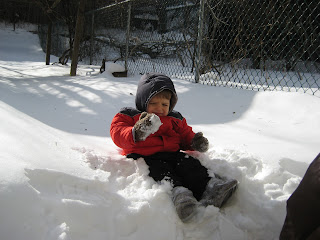 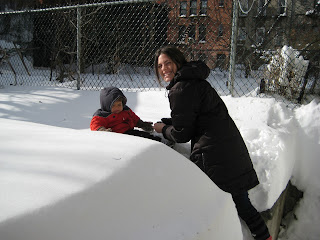 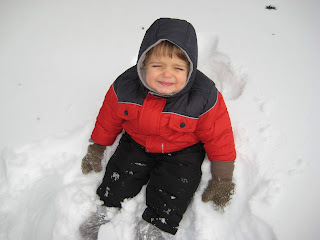 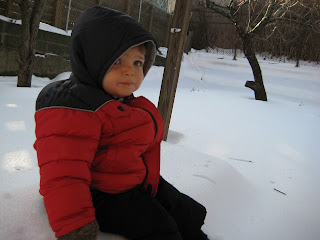 I am very sure how i feel about the snow.  I don't know what's going on in this picture, but I love the dirty look on my face whilst doing a snow angel. My mind hates it, but my body can't help but play in it. I'm a dichotomy. 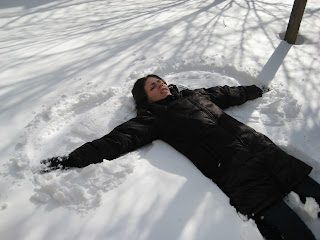 Oh man, what a fatty. Love the snowsuit. 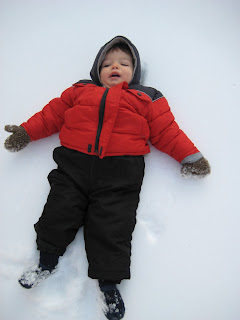 Hey! There we go. 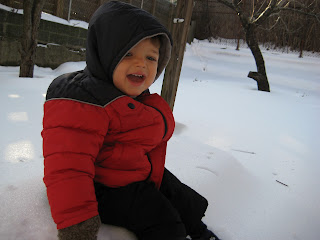 Julian is actually sitting on a bench. 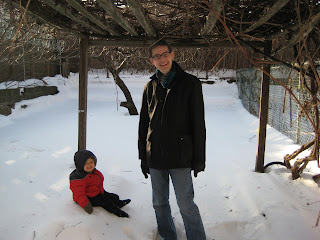 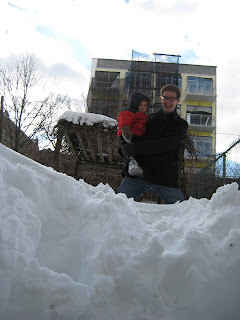 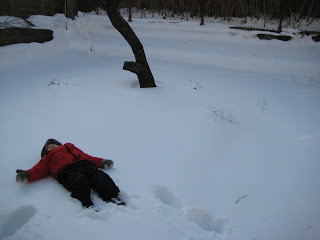 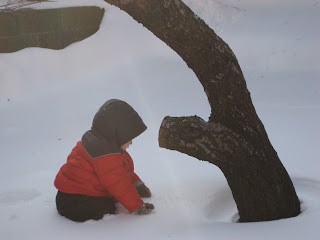 And that's about it. Hope your New Year's was excellent and as the man at the restaurant said to me, "have a great year!"

I was all ready to leave a comment reassuring you that my daughter didn't walk until she was 16 months old, but then I realized that you weren't complaining, just explaining the Jumping T-Rex artwork. So then I still left that comment anyway, ha!

Are those ziploc baggies around Julian's feet? Hahahaha!

So I noticed for some reason that Sean is wearing a watch on his right wrist. Is he left-handed? If so, I need to add him to my Lefty Uprising list. It's... just a friendly club that is not in any way interested in throwing off the shackles of the oppressive righties.

Ha. He is indeed, and I support this cause, as he received a left-handed toothbrush for Christmas (don't be too jealous).

Not ziplock, but freezer bags. Yes I am making a distinction because these are very important and prevalent things in my life. We have no real boots for Julian!! fail. Let's just hope it doesn't snow. EVER. AGAIN.

Thanks Alanna. I'm pretty sure I can go even one more Christmas w/out getting Julian much (or recycling gifts--maybe 2 more? 3?) without him noticing. I'm going to stretch it as long as i can.

Holidays with the Morellos are fraught with the true meaning of Christmas...and FUN - but mostly fun ;) Also stockings with oranges in the toes, a vital component to any Christmas morning. So perfect.

Freezer bags are the obvious choice for burying your kid's feet in ice. Who needs boots?

As to the big snow, it was a blessing... and a curse, but mostly a blessing. Everyone should be forced to brush with a little hotel reject toothbrush from time to time. It made me appreciate my lefty-brush ten fold when i got home.

You and Sean are Host and Hostess with the Mostess. I couldn't have found a better couple to go Kato Kaelin on.