The title makes this sound like a recipe for a fun cookie recipe. Sadly, it's not, but happily, what it IS is a group of funny pictures I've been collecting. I enjoy them. I hope you will too.

1. First up is a flier a friend sent by the sister of a friend of mine. One thing you should know is people in my church are pretty out of control when it comes to themes.  Planning an activity? What's the theme? Now that you have a theme, everything planned or created or devised thereafter MUST RELATE TO THAT THEME.  The religious pun reigns supreme in this culture I am a part of.  And it could be more of a personality trait and should probably be on assessments. "How big are you into themes at parties/events?"
This one just about put me over the edge.  First, they were giving gifts to a large group of people.  This is a tradition and of zero doctrinal import.  But for some the line is fuzzy, and for some, immense pressure is felt. It's a super stressful, silly thing, which is a fun combo. Silly stress. And often by the end, one completely loses sight of the original intent and all sense and meaning is completely gone.  Alright, enough explaining. Here is an example of a silly idea getting away from a person, completely derailing, and results in something weird and awesome. 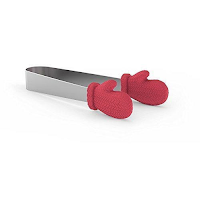 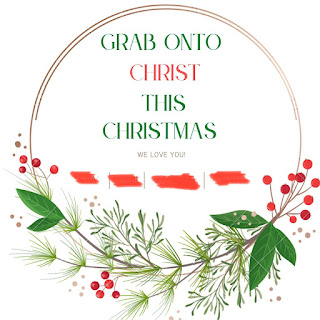 GRAB ONTO CHRIST.  I told this to Sean and he stared at me with a look of such confusion mixed with some horror. He was pretty disturbed.  It is hilarious.  "Grab onto Jesus, but very gingerly because he's scalding hot and can also BURN YOU."    I just like to take the pun that generally goes from object to message-- but then turn it back to the literal object.  It's kind of a hobby.

2. Speaking of recipes, I'm seeing a lot these days. Making a few.  Printing every single one I make because #old.  Printing some I don't make.   This picture is not so much about a recipe but an article with the funniest/scariest headline I didn't even bother clicking on because you'll see. Here it is: 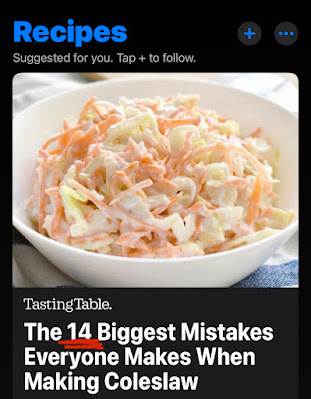 FOURTEEN?? I'm making FOURTEEN mistakes every time I make coleslaw?? WTF?! Why do I even try then?? Apparently I suck at this! I am a freaking coleslaw moron.  Let's break this down:
1. The maximum mistakes I make that I'll allow you to point out at any given times is probably, like, THREE. Give me more than that and I'll just feel so defeated and succumb to my own inadequacy.  Like I can handle only so much ok?! So telling me fourteen is just abusive.
2. It's coleslaw. I have never made a list of things I care the least about but I'm fairly confident coleslaw could rank in the top 10.  Whoever wrote this article cares deeply about coleslaw, knows everything about it, and seized their moment.  It's fine to care about coleslaw. I think Sean, for example, cares marginally more about coleslaw than I do. But even he would be open to learning, say, five mistakes he makes when attempting it.  Love stumbling upon the absurd. It makes my world go 'round.
I just asked Sean his opinion. Here it is: 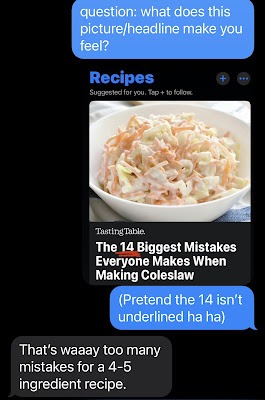 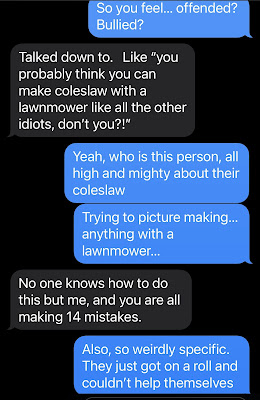 This next picture I snapped at the gym.  I love when things start out with an idea and then take a funny turn. The first few sound good to me. Take deep breaths? yes. Drink glass of water? Definitely, so important.  Stretches to feel good? Absolutely. Believe in that. Take a walk, great. Write down things you're grateful for, sure. 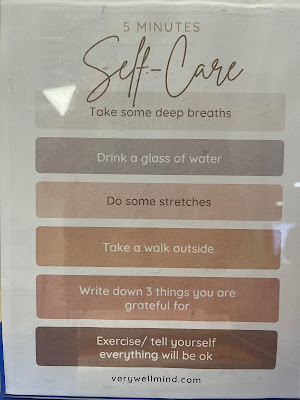 And then the last is like, really important--exercise? Absolutely. But looks like they almost forgot. Like they were like, "oh shoot, shoulda put that one at the top of the list"  And then since they were out of space, gave an additional desperate tip because honestly, we care about each other and this is good advice.  It's just funny with the backslash for some reason.  Also, I am picturing doing both things simultaneously and laughing but also noticing how that sounds like pretty good advice and actually I'm pretty sure I've done those things together multiple times.  So maybe this chart was created 100% intentional as is. I take it back. Great chart. Very thoughtful.
This next pic is not so much funny but rather just kinda gross, but in a festive way? Spotted this hideous little thing whilst on a walk and had to pause.  Vile, yet vibrant.

I was right.
I'm hoping this takes off and becomes the new "duck face" in photos.

Lastly, i love kitty time and kitty photoshoots. But also kitty makes me sneeze something fierce, especially when she's up in my grill, her favorite place. And again-- perfect moment I thought for a lovely portrait of the pair of us.  This is a good depiction of our relationship. 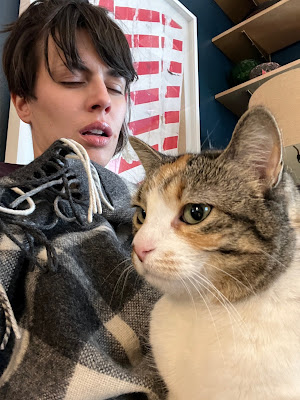 -I love our church, but we are insane sometimes. Thank you for gently poking fun at us without me worrying that you've lost your testimony.

-And coleslaw. I'm not sure I've ever made it (although I do enjoy it, when done the way I like (slightly sweet, because I'm gross)), but now I feel too defeated to even try.

-I have NEVER told myself it's going to be okay while I'm exercising. I tell myself that an hour later as I'm trying to get my kids out the door and stressing about all the things I have to do that day. I have to remind myself that everything is fine, and that all the things I'm doing are happy things that I enjoy and that I do NOT need to stress about them. It's really weird. I don't always understand myself. But I recently developed high blood pressure, and reading this paragraph explains why...

-I went to our city's municipal band concert yesterday afternoon and part of the fun was watching people's faces. You nailed it with flute face. (I can laugh at this because singers pull even WORSE faces! As my Mom would always say, "Singing is not a spectator sport!")

-Not sure how you put up with a cat that makes you sneeze. That's a hard No from Craig. And probably Kendra, too, but she didn't get a choice so it didn't matter.