Merry Christmas to you! We've made it.  And today's post means it's Christmas card time.  This year's was a veritable HOOT.  This project was very Sean-led and I couldn't be more tickled about it all. He is amazing.  He organized the photoshoot, costumes, designed the card, did all the photoshop, of course. I contributed the text with others' input and I laugh every single time I look at it.

In addition to the cards, we have a tradition every year of seeing A Christmas Carol at the nearby community theater.  Pretty much ever since we moved here. I went several times as a child to this same theater too, so, but for some gap decades, it's a long-standing tradition.  This is the first year that Julian has cared about traditions.  Like, if we mentioned not doing something, he would revolt, "Noooo! We have to do that!"  when he's barely shown any interest in years past. It's very surprising. But awesome. Especially because this is one he cares about. This is one Sean deeply cares about, and it's one I care about more and more the older I get.  This story is a treasure and I feel it more acutely with each viewing.

It's been a strange theme of Christmas this year that happened organically.  From the photoshoot to seeing the play we've also seen several depictions including the new Spirited musical with Will Ferrell and Ryan Reynolds, which is bizarre because I am not a huge fan of musicals. But I kinda loved it. Like, I watched it and then watched it again just a couple of days later.  So funny, so catchy dare I say, and also... touching. Pretty powerful. Go see it today. And then, one day we were sitting in the living room talking about it. Julian had been reading the play in his English class and he performed the role of Scrooge (excellent). We talked about how we should read the actual novella one day. And then I randomly looked to the small end table and lo, there it was. A forgotten gift from Julian's 6th grade teacher a year ago, so it had been sitting there all year, untouched. Waiting for this moment.  I grabbed it and began and it has been a weird kind of delight. The old language, references we don't understand, the bits left out of the films and plays, some truly bizarre. But others important to the depiction of Ebeneezer's change of heart.  He often seems to immediately jump on board from soon after Marley's visit, in my opinion. But not in the book. There are odd moments and patient spirits and really painful and powerful discoveries pivotal to his transformation that you really feel. Of course, this is why we're a George C. Scott family. He does a tremendous job.

So, without further ado, Sean's brilliant creation. The three of us in our chosen characters that we felt suited us best, and perhaps the closest I'll ever get to achieving my actor dreams: 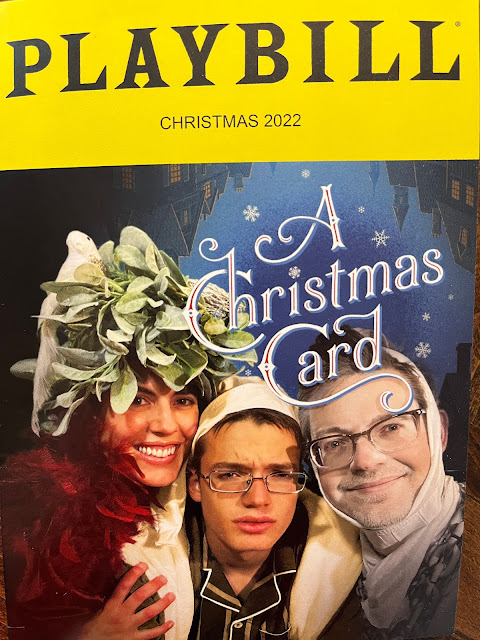 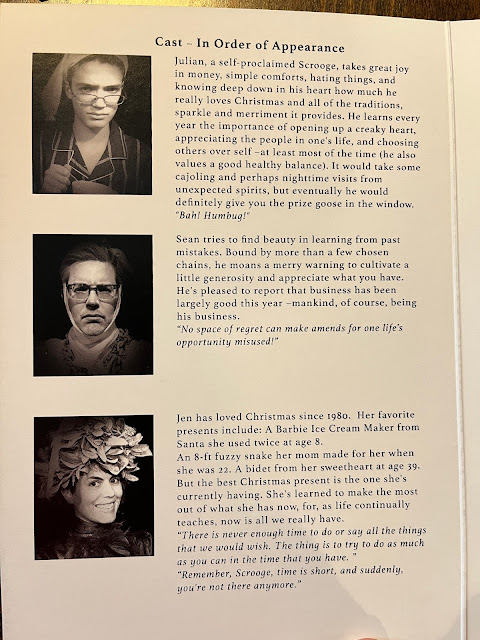 just when you think it's over, the back cover: 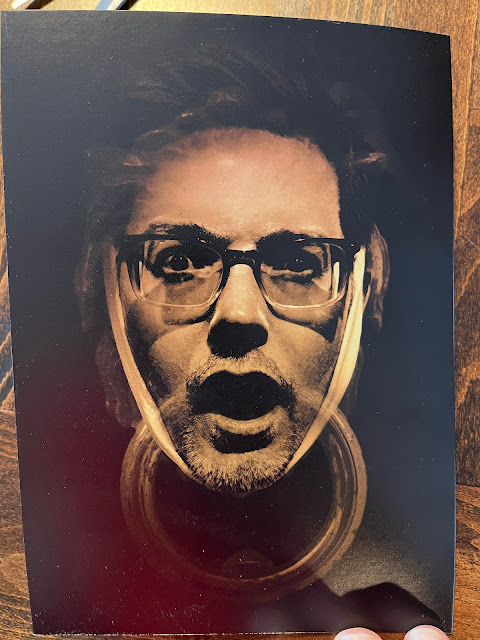 Dyyyiiinngguhhh. Sean! So freaking funny.  One day a neighbor stopped by to drop off some goodies. She commented on the card and mentioned something about congratulating him for being involved. She wondered whose idea it was and Sean said, "It was mine!" and she said, "Oh it was yours! Well, you're a good sport."  Perhaps a bit disbelieving. Like she couldn't process that he'd actually voluntarily, happily head this up, let alone participate.  Which, again, is why Sean is the best.

Truly: GOD BLESS US, EVERYONE.

This. Is. AMAZING. And one of these days I'm going to actually read that little novella.

I didn't manage to see Spirited-- I was hoping to watch it with the whole family, but then I checked IMDB and it clearly wasn't meant for little kids. And then our subscription to Apple TV ran out. But I'll look for it as soon as the 3rd season of Ted Lasso comes out and I resubscribe to Apple!

(AND-- you don't like musicals??? The ADHD diagnosis didn't phase me at all, but this might be a test of our on-line friendship....!)

Generally, no. It has to be just right. I saw "Once" on Broadway and cried my guts out. I loved it so much. But when it's super "show tune-y," my brain dies. We all went to Joseph and the Amazing Technicolor Dream Coat and Julian and I about burst into not good tears at the end when started doing the recap of ALL the songs. "One more time!" Torture. Meanwhile Sean is grinning, happy as a clam. So F- to that one. Also I think I just have music fatigue as I'm also very sensitive. So the songs really have to, you know, strike the right chord. ;)