Cathedral of the Madeleine

I recently forced everyone to go to the Cathedral of the Madeleine in SLC for the children's choir concert. Sean is easily persuaded and Julian... less so.  But with pockets full of peppermints and pretzels, we went and it was great.  My mind is always burdened these days. Sometimes with boring things like lists of things to do but mostly just with the weight and woes of the weary world.  I need rejoicing, and sitting in holy places, even on hard benches with laminated sheets of printed prayers that are both lovely and a bit of a bummer, is probably not the worst way to find it. And then the children start to sing, and you know that, at least for an hour, everything's gonna be ok.

They sang many songs. Some were recognizable yet still lesser known Christmas songs like The Wexford Carol and Il Est Ne which, incidentally, I think might be my style of Christmas tunes. Still, Still, Still. Lo, How a Rose E'er Blooming. Bring a Torch, Jeanette, Isabella-- all a part of the program. Others were in latin and glorious, reminding me of my, like, 8-disc compilation of music across the ages for my college humanities classes. Is there anything better than a cathedral choir? I am not sure.

Some of the songs had a harpist to accompany, others the magnificent organ that takes up the entire back wall on the upper level.  Most were a'cappella. The children were a mixed group ranging in age from 8-15. I really appreciate kids who can harmonize. A few had solo parts and one in particular just had me transfixed. She was so good. She nailed the high angel-tier range of that pure, transcendent cathedral angel voice. Where, opposite of ears bleeding, they are dipped in gold. (And then you get to take them home with you as a metaphorical souvenir-- a memory cast.)

At the end, the audience joined in on four songs and I got the full acoustical experience I had been hoping for, the kind where you can't hear your own voice but know you sound amazing.  Our bums were super sore from the hard benches but for a respite, our spirits were lifted and and held. 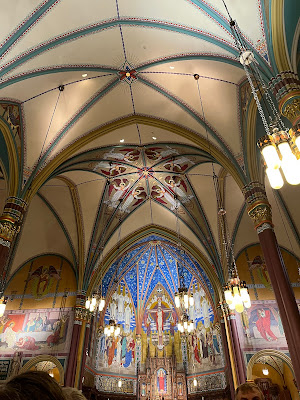 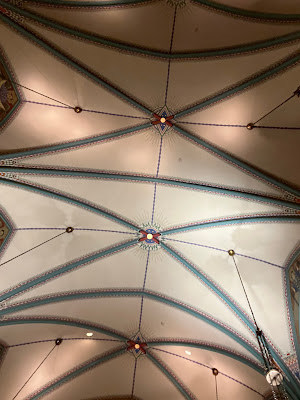 When I first got to BYU I did a week long late summer honor's course, and they brought us here as a field trip! I love visiting churches and I LOVE choral music echoing all around inside them even more! Way to have an awesome, uplifting experience! Julian's grumpy face cracks me up!