My mom and I share a love of cats.  Some people learn this love. For others, it is inherent. The latter is true for the both of us.  When we were young, my sister and I went to some kind of pottery class. We had been dropped off and noticed afterward a box of free kittens. We discussed our desire to have one, not really considering the risks of taking one but pretending to.  Enboldened by the "free" aspect, my sister just did it.   We brought home a cat without asking permission first.  I admired and supported her. This was a first lesson in "don't ask permission, ask for forgiveness" but not having to because no one can resist a cat. No one with a real beating heart anyway.  This set us on a roller coaster journey of cat acquiring, burying, mis-gendering, birth-witnessing, bottle-feeding when their mother died, and loving. And my mom was there behind the scenes taking them to get shots, making beds for postpartum feline families, somehow knowing the intimate goings-on in a cat's life. In short: being aware of their needs in a way we clueless kids never were.

One year she took me aside and, out of the corner of her mouth, discretely commissioned me to "bring home a cat if you find one."  She could never do it herself apparently, as my dad was never a fan. But if it just "appeared" one day, how could he not allow it? How could she not take care of it? Is she a monster? Is that who he thinks he's married to? A monster?   Well, I did it.  I was driving one day and saw that irresistibly fateful sign--"free kittens."  These kittens were baaarely of age. In fact, it took a while to get the one I chose to eat. I remember sitting on the kitchen floor dripping drops of milk into her mouth from my fingertip, desperate for her to ingest something.  That kitty became mine and we all loved her until she died the week of my wedding and no one told me because they didn't want me to be upset. I found out though, and I cried, because that's what you do when beloved cats die.  Even when you're getting married. It's the circle of life.

My dad is not entirely unfeeling.  In fact, when another cat suddenly "appeared" on the lawn in a box with some cans of cat food (it actually did. I took no part in this. Not saying I wouldn't though), and my mom took it in--not indoors, but in her heart--and let her live on their land and fed her and watched so other animals wouldn't eat her food. When all this happened and he saw my mom worry over her in winter, he got an electric cat bed to keep in a window well for her so she would be warm (the cat, not my mom, who was always welcome indoors). In fact, several cat beds were made/constructed over the years, I believe.  We never knew who dropped off the cat in a box but they definitely knew what they were doing when they chose my mom's lawn.

This cat has been around since before Julian was born. We never really knew its name. Sometimes she was a cuddler, sometimes she was a tiger, living in the wild, gone for days at a time.  A few days ago my mom texted me: 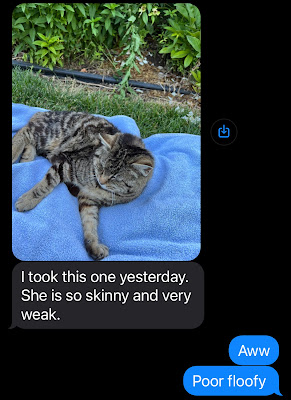 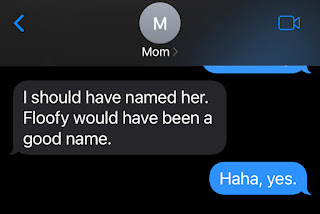 And then two days later: 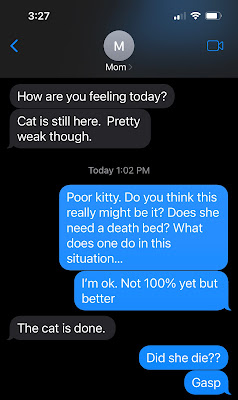 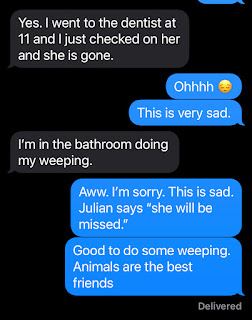 Because that is what you do when a beloved cat--friend-- dies.  Rest now, kitty cat.  I don't know when you were born or showed up in that box, but you died June 29, 2022.  If anyone sees any "free kittens" signs... let me know?
p.s. She sent this a few days later. My mother is the best. 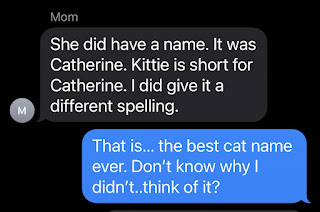 What a look back in time and a sweet tribute to cats and to Mom. I don't remember bringing home that cat, though! It was me???

Yes. We both wanted it, but you pulled the trigger and just went for it.