T'was my birthday recently.  Life is such that I kept forgetting about it as it was not in the forefront of my mind.  Many other things were getting in the way of my attention and taking up every bit of brain space I had (and more!).  It's sad and lame that people care less about their birthdays as they get older. Life gets in the way of caring, I guess.  But I couldn't let that happen.  And I always like celebrating, for whatever reason.  So at the last minute I finally made a plan. I decided I'd go on a solo hike. And then I thought, I am fun, but a friend would be better, and happily I was able to find one.  We hiked to the hot pools and it was a good 5-6 hr excursion. We hiked, we soaked, and we talked and talked and talked.  I keep reading things that say socializing while in nature is basically the best thing you can do, the best kind of therapy and guess what, it's true.  I was cured of everything after that.  ALL of my problems.  Here is a pic of me mid-healing and Lora, my soon-to-be moving away friend. Isn't that always how it goes. 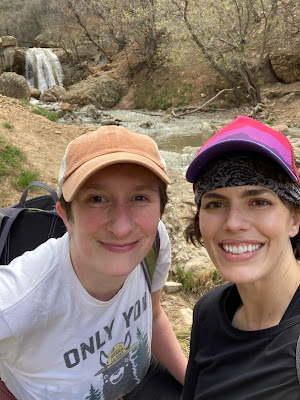 The afternoon was filled with friends and well-wishers and a mailbox full of cards.  What treasures.  I loved it all. People are the best.

One friend brought a gift and a bunch of balloons. I held the balloons while we chatted and Sean laughed to come down to find me like this and I realized this is just the kind of thing I want to do. Hold on to balloons and just sit in my birthday.  It was great and might be an idea I borrow.  "Happy birthday. And here are your balloons to hold. Now just be in it. Be in your birthday."

Newsflash: Sean is the greatest human.   Why? Exhibit A: This birthday sign.  First, I just love his style. People who care noticed the precision of his writing, saying it looked like a font. "Yeah. It's Sean font," I explain.
Second, JENSDAY. Took me a good minute to realize it was a play on WEDNESDAY, which was the day my bday landed on. *brain explosion* I know.  SEAN!  Why does he know me so well. Why does he know that birthday/name puns are my exact love language.  He said he considered JEDNESDAY which would have also been acceptable.
After a dinner of Thai food (the perfect birthday food) presents appeared and they were all amazing. Here are a few of them.
1- A typewriter. *every single heart emoji, even the poo-brown one* Apparently you can buy newly made but old-looking Royals and she and I already have a deep and meaningful relationship going.
2- A bowl.  This bowl is beautiful and this is why.  Sean and I shared a casual, passing conversation some time ago about how we needed a bowl.  It went something like this:

SEAN: We should get a bowl here. I liked that bowl we were using [to hold some stuff].
JEN: Yeah, a pretty bowl would be good.
SEAN: Yes.

And he bought one and gifted it to me. A vintage, pretty blue bowl. Somehow I feel like this is a symbol of our life and relationship.  We share a space and existence and we both seek after pretty things that are mutually-pleasing. He cares, and I care. I think about it, and he thinks those thoughts too. And he did the work to find one and then gave it to me. And then I loved it.
3- This rolling shelf. I have so many craft supplies and nowhere to put them. I often pull out the things I want and leave a big heap on the table for days. And nothing really had a good place.  Until now.  Sean bought two of these: 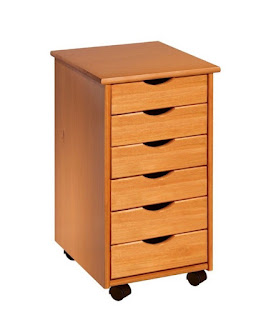 And turned them into this:
You never really know what kinds of things will make you swoon. That's like 95% of the gift right there.
He also hand-makes cards and forces Julian to be in on it as well. 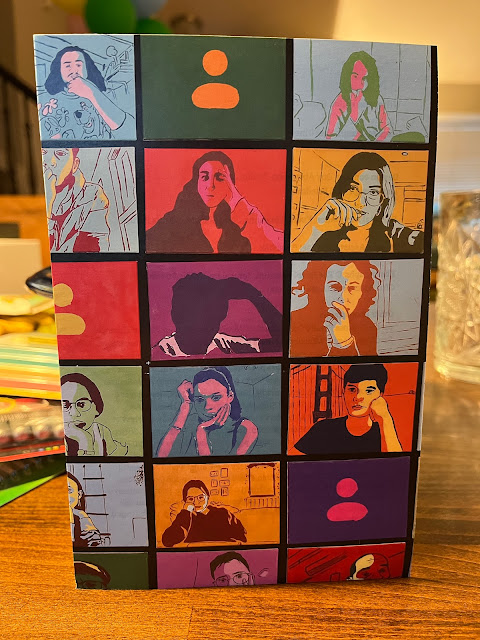 Including the message because I want it documented as the greatest birthday card message known to man.
Julian's card: 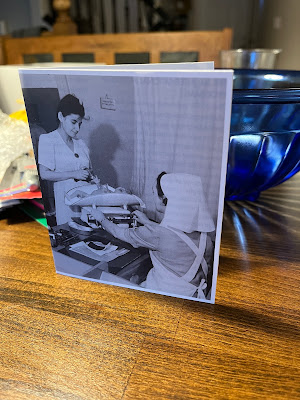 He also bought a cake from a company that ships them from NY.  It was... maybe... the best cake of my life? Would be fair to say? We still talk about it.
"I miss the cake."
"Me too."
It was called a Burnt Basque cheesecake, aka a cake from another planet. It was a frigging culinary miracle which we witnessed and then devoured.  Sean told me the background of how it came to be but I forgot it. It was cool though. We decided it was like a molten cheesecake.  Crusty top, cheesecake inside, with a pudding-y soft melty cheesecake center(???) I miss it so much.

Lastly, pictures of our tulips that we planted at the very last second last fall. It's fun when you plant things and then completely forget what you did so you get to surprise yourself: 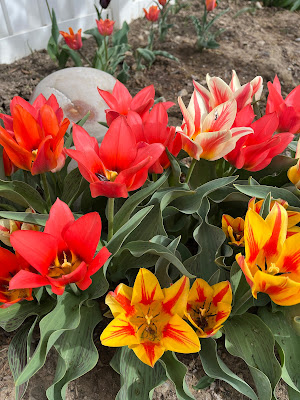 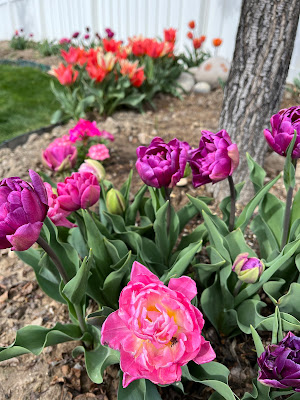 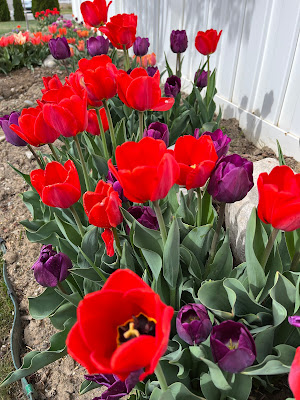 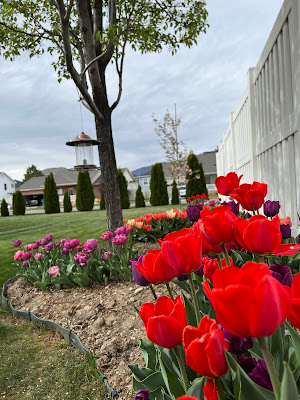