In an episode of Parks and Recreation, a show you should have binge-watched several times over by now, Leslie Knope creates an online dating profile on Hoosiermate and incidentally ends up matching with her co-worker Tom Haverford, which is preposterous.  It's a hilarious episode where Leslie actually tries to date Tom, unbeknownst to him, and they try to figure out how they could possibly be a match when really they are the opposite. Here's the dialogue:

Ha ha. Makes me want to watch it again.  But then I looked around my front room and realized I am collecting globes as well, which I am not ashamed of in the least.  Let us examine:

1. Tiny globe. This globe is cute and sits on a bookshelf. We refer to it often. 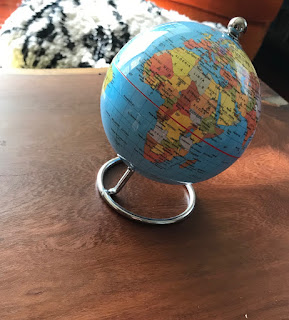 I should have put my hand out for scale.  It's small.

2. Here's a globe stress ball we keep on the piano for obvious reasons. 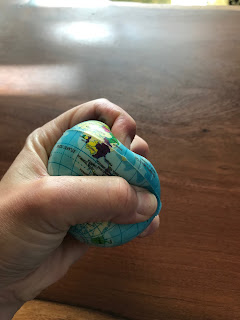 We refer to it as well for our geographical needs and also stress release. It is very useful.

3. Not really globes I guess, unless you're a flat earth-er. We acquired these erasers from somewhere and I liked that one of them doesn't have North America on it. At first glance I was like, what in the hey is this? And that was a good lesson for me. 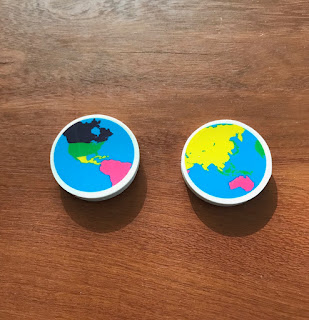 4. Next, we have another globe stress ball. (Can't have enough. Globes or stress balls)   I was looking at it one day, spinning it around.... 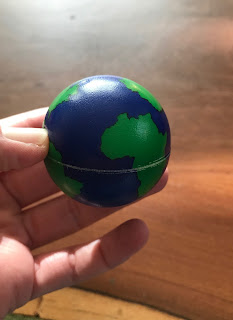 ...until I realized something was very, very wrong. It took me a second but-- where is Europe?? 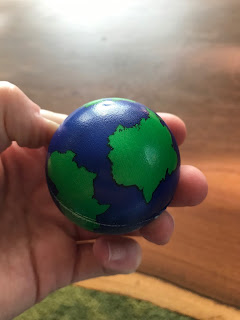 Aaaahhh! It's totally gone! And no Arabian Peninsula, either! We see the curve of Iran and then it just cuts everything off west of Russia.  Have you ever seen anything so frightening? This was extremely unnerving for me. So disturbed. Why? Why is it gone? It's a cheaply-made stress ball/globe but even so, you can't just leave out peninsulas and continents willy nilly. Someone's going to notice.  It made me think of stories and movies about dystopian societies, and I shuddered and did a few squeezes to get over the stress.

And those are my globes. Weirdly, I do not have a regular-sized globe which seems a tragedy. I love them though and go to them whenever I see them. I'd love a good-sized relief globe. In my ultimate globe fantasy, I'd have one of those huge ones that stands on the ground and it would be in the center of a designated room--The Globe Room, it would be called, where I stored all my globes. Global Office?  Anyway, and I'd sit there and look at it and spin it wildly, just like I did with my family's globe as a kid. I just took a minute to browse images of "floor globe big" on google and I suggest you do the same. So many cool globes.

I do need to get us a globe. We had one growing up, and I really liked it.

My favorite globe anecdote was once at work. I was talking to a female coworker who had a couple globes at her desk. Our director walked up and said, "Nice globes." Then we all realized the unintentional double entendre and laughed. Good times.

If kids don't grow up with maps, well... you know what happens.
NICE GLOBES!! ha ha ha, that is good stuff.