First, let me begin by saying, GAAH.  Doing some serious head-shakery at myself right now and my plan is to share this embarrassment with you so that you don't make the same mistakes. Not that you or anyone would because... seriously. How.    Let's begin.

Both of these occurrences took place within the last couple of weeks.  Some time ago, we were in California for a beach trip.  Beach therapy is important for all three of us and we mixed it up a little this year by staying in a little rental unit right on the beach.  It was so fun and so nice to have all our stuff nearby so we didn't have to haul the universe wherever we went and were free to come and go as we pleased.  Also we had a kitchen which was great for obvious reasons.

The first morning there, I was attempting to open a tub of yogurt.  Not an individual-sized one, but a TJ's greek yogurt tub that looks like this:


I really love including pictures that make the story only marginally more interesting. Aren't you so happy you have a visual now though?

So typically with containers like this, for the initial opening,  you have to lift the plastic lid off bit by bit, right.  Snap, snap, snap, snap, all the way around the lid until it's all free.  I find this cumbersome, for some reason, so I tried to be slick about it and create a shortcut for myself.  MISTAKE.  Don't do this. Just do it the long way! I slid my fingers around the edge hoping to release the plastic in one swift circular motion but what I ended up doing was give myself a really deep PLASTIC CUT.  I'm sorry, did I say paper cut? No I didn't, I said PLASTIC. Ugh. It was deep, at an angle, and bled a lot. So I wrapped a bandaid around it and had that annoyance with me for the entirety of the trip.  Actually, I have to pause and say it was not a band-aid but this: I think I've mentioned my love of these before but they're worth mentioning again. They are my savior when I need a band-aid.  Band-aid may have invented the term, but these bandages are the new definition in my life.

Later that day, I changed the bandage and examined my cut on my white wrinkly dead-looking fingertip.  I saw it was really deep which surprised me and grossed me out a little bit.  The next day I was changing it again and about to show Sean how deep it was when I realized it had already begun to heal itself closed and once again I cheered the benefits of keeping band-aids on wounds, that they heal a million times faster.  So go home and tell your mom who told you it's better to "let it breathe," and say, "you're dead wrong, Mom."  This is the one single thing my mom ever taught me that has turned out to be false.

Fast forward to a few days after returning from our glorious trip. Band-aid still on my finger, I went to open another new container of yogurt and what? In the words of Britney Spears but much more angry a lot less sexy, OOPS, I DID IT AGAIN.  LIKE AN IDIOT.  Surprisingly sharp, the edge of the plastic lid really slices quite cleanly, which could be a factor in the quick healing.   But man, so frustrating.  I may have hollered, "Are ya kiddin' me? JEN."  And shook my bandaged fist in front of my face. Here they are, like two stupid peas in a pod, the two most important fingers on the hand, damaged by foolishness: 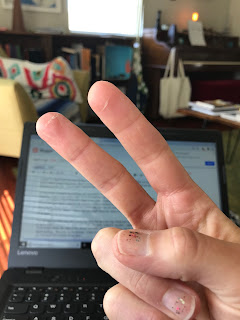 So if you're wondering if you should open a container that way, my advice is no, you should not. Don't do that.

The second event took place during a mealtime clean-up.  I took a hot pan and placed it in the sink. Then, I was so speedy and apparently absorbed in washing the other dishes that when I got to washing the pan, I had forgotten I had removed it from a hot stove only moments ago and began washing it. Fortunately I didn't grab it directly or anything but I felt the heat through the sponge perhaps and maybe got dangerously close to bare skin and I yelped, "Still-hot pan AAH!"   As I was in mid-head shake at myself for being so forgetful and batty, not a single minute passed before I went to wipe the glass top stove and-- "AAH, STILL-HOT STOVE!"   Like, DUH.  DUH.  Again, fortunately there were no injuries thanks to my thin, damp paper towel but geeeeez.   It's moments like this when I just stop and stare at Sean, disgusted at myself, because there are no words.

That's it, those are the recent lessons learned in my life.  Hopefully it'll help you and perhaps pop in your mind when you threaten a special kind of idiocy like mine.