This summer I attended my 20th high school reunion, a statement that boggles the mind. Whaaat? Twenty years? How? When? Who? How?   It's crazy, just crazy.

But it's true, I graduated in 1998, got married in 2003, had a kid in 2009, and here we are today.  One of the weird things about moving back to my hometown after a decade+ of being away is sudddenly seeing people I recognize from another life I lived, long ago.  Moving out of state right after getting married is probably one of the best things I've done. I learned how to be an adult ('ish) and had to develop skills I needed since I was in a brand new and extremely foreign land and knew no one.  That decade shaped so much of who I am and I'll be forever grateful.

But I'm unaccustomed to seeing people from my past and when I do it's a little bit jarring.  Mostly it's people I had little interaction with and I wonder what I could possibly say to them.  "Hey! I think we had a math class together. How ya been?"    So it's been weird, and interesting.

It's such a crazy thing to see people from the past, though. People you haven't thought about in years.  In a way, I have kind of this intense fondness for anyone from my childhood, even if we didn't know each other well.  There's a sort of shared trauma quality about it, particularly the jr. high- high school years. And that creates a bond that can never be broken, because it's kind of like, you were there.  You know.  These people hold a part of your childhood, I feel.  But then you add those weird old feelings that seem to surface for some odd reason of how you used to feel about a person, the memories you have of them, how that person seemed to make you feel, etc.   And you have to decide how much weight you want that to have. I mean, it's been twenty years. We've all done a lot of life livin'.  But still.

I decided to go with my best pal Brooke and see all the people.  We went, we talked, we reminisced.  I also brought Sean who actually wanted to go because he's never been to anything like this and later remarked it was the most unusual experience.  I told him I could use him as a way to talk to people and be like, "Hey, Sean, this is ____.  The memory I have of this person is ______" and then just share it, whatever it is.  For example, one girl was there who I hadn't seen since 2nd grade but we were pals then and I think she came to my 8th birthday party. When I saw her we greeted one another and I said, "isn't this weird? The kind of random memories we have of each other? Like right now the thing that's popping in my head is.. didn't you have like this cool sweater or backpack that you could stick things to?"  And she said, "Yes! My mom gave me this sweater and it came with a pouch of felt little objects that you could velcro onto it!"  "Yes! That thing was AMAZING. Everyone was so jealous."  Ha ha ha! It's so weird!  Like all of a sudden I'm 8 again and that never really went away (something I've long suspected). We didn't catch up on each other's lives because we hadn't kept in touch since then but it feels good to share these weird connections with people who knew you way back when.  We had a moment, and it's a part of me and maybe a part of you too. It's a kind of reminder or reminiscence of who you were, who you are.

I also ran into a friend who i was buddies with at that same age and then she moved away. She moved back at around high school time when we picked right back up being friends.  Then we lost touch after graduation and i hadn't talked to her until this reunion and we picked right back up AGAIN.  So crazy! She is just as funny as I remember and, just like now, that was a quality i always looked for in my friends even at the tender ages.

We all concluded that, in spite of the years and life lived, kids had, divorces, etc, no one's really changed that much.  We're all the same person and I suspect, forever will be.  This is comforting, and it made for such a fun nostalgic night being back in a high school I went to for only a year (it was brand new).  Here are a few pics: 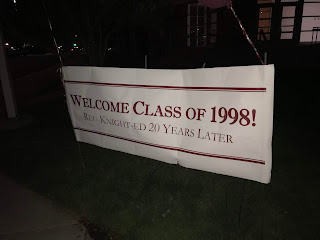 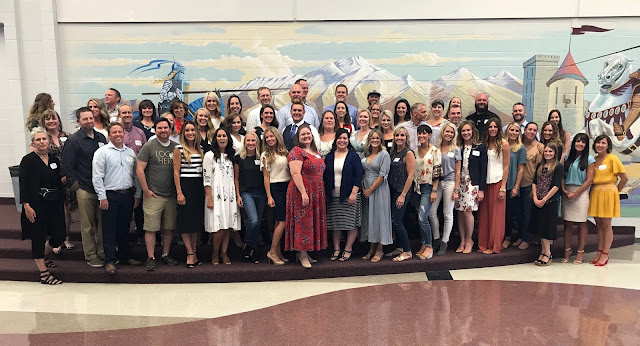 Several of the same peeps: I found a picture of an elementary school Christmas program and sent this to Mary: 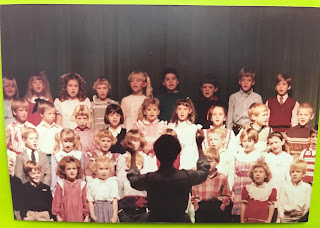 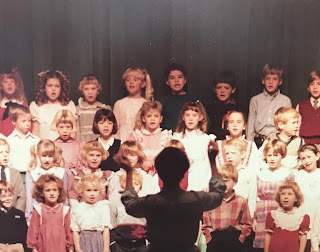 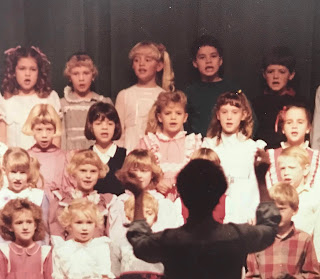 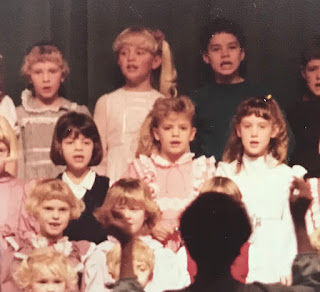 We walked around the school trying to dig up memories from so long ago, having been there for so short a time. "Was that always like that?? i swear i don't remember that."   But Brooke was right, it was the PERFECT place for a photo shoot. I'm considering using it for our next Christmas card.  Or maybe I'll just have this photo be my Christmas card bc it's sooo good.


I wanted to run through the halls of my high school, so I did.

I'm a little disappointed that you didn't recreate the original pose in the Amy, Brooke, and Jen photo. Oh well.

My 20-year reunion was last month, but we had just driven down a couple weeks earlier for family stuff, and I knew none of my good friends would be there. But I did kind of want to go. It would have been fun.

I know- with the shirts, as well.

I think it’s definitely an experience unlike any other. A lot of feels going on, that’s for sure.