One time, some days ago, Julian brought home a drawing he'd done in school. It was hard to tell, but he told me it was Bowser. Julian plays a few variations of mario games and has become familiar and, naturally, is inclined toward Bowser the bad guy.  Except there's one game he plays where he always chooses to be Peach and it makes me soooo happy.  Still hanging onto the belief that women and men are actually equals, and that men aren't the standard default in everything, something that is taught in nearly all aspects of life.

But anyway, the drawing was out on the table, and Sean happened upon it, and when that happens, well you know something's going to happen. First, Sean inquired about Julian's interesting Santa picture. Julian corrected him saying it was NOT Santa, but Bowser. Refusing to accept this, Sean insisted he saw Santa and set out to make it into Santa, darnit.

I wish I'd taken a before picture but here's the after and it's sooo funny and strange.  I love it, quite a bit. 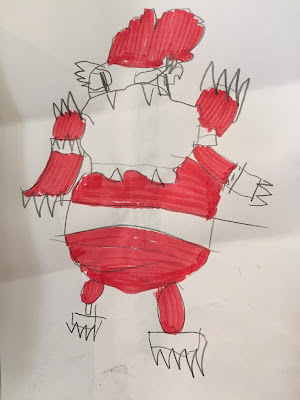