Mew of the Wild

We got our cat two Christmases ago after a gross misunderstanding on Santa's part. Apparently Julian asked for a STUFFED cat, for me.  But we got a real one instead. Julian reminds us every day of his own importance by bringing up the fact that without him, we never would have gotten a cat.

Every morning I wake up and take about ten minutes pulling myself out of bed.  The first thing I do when I go downstairs is unlock the cat door to let in the Poo and feed him.  Then he spends several minutes yearning for my attention and running around wildly.  Something that makes me laugh about him is his need to be wild but not understanding that himself.  He'll attack things, behave in a general frantic manner, then mew like a baby like he doesn't know what came over him.  Often i'll go open the door and let him outside. Sometimes he goes and sometimes he's not ready, only to be ready mere minutes later after which he darts out like a feline firecracker, ready to attack face a new day.

He used to come and go as he pleased, day or night, but we realized he's a bit of a fighter and would come home with atrocious injuries that we didn't know how to nurse but had to still deal with.  Plus on the weekends he'd wake us up waaaay too early with his impatient mewling that sounds a LOT like "hello?? hello??"  I wish I could record it; it's totally crazy.   So now we keep him in the garage at night, with a heated cat bed, and all our problems are solved.

The new routine is, after his morning meal, he goes out at around 7:15-7:30.  He then spends about 5-6 hours outside and then returns home around noon or 1pm.  This happens pretty regularly.  I've documented it pretty carefully (JK, but still it is interesting to monitor the cat habits. Catbits? [No].) and it always makes me laugh when he returns from the wild, still retaining some of that wildness but not sure what to do with it.  Confused, he mews/yowls at me for no apparent reason, then darts around attacking nothing. And then he calms down.  It reminds me of his kitten days when he'd dart around the house-- running at full speed upstairs to one corner, then back down to where we were on the couch, tap Sean on the forehead or chest to assert his dominance, then dart back up.  {shrug shoulders emoji}  I tell ya, this cat.

I've decided to officially name him Poo, by the way.  I already call him Pooper. Julian rejects this name but I don't care, it's perfect. Plus my mom had a cat named Poo when she was young so it's also as tribute.   This post is so boring and pointless but I love him so much that I don't even care. 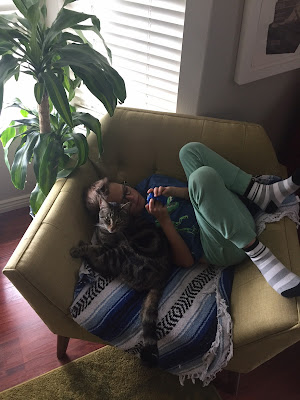 Remember how the internet is half cat videos? The collection won't be complete until YOU add a video of this cat saying "hello." The world needs to hear it!

We also do the garage thing, and it works great. With one of ours in particular, if we don't lock her in at sunset she will be gone all night. That one has also started drinking from the tub faucet when we turn it on a trickle. I love that.

I have seriously been considering the purchase of a collar that has a GPS tracker in it, to see where the cats go all day. It could also help when I want to lock them in but can't find them.