This year I fell victim to the siren song of Groupon and purchased a string of lights. It was called a curtain, where it's several long strings dangling from the same horizontal string.  We didn't know where to put at it at first. Outside? Just by itself? inside behind the tree? We tried that but it didn't work so well.  So then Sean strung it up on a wall where it fit perfectly. There are several different modes to choose from, from a gentle fade in and out, to seizure-inducing flashing. It is the best. I asked Sean what his fave thing about Christmas was this year and he said the wall light.  Me, I said the together time we share every night at the tree, talking about important things. But when I heard his answer i wanted to change mine because he's right, it is the BEST. 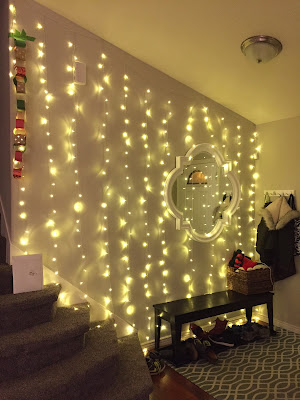 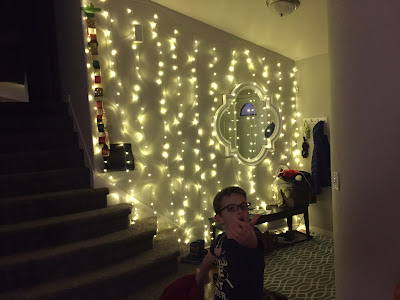 Light the wall, everyone.

Is this meant to be said in the "god bless us evetyone" cadence? 😆