Today's been the kind of day where clouds blanket the sky, yet the sun still somehow shines.  Like everything is under a giant spotlight.  It's cold and fall'ish and things are starting to creep out like Halloween décor and pumpkins and cider-scented candles. The trees are just making their debut (or grand finale?) The grass is still green, though, and my beautiful roses, my babies, are still hanging on like the champs they are, for though the frozen nights treat them terribly, the afternoon sun, which they directly receive, is a bit more kind. But every day I look at them and ask myself, for how long?   (I've recently learned my favorite flower is the rose. I always thought I'd go for something unusual and exotic but I guess there's a reason why they're the clichéd fave. I love them so much)

Watching the earth slowly pass away gives me mixed feelings. I'm eager for change, but I kind of feel like I need to be paying my respects.  Fortunately fall is a spectacle so reverence turns to celebration, which I can get behind.

The other day Julian sat across the table from me and said this:

"Mom, now tell the truth: Is the tooth fairy not real? And instead it's YOU who leaves the money?"

I stared at him with thoughts of, hey, he's got to know sometime. Is now the time? Is 8 old enough? too old?  Also thinking that belief in the tooth fairy nowhere compares to that of Santa Claus (one that is still mightily held to, I might add) I mean, it's just the tooth fairy, right?  I replied, "do you REALLY want to know?"

Me, still hesitating, "Well then yes. It is."

I sat staring at him and just for a split second-- if I'd blinked i'd have missed it-- I saw his face fall, and I realized that both of us reluctantly stood at the precipice of uncertain desires.   Did he really want to know? Did I really want to tell him? Even if he did sincerely want to know the truth, ought I give it to him? Or should I wait? Unwilling to accept, he asked again,

"Really? Are you for real? Tell the TRUTH."

Me, again, "do you REALLY want to know? For real?"

He said again, the tiiiniest fraction less sure,  "Yes, I really do."

And I saw that look again, an internal debate of whether or not he was prepared to reconcile this information with the things he knew and held to deep inside.  Yet again, he questioned,

Not sure I had it in me to go it a third time I quietly asked again, "Julian, are you sure you want to know?"

And my heart broke a little bit and I wanted to take back any notion of thought I'd ever had about growing up and facing reality or speaking plainly or anything of the kind.  As I sat surveying the situation, watching him clinging still to childhood I asked myself, but for how long. Finally I decided to say to him, "I've never seen the tooth fairy, have you?"   He said he hadn't.  I said, "But it doesn't mean the tooth fairy isn't real. Right?" He agreed.

I feel like kids and parents eventually reach this "don't ask don't tell" point in their relationship. That maybe there's this in-between phase where maybe they no longer quite believe in a weird little fairy that collects children's teeth (ew, why is this a thing), but they believe in something. Something not quite equating their hope that their mom or dad will remember to dig up some change for them. I'm remembering how my sister, who's the youngest, would tell my mom she'd lost a tooth and my mom saying, "ok, go find some change in my purse."  Something tells me that's not quite the same, so no wonder they cling. They and us.

And that's where we left it. One last breath of hope hanging in the air, his childhood hung

in the balance, perched precariously at the edge of a cliff but for how long? At this point, who knows what one good gust might do.


p.s. I was looking through his first grade binder where I kept all the jewels from the year and found this, with my commentary at the bottom: 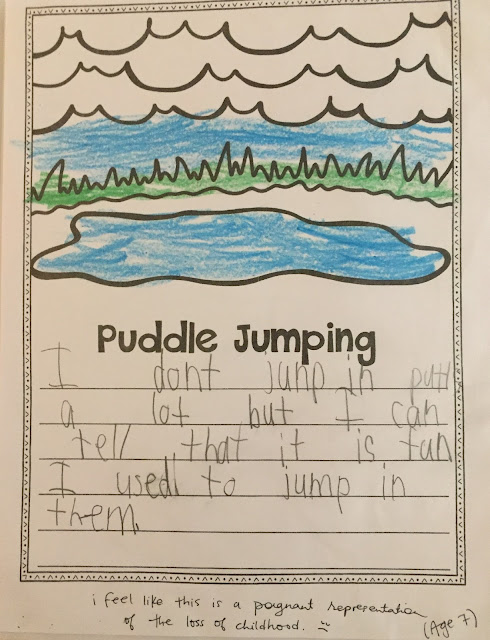 I always felt like fall in Utah was a big disappointment. The heat clung for way too long before suddenly turning frigid, and it left a lot of trees in the valley confused, never changing color. But in Idaho fall is the most beautiful season. The trees change early and it's a very gradual transformation of the landscape that lets you savor it.

Mission anecdote: In Korea they were super proud of having FOUR seasons. It bugged me, so I used to tell people that in my hometown we had five, the fifth being called Dave,

I've heard this anecdote before. 😄 Why did it bug you??
And I bet the fall is insane in ID. I've visited it a bunch since moving here and die at the beauty every time. Idaho beauty > Utah's

I think it was just that they felt they had something exclusive, when pretty much every temperate place on the planet has fall.

As for the tooth fairy, I was never going in for that and never had my kids believe it. We'll do a little something occasionally, but the kids know it's us. I was also against lying to my kids about Santa, but I was overruled. Sam figured that out on his own by last year, which made the conversation pretty easy. Not sure how the rest of the kids will take it.