My mom has a little statue of Santa Claus kneeling down at the baby Jesus. I remember looking at it and being a little confused with my feelings toward Santa and those toward Jesus. I think I believed in some kind of magic when I was a kid (that sentence is super depressing) but not necessarily a human man who actually delivered toys. I know it never excited me to see a Santa at the mall or anything. But I remember not knowing for sure just where the presents came from.

Julian, on the other hand, DOES believe in a Santa figure, though he doesn't care about any mall Santas either.  One Christmas Eve when he was probably three, we rang giant jingle bells outside his window and he heard them and I feel like in that moment, he truly believed.  I don't really know why I perpetuated it since I have some ambivalence toward Santa. But maybe last year's letters to Santa changed my feelings on the matter. I think it teaches a kind of faith that a kid can understand and, frankly, get super excited about. It's silly and frivolous and eventually may be shattered when they discover the truth {nervous teeth emoji} but there is good there. Maybe magic and faith aren't so different.

Yesterday we had a Christmas party with the neighbs. It was delightful and though all three of us, actually, aren't big crowd people, we did our best to festively chat with everyone and it was great to get to know people better.  A woman next door brought her grown daughter who is mentally handicapped and so wonderfully childlike in the best ways possible. I absolutely love talking with her because there is no pretense, no judgment, no guile. I always walk away from her feeling happy. She is a tender heart who jokes and fiercely loves the things she loves, things I most definitely can get behind. Her mother told me they take a yearly trip to Las Vegas to see a certain Santa at a certain mall because one year, they stopped to visit him there and had an experience. Santa attentively asked this daughter questions and her mother watched as she shared a special moment with him. She tried to take their picture but one of the workers prohibited it.  Afterward, having left, they walked outside and passed Santa who had just stepped outside. He then said loudly, "Just taking a little break! If anyone wanted to take a picture with me, that would be fine!" and it was then that this mother knew this was the Real Santa.  So, though there isn't much else for them to do on these trips to Vegas, they go down to visit him every year.

Some people may say it's sacrilegious to put so much emphasis on what might be adversely called a pagan symbol. But in spite of varying beliefs or attitudes, one doesn't have to completely extract the religion from a thing if one chooses not to. Let us allow for some overlap, especially when it involves things that truly matter like love, kindness, and giving freely to others. And not get upset that Sean, quite pleased with himself, drew over this picture. He stuck it in a Christmas book and it makes him chuckle to himself every year. 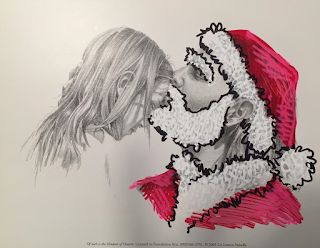