Some-odd weekends ago, a lot happened. And I was like, I've taken a lot of random weird pictures of these weekend events. How's about I blog about them.  And then time passed, days passed, I actually did get it all ready and then somehow none of my work was saved which was disheartening, so I abandoned it.  Anyway, what i'm trying to say is this all happened a number of weekends ago and I have long since lost track of which one. But the events were real, they happened. And they're nonetheless important and necessitate documentation.

First: I went to a Jazz game with Brooke.  Brooke scored some sweet tickets at work.  Brooke is always winning things.  She used to call in to radio shows and ALWAYS win the prize.  Once in Jr. High there was a drawing and who won out of the whole school? BROOKE.  Anyway, it's crazy. I need her to buy me a lottery ticket. We were on row 15 which was pretty fun. On the way there we had to hurry up and get into basketball.  Back in the day, we were super into it.   We could not name one player now but in the car Brooke said, "Now, who's on the team? Stockton? Malone? B. Russ? Ostertaag? Jeff Hornaceck?"  As all these familiar names came flooding back to me of the glory days of the 90's, I could also feel plaid and oversized denim jeans creep onto my skin.   Too funny.

It was really fun to be there.  We made comments like, "wow, these guys are... good! Look how FAST they pass the ball! WOW!"  like a bunch of nerds.  A player on the other team had an enormously bushy beard and we thought how unpleasant it must be to have Sweaty Beard.  We wondered how long it would take to grow one like that, assuming you are a quick facial hair grower. We really didn't know, so I asked the fellow next to me and he then proceeded to talk to us about beards for the rest of the time there.  Which i didn't really mind.  Yes, tell me more.  He explained if you shave then you have to keep shaving, because it grows in more coarse--PFFF, as if I didn't already know that. I then said if I DID have a beard, I would have a future beard.  Really, it was not an unpleasant conversation.

I'm pretty bad at taking group selfies. Here's my attempt. My caption for this was "Brooke let me come to the Jazz game if I sat a few seats away from her."   And it's funny to think that she'd make me take the picture as well. "you take it, but mostly of me. Nope, less of you. Leeeess....." 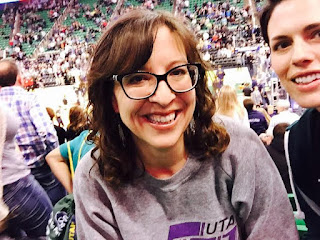 Also, Sean's birthday happened. Julian and I decided to make approximately one trillion birthday cards for him. We also got his relatives to send us bday  messages. But we worked and worked and honestly, we had at least 50 cards on display for him.  Saying things like, "Dear Dad, I love you more than money and our house."   "Dear Dad, I love you more than oceans."  "Dear Dad, you are good at reading. Happy birthday."  PRECIOUS.  Julian loooves writing cards and he loves birthdays. He is the perfect birthday buddy and doing the cards was my favorite. 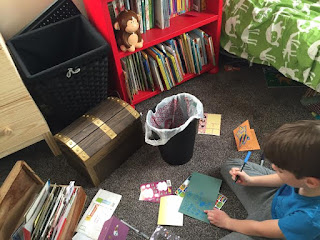 Here we are at birthday breakfast at a diner: 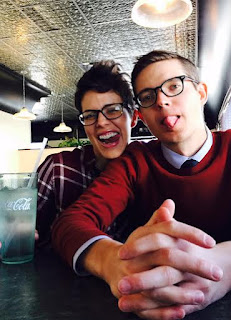 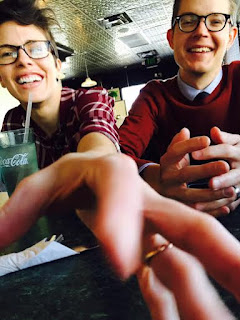 We visited a Mormon temple openhouse which was lovely and I laughed at our backdrop picture: 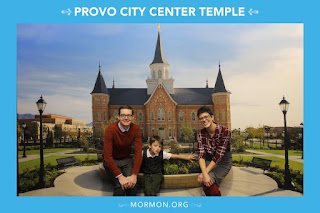 We also made a banner for Sean.  Julian wondered what the theme of this birthday was so we decided on Eye of Sauron.  You can see it on the banner, amongst also a hot air balloon, funny faces, an abstract sculpture, cakes, etc. 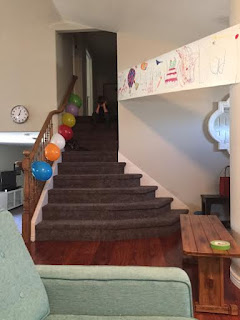 Here is Julian explaining the banner: 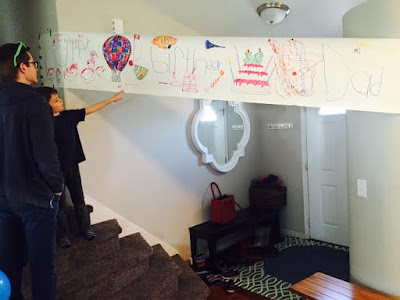 Later we had some cake with the standard birthday mustaches: 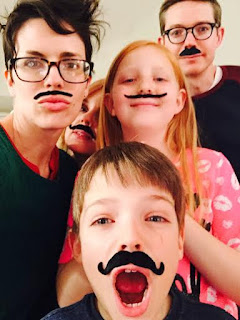 Friday we took our rackets and went to a nearby park for some tennis.  It was glorious and also shameful. So rusty.  But felt great. I love tennis running. Other sports-running like soccer or basketball are too much. Not like i've ever played soccer once in my life.  But tennis running is great. You run and work up crazy amounts of sweat but you stop short so much that it doesn't really feel like running. And anything that might resemble running but isn't, at least distances, sign me up.

We then went over to the playground and swung on the swings. I gaped at Julian for a hundred seconds at his apparent ability to PUMP HIMSELF. WHAT. WHEN DID THIS HAPPEN.  All of a sudden, 5 years of pushing this squirt on the swings of a million different swingsets flashed and then died before my very eyes.  He no longer needs me to push him.  I mean i tell swinging stories of times and swing sets when people were arriving after us and leaving, and this many more times and he's STILL on the swings. 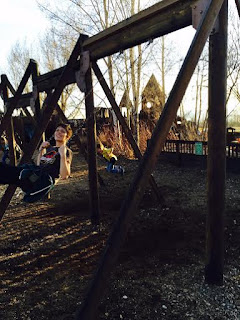 Jen on a swing: 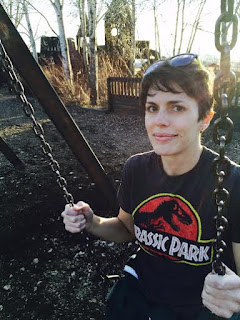 Saturday was one of those crazy days where you don't do anything super exciting but get a million things accomplished and so it is the best Saturday in the world.  Or you tell yourself that.  Like you accomplished and conquered or achieved Saturday as it was meant to be in its natural state.  We also went for a walk to another playground, and remembered grass.  That initial moment, when all the snow has melted. You see it, and vague memories of radical things start to come back to you of it being green, sitting on it, picnicking, and so forth. Since it was a family walk, we took the cat as well. 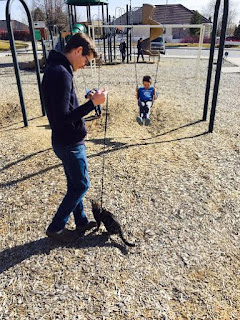 Here is Pepper having the time of his life.  Cats just love the swings. See his face? 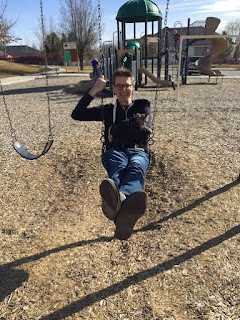 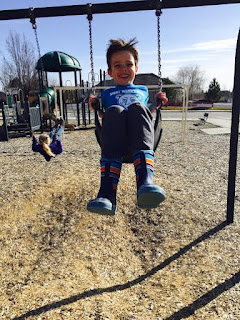 Julian finding spring on our walk: 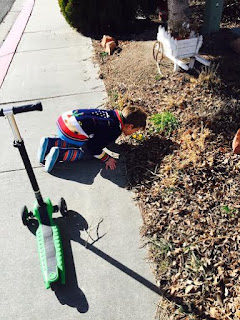 Speaking of Pepper, here was one of my weekend chores. It's odious, so I do it in spurts here and there: 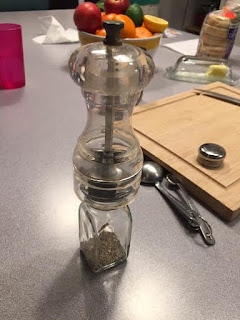 Weekend brownie in a mug: 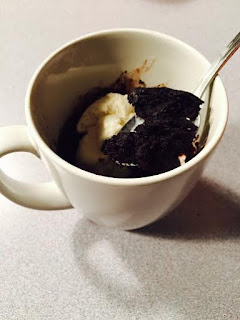 Look how dark that thing is! Valrhona 4-ever! So good. 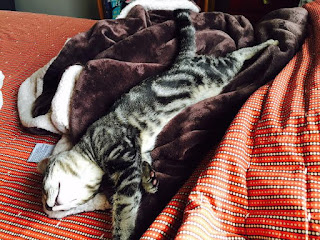 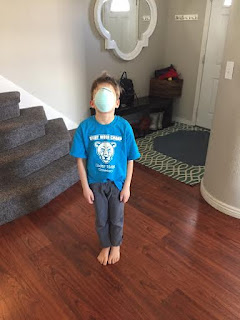 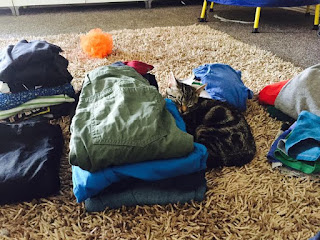 Thus, let history show, that was the weekend.