Our cat is growing up. All these memories of having cats from the days of yore are flooding back to me. Being unsuspecting prey. Navigating his manic kitty love.  Taking care of all the inside cat stuff.  I read this cat website (I subscribe to them all now) saying how the cat owns YOU, not the other way around. He's the owner. You take care of all his needs. And I realized, that's true.  I particularly realize it when I clean up his litter box several times a day and not only that, but he scrambles from wherever he is, and perches nearby to watch me do it.  How twisted is that? Dogs don't know, they don't care. (do they?) They're just happy to be alive.  But cats poop in their persnickety poop way, then bask in watching you clean it up for them.  And I'm like, dang you cat, your wish is my command.

I may have already mentioned this but oh well.  So, Sean has never been... how you say... sweet and cuddly with furry things in particular.  He's not very sentimental, you know?  But something inside told me he might be a cat person and so far this has been confirmed. One example took place during the first couple of weeks when Pepper was tiny and pure delight. Julian was struggling to figure out how to cohabit.  He loves him too and is still learning but he was less patient early on and would get angry if the cat would use his claws or not comply in some way.  Julian was expressing his anger and revenge on the cat, maybe making a threat or two, and said something like "That cat is the WORST cat in the WORLD," and I was surprised when, in a serious tone, Sean firmly admonished,

"That cat is a ray of sunshine!"

Pepper is very friendly, very cuddly, even is learning which pieces of furniture are not allowed (sometimes) and also that we don't love being clawed. However, he is a crazy kitty.  He is so energetic and sometimes I think he might be overstimulated or something.  Just out of his mind. And he looks at us with crazy cat eyes and it makes me scared. I eye him warily and I say, in a frightened whisper, "here, kitty. niiiiice kitty."


My favorite is when he finally, at long last, learns he's not allowed to bite me and knows that if he does i'll put him down, so he concedes to stay in my lap and fight with himself.  Chasing his tail whilst curled up in a ball.  Crazy kitty. And I still think it's adorable that, in his small frame, he can't help but bite.  Small bitey things can still be cute.

So he's crazy but also, like I said, quite lovey. At night when he's worn himself out he'll take turns sleeping on us and it's not enough to just sleep near, he has to put his little chin on some part of us. Oh man. Sweet crazy kitty. He also follows us around and needs to be around people at all times. Just now, Sean sent me this pic with the following caption:

Having him around is getting to me just a little. For instance, we visited some family who have a little 1-year-old and before I knew what I was doing, I was treating her like a little cat. No one noticed, but just little things like i'd dangle my fingers in the air near her, because little kids like to paw at things(?) Or at other people's houses I still am on my guard, expecting a cat to jump out at me every second. Good fun.

Here are some more fun pics for you: 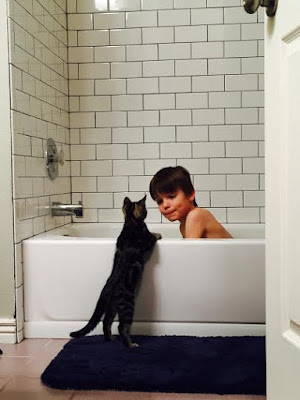 Since we both love and fear the cat, we feel a little jumpy and confused at times.  I gave the cat this sideways look as it slept between our heads, ultimately deciding it was better than what it was doing  moments before, which was creepily and unblinkingly staring over Sean's shoulder at his phone. 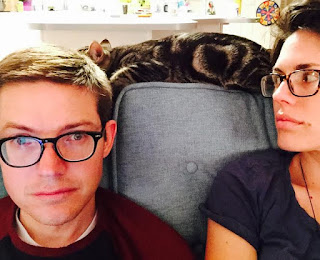 SNUG-LZ.  This would have been a fine name for the cat. Pepper doesn't really seem like the right name but oh well.  I wish we'd called him Captain Kirk or Jet Pack or something. Julian sometimes calls him Clementine and I am fond of Dr. Jekyll and Mr. Hyde. 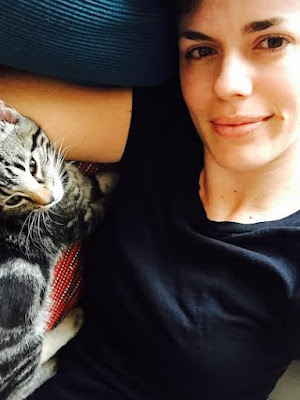 Sean and I like to play a game called Find The Cat.  You walk into a room and see if you can spot it where it lies. On a dresser, under a lamp.  Napping in a strangulatory way on the office chair. 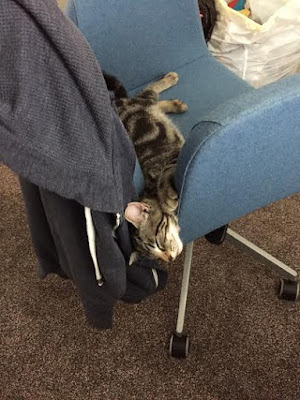 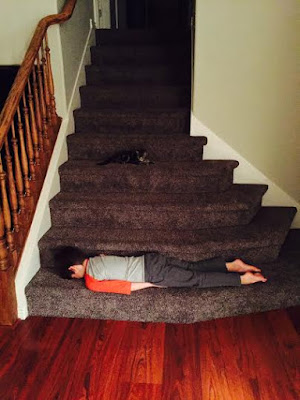 That's it for now. I know other people's pets are outrageously entertaining for people so we'll check back in every now and then with Pepper's latest.  Cat blogs are like baby blogs. Everyone wants to know every detail.

I read "strangulatory" and was like, "Wha...?" And then I scrolled down and saw the picture and burst out laughing. You are an artist with words!