Christmas Eve and the Final Points

Christmas is here.  It arrived on my doorstep in the shape of a hershey kiss-filled candy cane. And a CD. And chocolate and cookies and a Christmas card.

Neighbor gifts are something relatively new for us.  I remember trying something like that the first or second year we were living in NY.  We baked a handful of miniature banana bread loaves and set out to deliver them to people we sort of knew who lived sort of in our neighborhood.  It was nice but I don't think we did it again. It was just too hard.  I sometimes wonder if we should have tried to give them to stranger neighbors but I think that might have been super sketchy of us.  You don't just ring someone's doorbell and hand them a baked good.  Highly suspicious.  This reminds me of when the UPS guy asked me if I had a cat because he had some cat toys in his truck.  What on earth? Does any of that actually mean anything in the literal sense?? I had my doubts, but then I had decent reason because he, as are all UPS guys, was sketchville USA.  My friends have their own stories. We compare and rank them on a scale of sketchiness.  A friend won because her delivery guy wouldn't drop things off unless she was there to pick up. This might sound like protocol to you because isn't that what they do? they leave a slip? But trust me, it wasn't.

And that was my first and completely intentional Christmas Eve point I wanted to make.  Actually i have more to say about it. I have been thinking of neighbor gifts though.  I had an idea to doone this year. I thought it was pretty good and conceded to say that i probably would never actually do it but that the idea alone was sufficient for me (because that's what the point of neighbor gifts are. How creative can you be?)  Here's my idea. I found a bunch of tiny wisks i had bought some time ago for something or other and out it came. We'd sing to them, holding the wisk:

and present them with a rootbeer with a big smile stuck on it.  I was pretty proud of this until my sister told me of someone who'd left them a rootbeer and a can of chili with the message "wishing you a rootin' tootin' Christmas this year."   Speechless.

In addition, i've been mulling over this idea of re-gifting neighbor gifts.  We've done it with Christmas cards so why not?  We don't have to buy or compile anything, we give it to someone else and even leave the original tag on it. We wish a neighbor a merry christmas and get to feel good. We go home, they look at the gift, think it came from the name on the tag and they get the credit. Everybody wins.  Except the person who received it of course, because by the end of the month--*whew* (-- that's code for "please no more.")  Am i right.  That said, if you've ever given me a neighbor gift, yours was the only one I really liked. Or maybe one year i'll hand out some Tums.  Little Tummer Boy. 12 Tummers Tumming.


Point two, and speaking of cat toys-- where's my UPS guy now?  Getting a cat. We've been talking about it for a while but then were in a sort of weird state of denial about it and forgot but then we'd bring it up and be totally serious, but then "forget" about it.    I've always talked about it.  "one day, when we live in a house, we should get a cat. I totally will. I will get a cat."  And that was years and years.  And then a child came and we'd talk about it with him. And then we found a house and talked about it some more. ANYWAY, the point is, i think we're finally doing it.  I think. The scheduled pick up is tomorrow and we're both a little scared. I think Julian would LOVE a cat, needs a cat-sibling, and we would love it too.  But i don't know how to take care of a cat. I used to but not really because my mom would really do the taking care of business.  I did teach a cat to use a litter box once. I dunno. It feels different now. Having a baby was a big deal but this, THIS is a responsibility that I'm just not sure about.  But we'll see.  We're trying our best to keep it under wraps.  Sean and I were in the kitchen with Julian down in the TV room watching the Jim Carey Grinch and I mentioned another point/worry about "getting a c-a-t."   And Sean said, "Good job spelling the first word anyone learns how to spell,"  which made me laugh.  I am discreet.

Point three.  We're going to a family thing later and are bringing a pan of roasted root vegetables.  I stood in the grocery store staring at all the roots and asked a nearby lady,

She walked over and pointed, "I'm pretty sure that one. I know because we grow those but I don't like them. Why do you even want it?"

Which made me laugh. Her trying to persuade me to just give up on it because it's gross.

I said, "ha ha! 'why would you even want a beet?'  But that says 'turnip' below it! are you sure? I'm roasting a bunch of vegetables. I like beets but i never buy them raw."

She wasn't sure so we called a grocer over and we three beings deliberated over which was the beet, the turnip, and the rutabaga.  No one knew so we called over ANOTHER grocer who set us straight.  (turns out that lady is growing turnips)

And he said, "It's the cleanest slate you get with a person. And you decide what's on it."

And he continued, "All they know is what you look like and what you choose to say."  Both of these things can work in or out of your favor.  But it's true, I think that's why i love it.  Having a funny moment with someone about just one thing, just one time, is exhilarating.

Point four. Picture time. They are of random things that have been making me extra happy this Christmas and you need to see them too.  First, my Bentley Snowflakes. 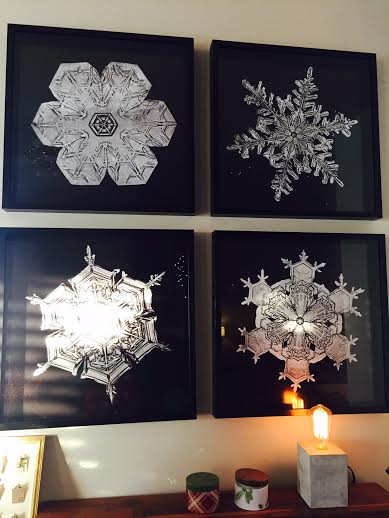 I cried when they went up.  Staring at them is pure therapy.

And staring at this is pure rapture. 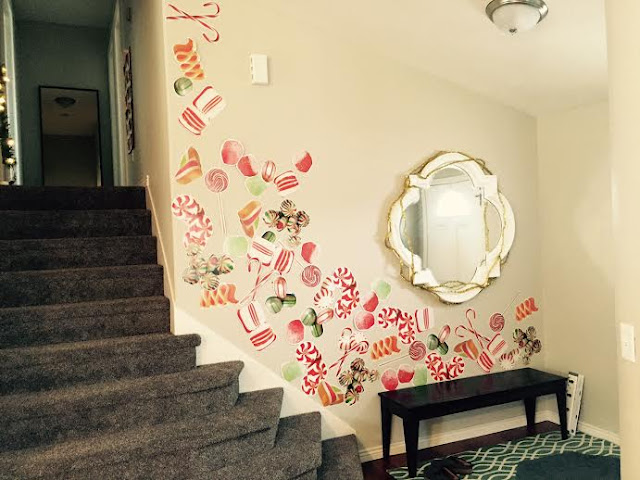 I dreamed this wall. I told Sean it was all i wanted.  And i did it. I made it happen. It's just what i wanted. 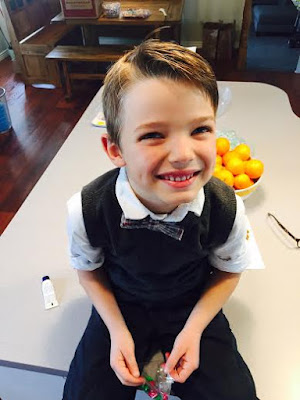 Julian did NOT want Hedwig on the top. He's a bit of a traditionalist and wanted the star but he was overruled.  We thought this would be as fun and magical as last year but guess what, 6-year-olds gain a hundred pounds since the last year. Hang in there, Sean! 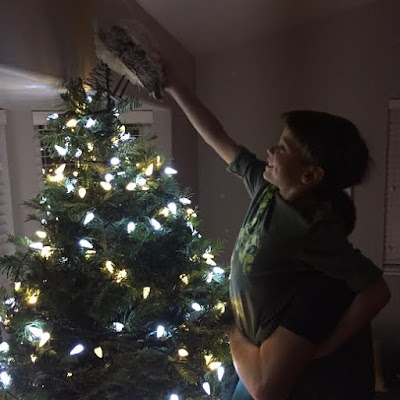 Christmas lights on a house--whaaaat?  Outside decoration was new and scary. So we focalized on a specific location--the tree. Paying proper homage to our tree idol. 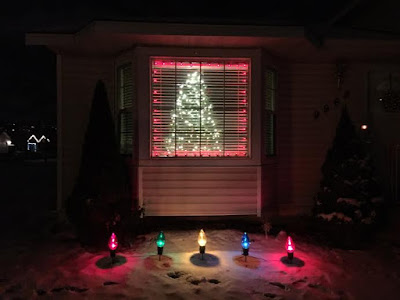 Our party was great. Tons of fun. And tons of FOOD.  Look at all the food. I loved heaping all of the food out onto the table. Actually i wish i could say that was all of it. 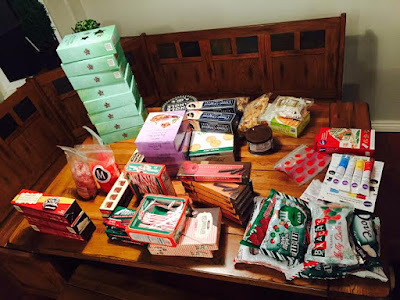 At this party we had sweater cookies to decorate. One friend won the prize.  She patterned this cookie after an actual sweater. Of her grandmother's.  WIN. 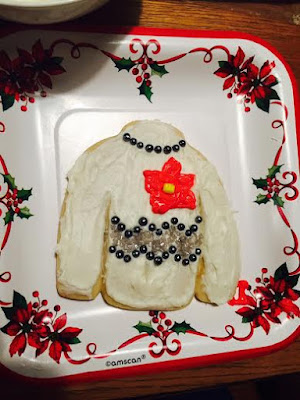 Just wanted to say thanks for reading and checking in during 12 Days.  From all of us here at )en'slog, a very happy holiday to you and yours. 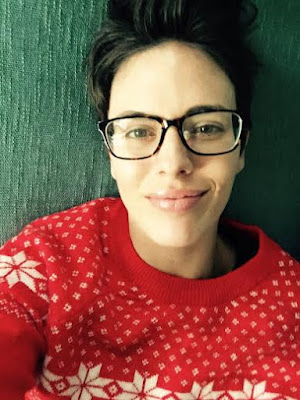