JULIAN: Why did they build the Great Wall of China?

JEN: To keep out their enemies.

Mongol hordes just makes me laugh.  This is from a tongue twister from Calvin and Hobbes.  Julian has taken an interest in them lately. He's actually really good at saying them.  For example:

He says that one pretty perfectly.

The one from Calvin and Hobbes goes as follows:


How many boards would the Mongols hoard if the Mongol hordes got bored?

One day several weeks ago-- I can't remember why we were doing this--we spent a substantial amount of time trying to write our own. It proved to be quite the challenge.

Timeout--Hahahaha! Sean just walked in and I asked him, "Sean, what was that tongue twister you came up with?"

Sean lit up and said excitedly, "Ah! Yes. I've been wanting to read this for a while. I thought about it the other day and couldn't remember." And he actually brought out his phone--

Jen: hahaha! You wrote it down on your phone??

Sean: Yes. I didn't want to forget it.

I don't know why but it just made me bust. ANYWAY... it was tricky. Here's one Sean came up with:

Only a bear knows what a bear's nose can bear.


Here's another one we thought of:


Two can can-can if a Toucan can.


To make it extra tricky, I suggested using "can-can" again, like this:

But Sean rejected that. They're not really tongue twisters I guess. What would you call them?

Lastly, here's a pic of Julian in the car a few days ago, crying because he couldn't remember the "mongol horde" one.   I love this family of mine. 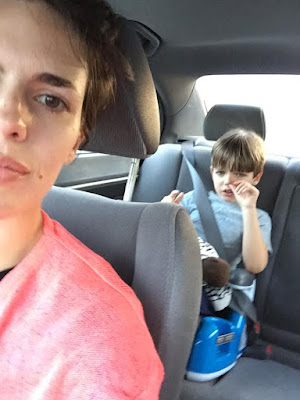 I like that "Toucan" is perpetually capitalized. Because of course you're referring to Toucan Sam, right?

haha, yeeeesss... that's what i was thinking.