The Valley of Goblins

Since moving to Utah we've made quite a lot of discoveries, discoveries of all kinds and varieties. Some have been more pleasant than others and one pleasant one is that of what was always a mysterious place to me called "The Entire Expanse of Central to Southern Utah" or what I used to call "Wasteland Area" or "Absolute Nothingness" in my former, growing-up-in-Utah years. Also may have been referred to as "Nuclear Test Site" or "Crazy People Who Just Want to Ranch and Farm All By Themselves." Wow, I'm really having a good time with all these "quotes." I really hope you physically did finger quotes as you read all that. Also, it may be totally incorrect to capitalize AND quote, but i really love both so I'm keeping it.  Let's continue.

For me, and some of this rings true still, Utah consists of I-15 and the surrounding land. Farmland in the North, Salt Lake Area which is still kind of a big question mark for me, then you continue south to Utah County where I grew up, then the towns get smaller and smaller still. Then nothing for miles and miles and miles, as far as the eyes can see, until the rocks get redder and the land more deserty. You might take one road to get to Cedar City, St. George and Las Vegas, or another to Lake Powell, which was my preferred destination, always, and forevermore. Since I'm on the tail end of a large family, I remember big family trips but barely. So I think we saw some of Zion or Bryce Canyon? I think? But truly I can't recollect. We may have bypassed everything and hightailed it to Lake Powell every time.  And by the time we were older my parents had probably had it with family trips, thus taking my younger sis and I to Salt Lake City one year for Spring Break, a truly cherished memory.This is my very roundabout way of saying I've never really visited the south of here.

This time around though, I've made it a goal to finally discover the southern Utah area and see what all the hubbub is about. And let me tell you, it is worthy of said hubbub.  I already blogged about visiting Arches National Park and the magic of that place. This time I'm going to tell you about visiting Goblin Valley, where we went sort of as a birthday trip for me.

You know, you go through your life living and doing and seeing and experiencing and there are just some places you feel were made just for you. They belong to YOU. They are yours. For me, Goblin Valley is one of those places. I don't know if it's just the name that particularly resonates but the moment I laid eyes upon it, a very loud and equally delightsome nature-gong sounded in the core of me, and I relished.  Let's talk about it by way of pictures, shall we?

First, during our recent Spring Break, I had the brilliant idea that all people should purchase/wear hats or shirts of the place they're visiting, for pictures, as I did at Craters of the Moon in Idaho, which I'm kind of surprised I haven't blogged about. I got a sweet visor that said Craters of the Moon which was actually another place that, you can imagine, struck a Jen chord, in a somewhat more intangible, terrifying way (much like the real moon, so appropriate).  But I forgot my cool visor and had to get this Castro hat, as Sean called it.

Me and Julian really freakin' excited to be there: 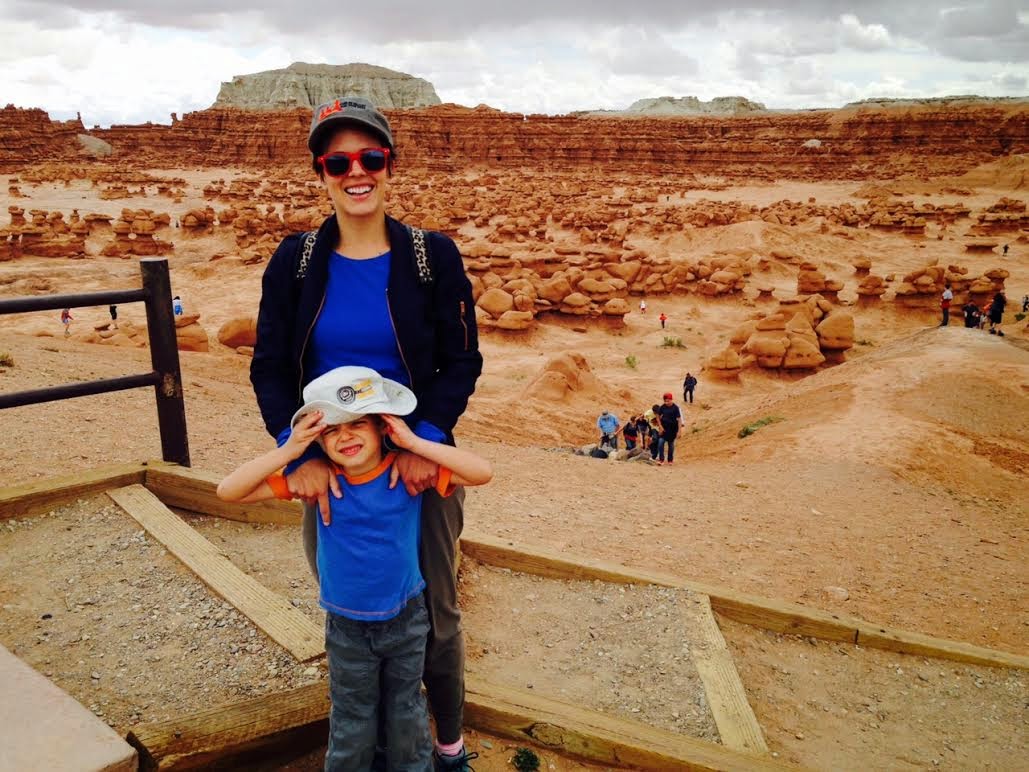 When you arrive, you will be immediately enveloped in a cloud of intense wanderlust. This place is the BEST. I could not contain myself the entire time. "World's best playground!" "Look at all the goblins! ha ha ha. Goblins!"  It was just too much fun. And as I reflected on this globular (and gob-ular!) labyrinthine wonderland, I saw the parallels of the popular and somewhat disturbing movie of my youth, Labyrinth and how there is a Goblin City there as well. 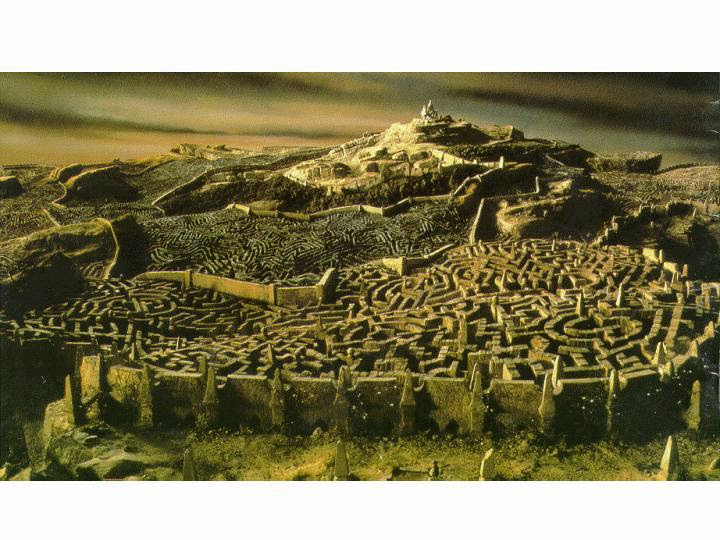 Except here the labyrinth was less scary, more exploratory, and i had zero fears that the sandstone rocks or inexplicably alluring rockstars would steal any family members. 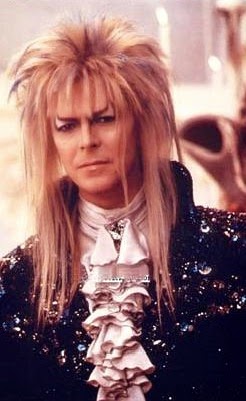 But it really felt like a place that not only looked amazing and otherworldly, but that i could get right up and in as well, which is really the best. We want magic to be so real we can put our faces right up to it and rub it all around. And here you can.

We clambered the heck out of this place, traipsing on a made-up path of neverending nooks and cubbies. Deliciously explorable gulfs and canyons, pockets and slots. The threat of just going and going and getting ourselves out there dangerously too far was very real and we had to monitor ourselves every now and then. 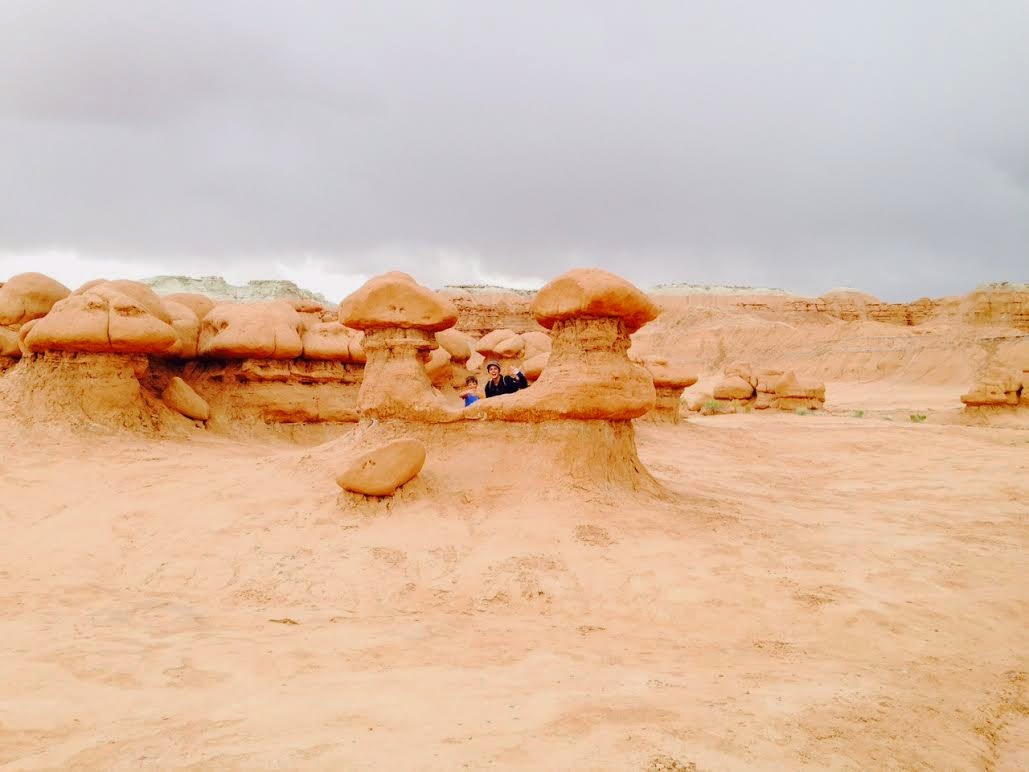 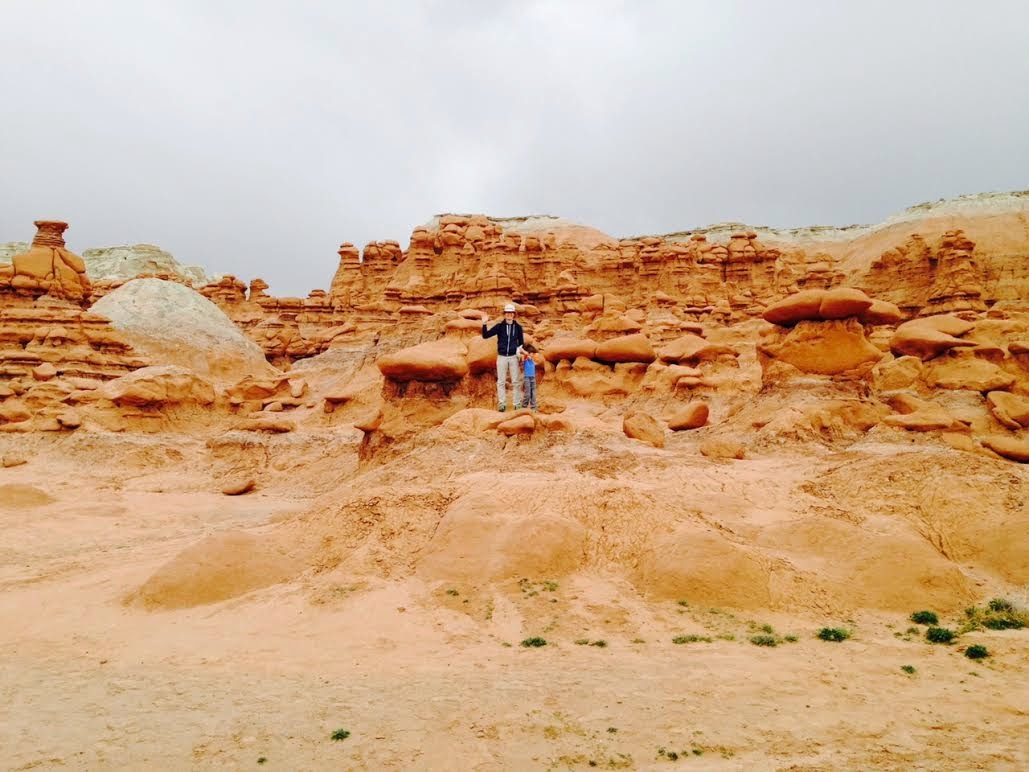 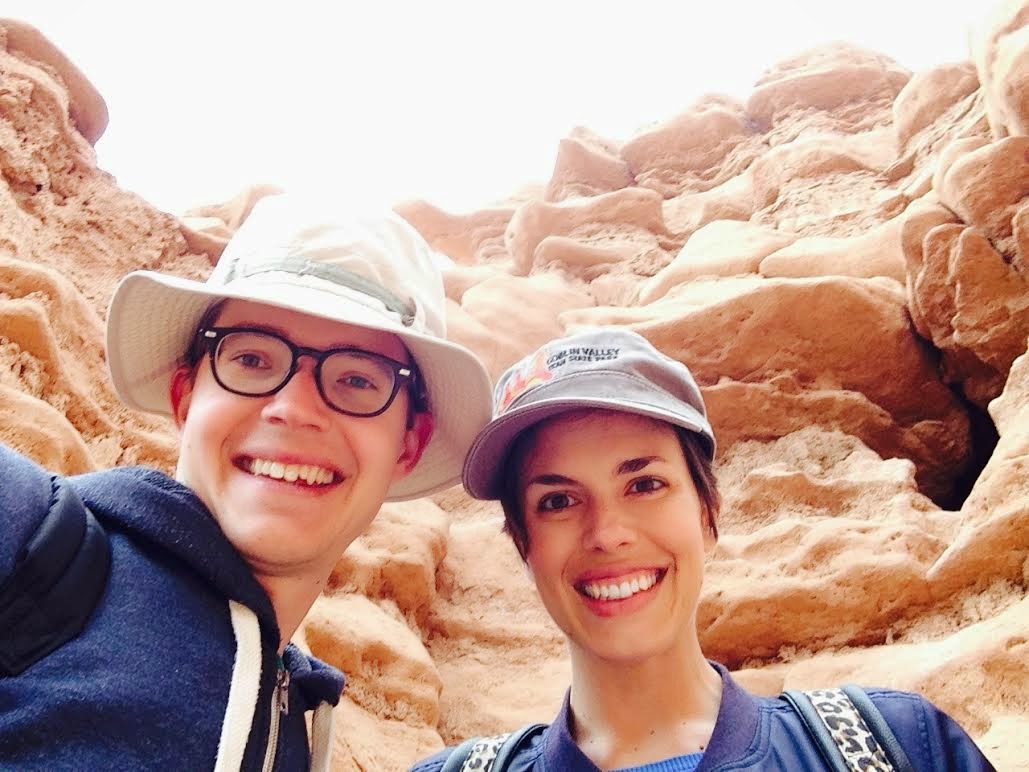 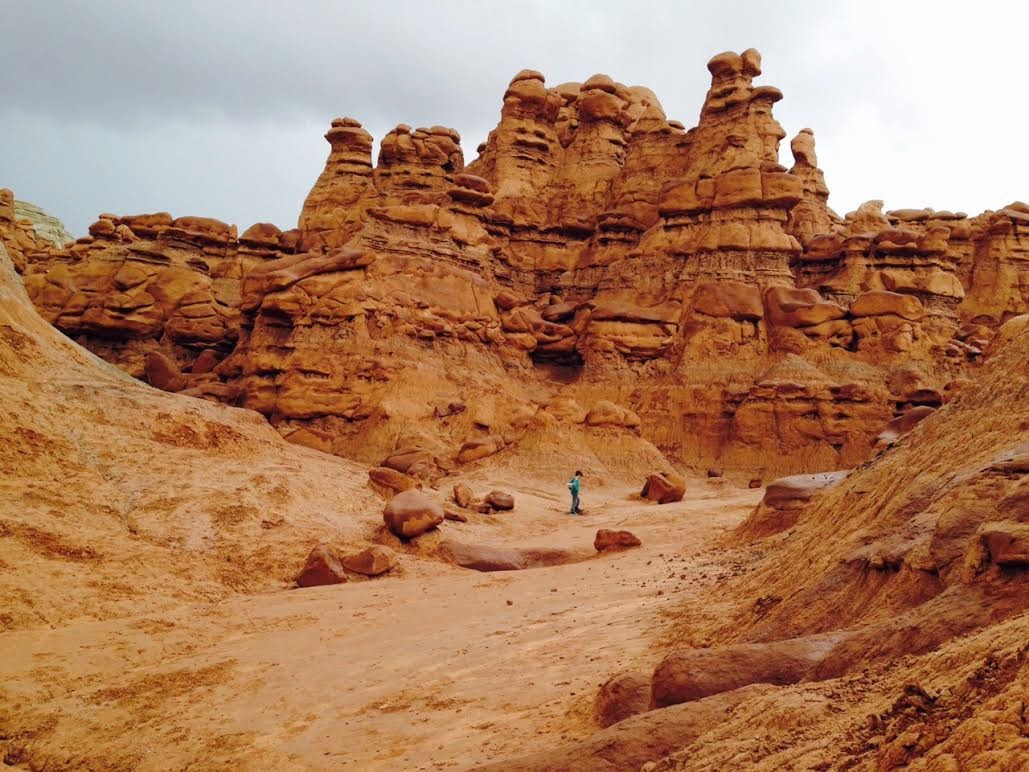 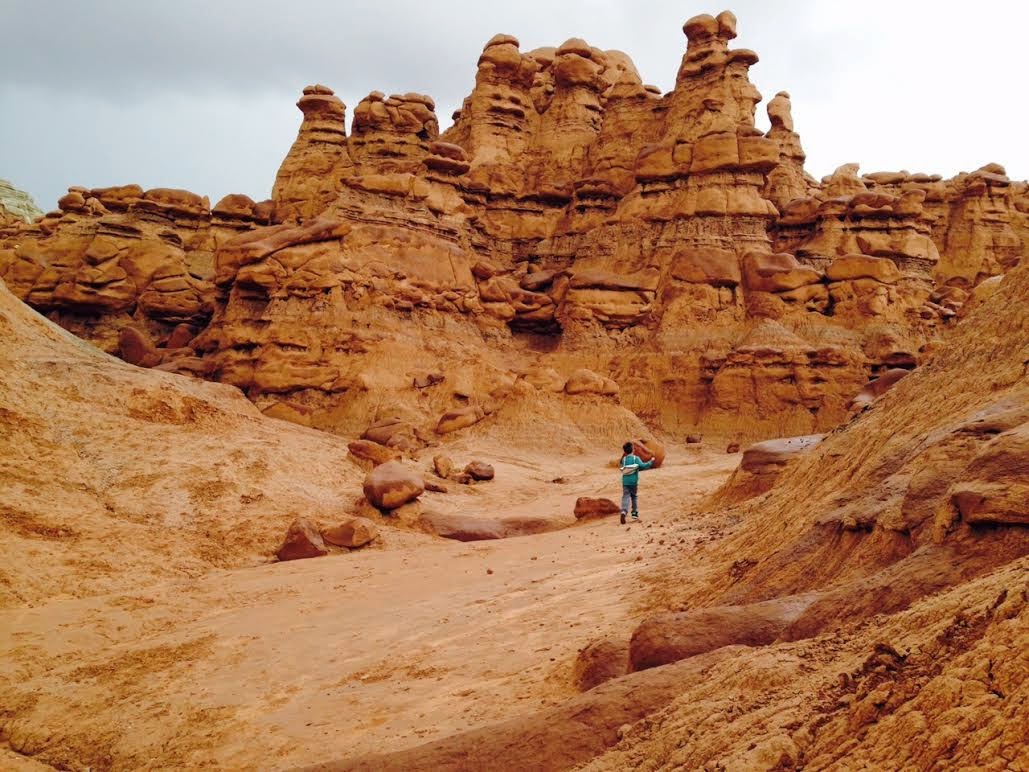 At one point this giant black bird swooped and perched atop a goblin and I gasped that it must be a raven, for I saw it on the list of local birds at the visitors center.  Welcome to Goblin Valley, it seemed to quoth. 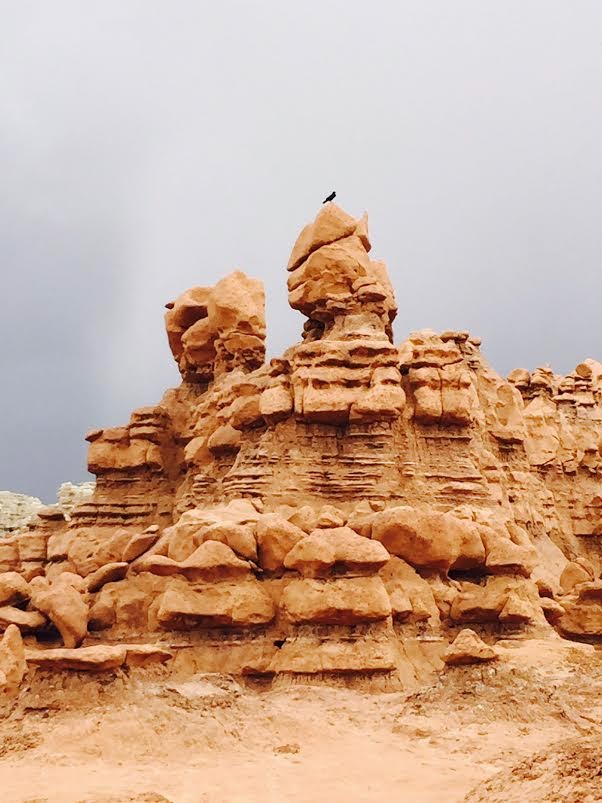 We went on a cool-weather weekend which was a blessed thing. The terrain was soft, always, which was strange and interesting, sometimes a little unsettling (heh). You had the feeling the place could blow or melt away at any moment. Along the way we saw some really startlingly beautiful flora. These things were crazy!  I just tried to identify this first one but failed. I did, however, get bombarded by a flurry of awesomeness when I google-imaged "red bulb desert flower."  Check it out. Or here, let me help. 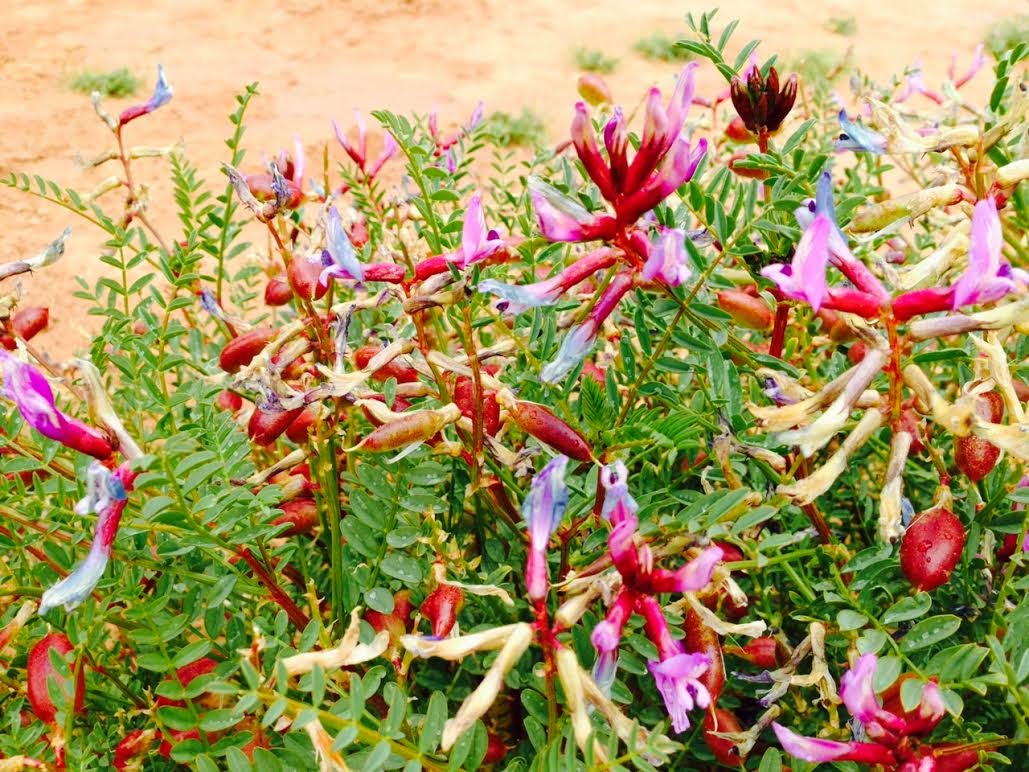 Desert flowers are kind of the bomb. 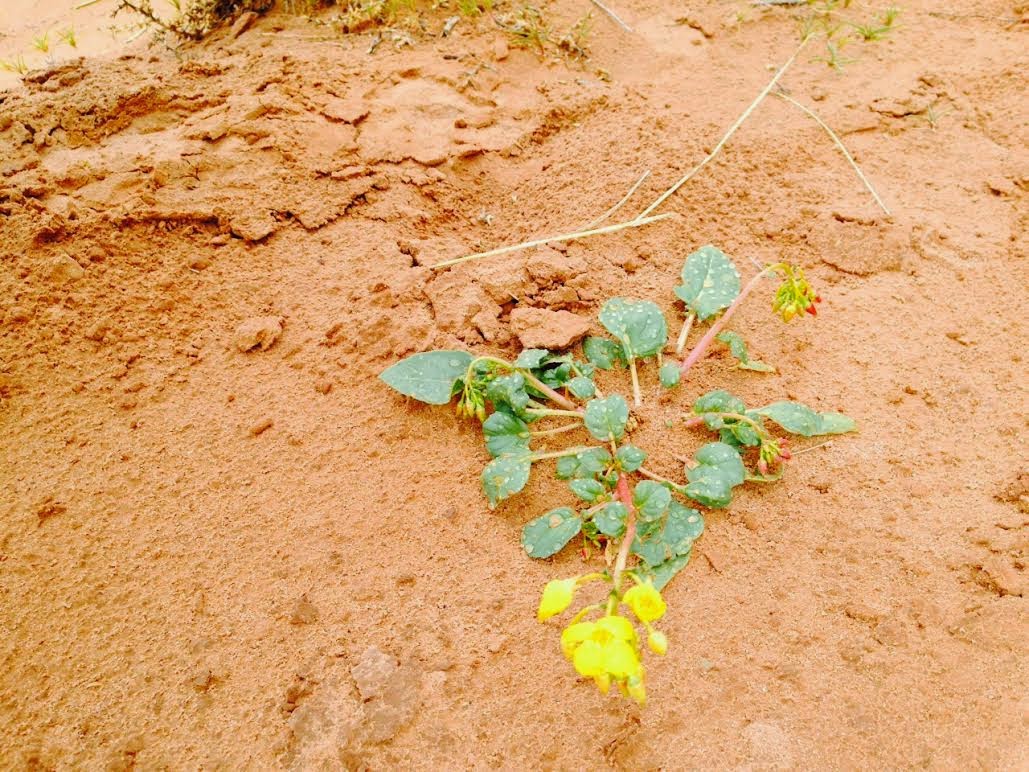 Wait, what was this place called again? 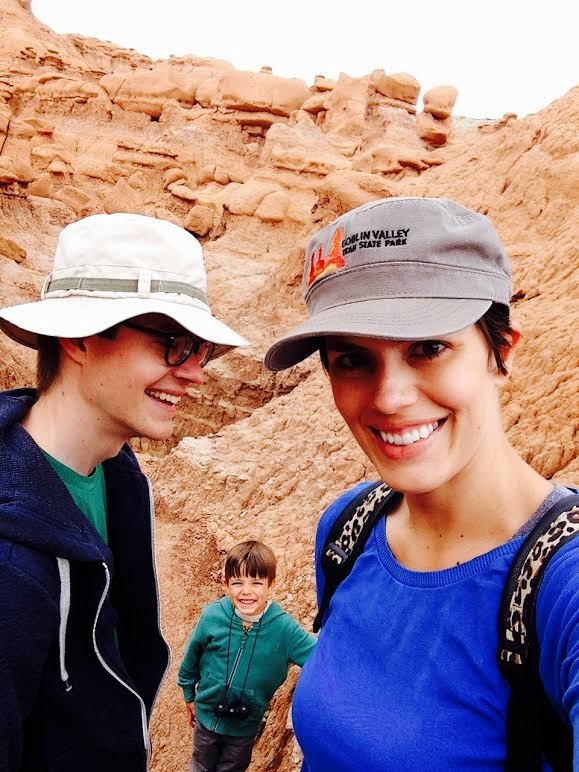 It was a rainy day and sprinkled harmlessly off and on. During one little showering, we found refuge inside this cave which was so fun. We thought we could really live there if need be. 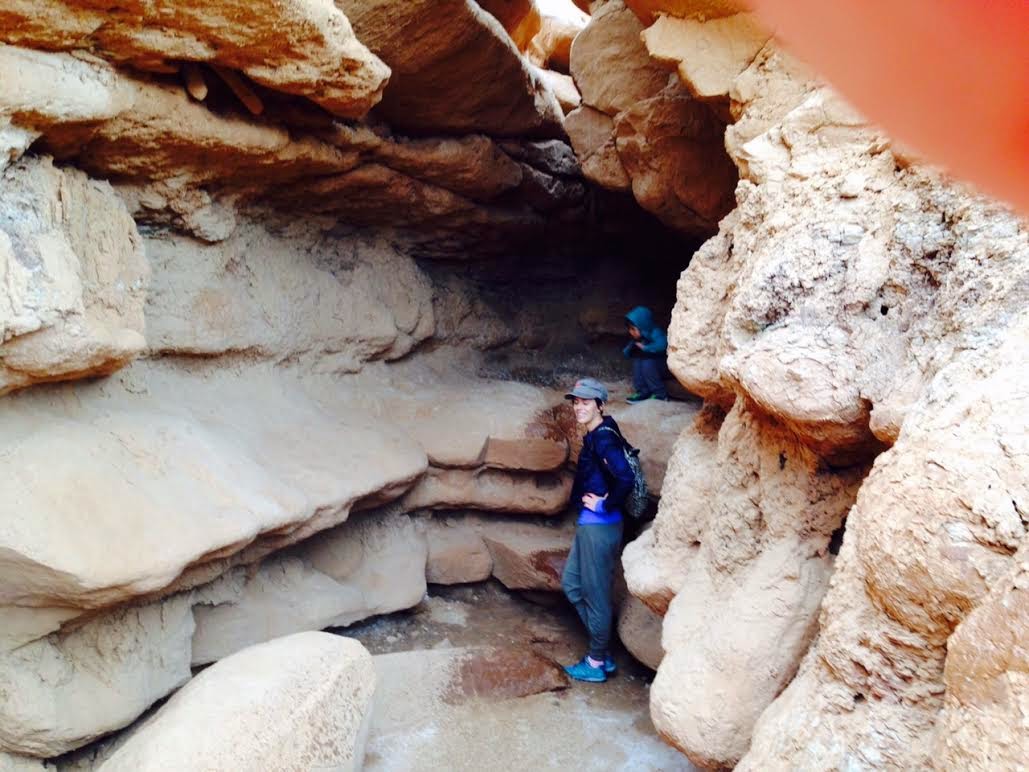 Every once in a while when i'm out in the wild I get a little survive-y. Like I'm this wilderness woman who must suddenly find ways to stay alive. Since i really know nothing about surviving in the wild, other than the priceless gems i learn from Survivorman (please watch this show. Available for purchase on Amazon or itunes)  this makes very little sense and shows for nothing. But I feel it. I feel it.  Maybe it's a past life i had or something. Julian feels it too. He loves to hold the map, use the binoculars, forge ahead and lead the way. So much fun. 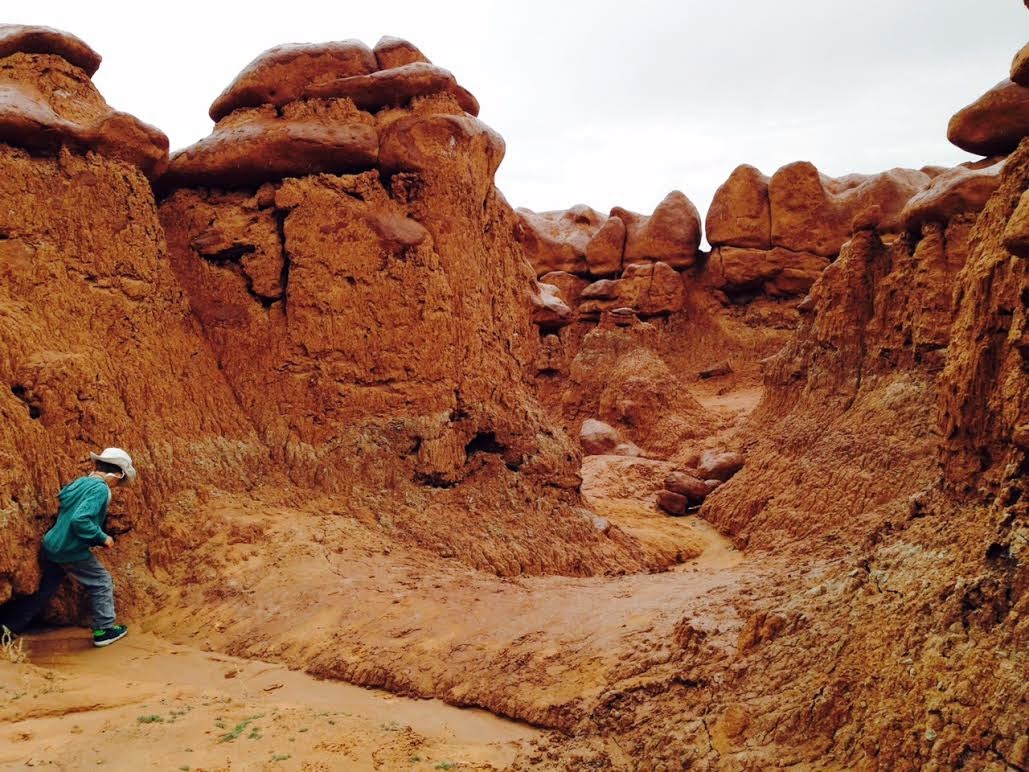 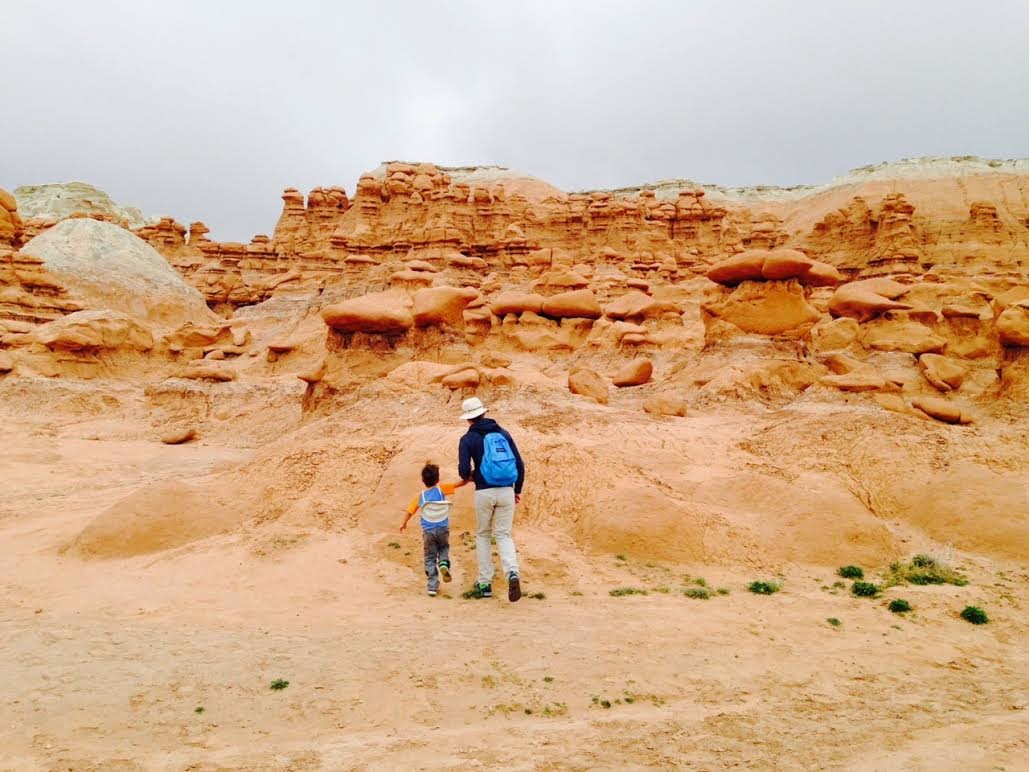 These next few pictures are called Jen's Learning How to Use Panorama.

Not great. This last one was in a crazy place. We climbed up and over a narrow rounded ledge and found we could go no further, the drop down was too far. Here's another: 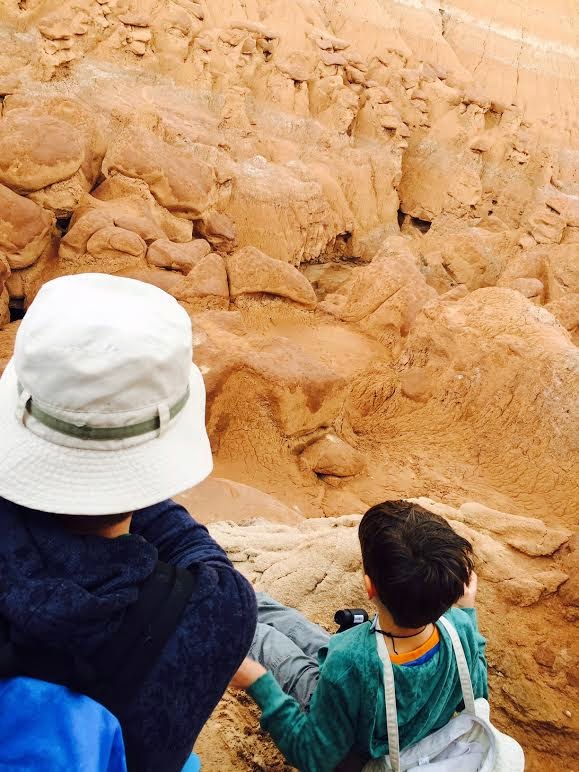 You can't even tell, right? These pics struggle to show dimension and depth. Also i just kind of took bad pictures. Still. It was crazy.

And then it really started to rain and things got interesting. 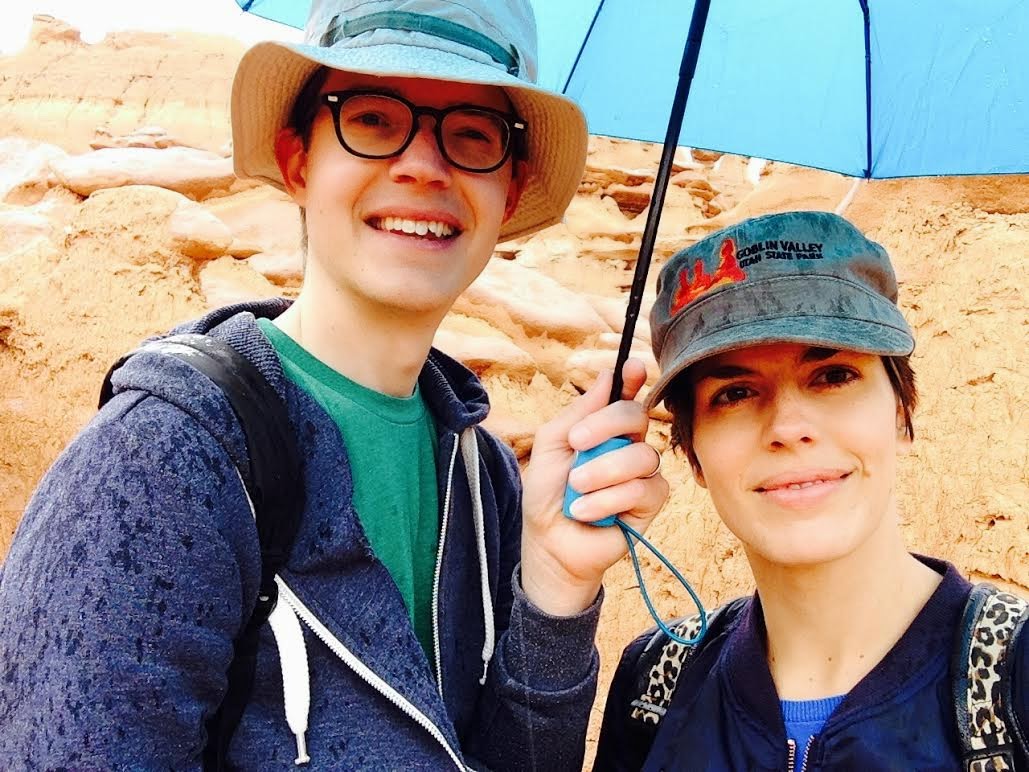 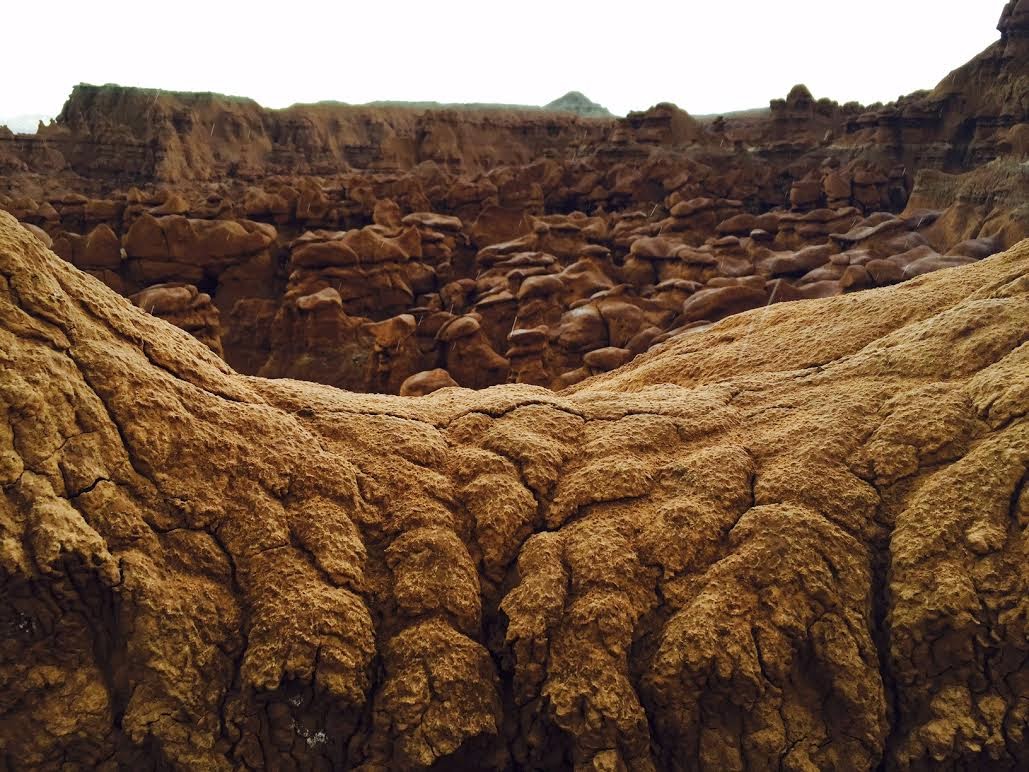 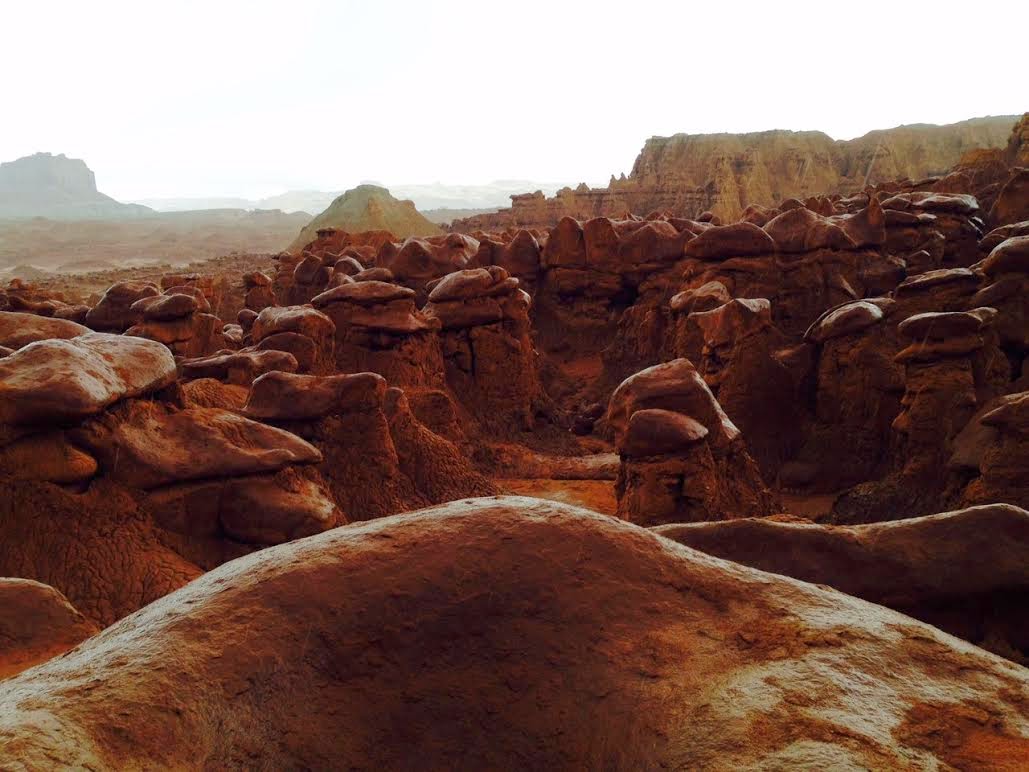 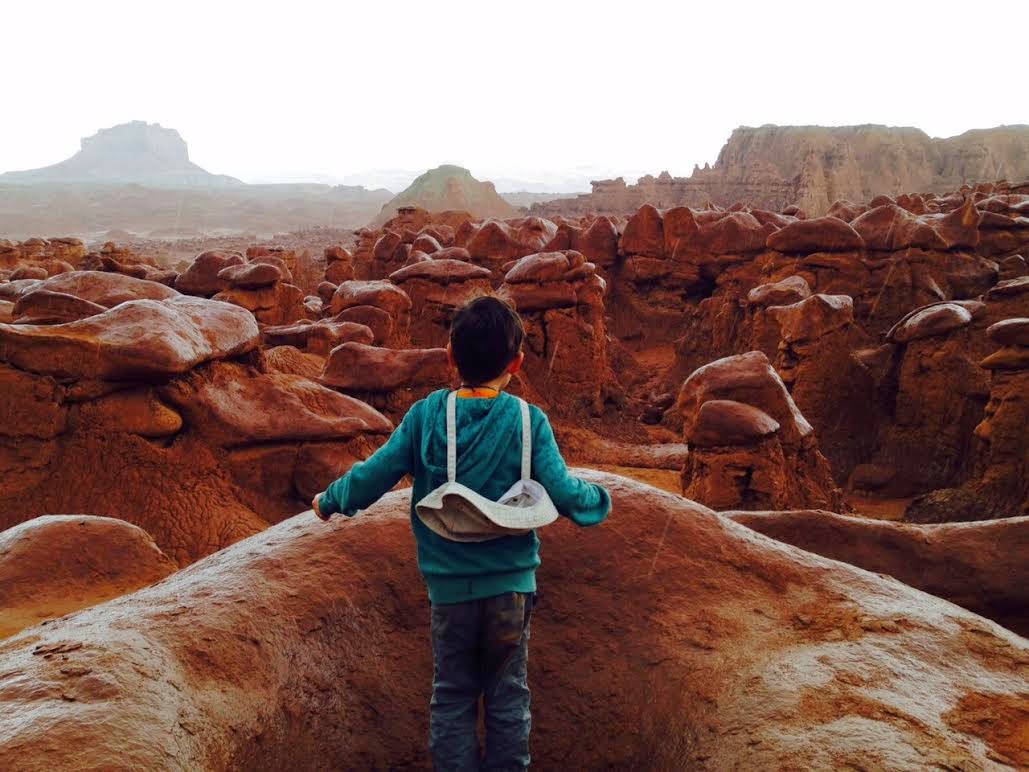 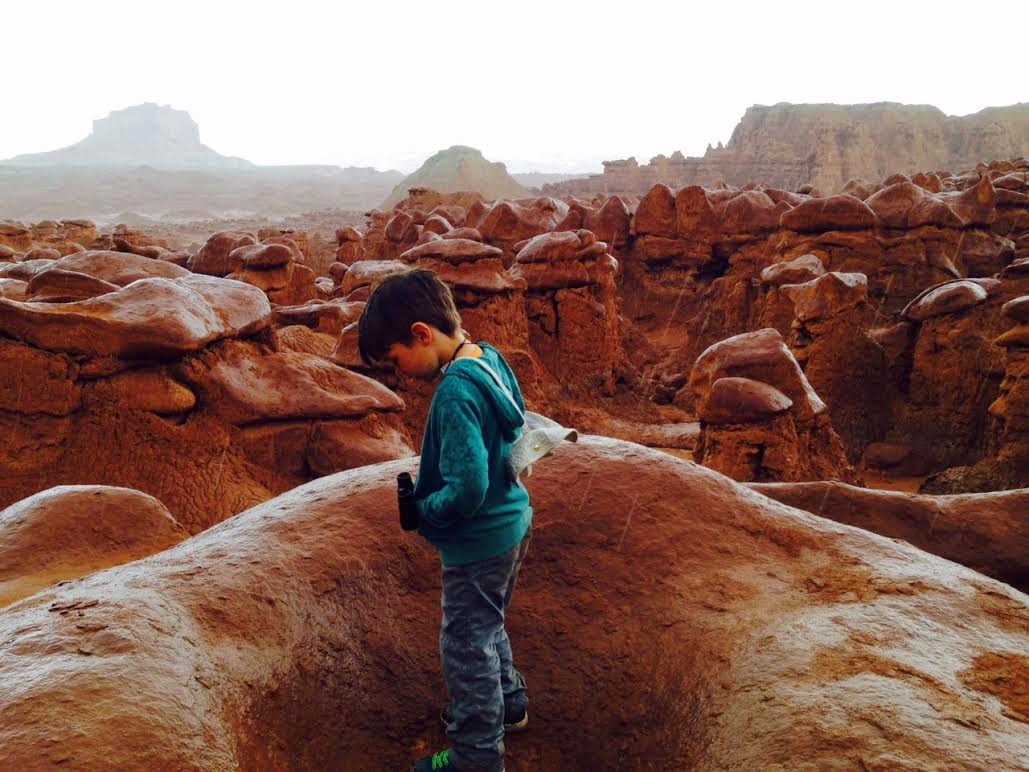 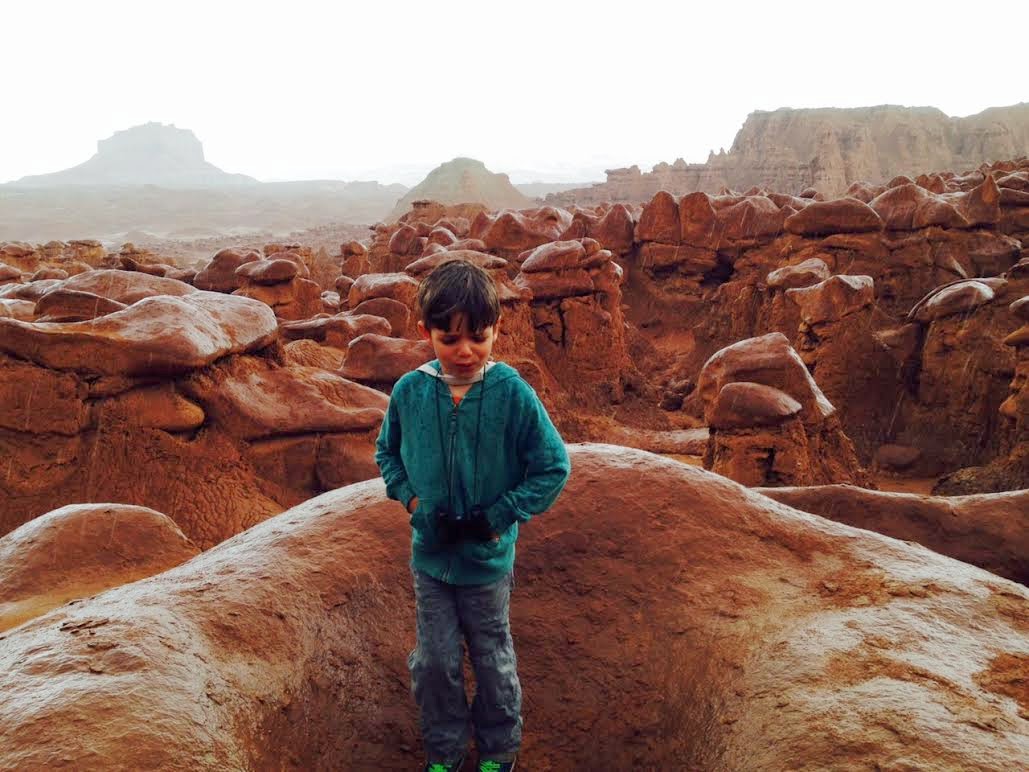 Then the skies unleashed and these are basically the last of my pictures but the events unfolded as follows:

1. We heartily wished we were close to our previous cave shelter.

2. Decided the storm was a doozy and we'd better run back rather than try to wait it out, especially since no covering or cave of any kind could be found near us.

3. Ran back and really did feel the earth give way under every single step; you could not linger. Felt the rocks and walls melt to slippery and seemingly malleable clay. You grab a rock to steady yourself and suddenly your palm has an inch-thick covering of it.

4. Watched milk chocolate streams form and rush by in an instant.

5. quickly acquired 5lb clay bricks on each of our shoes making us that much taller but that much slower. (shoes later had to be sprayed inside and out.)

6. Hurdled rivers, were pelted by hail on the backs of our necks, got completely SOAKED and frozen through.

We finally and barely made it back.  WOW.  Julian called this the best part of the whole trip. Sean had him by the hand and he was giggling and slipping and sliding the entire way.   We got him changed, collapsed in the car and sort of changed ourselves and then I started getting suuuuper woozy and ill. I think I started accidentally (as opposed to intentionally) hyperventilating from blowing into my frozen clenched fists. So i had to put my head down in the car to wait out the quease and wooziness and everything. What an ADVENTURE! :D

We loved it. We loved it all. We will go back but something tells me we have many more places to check off our list of discoveries. Until next time, Goblins... 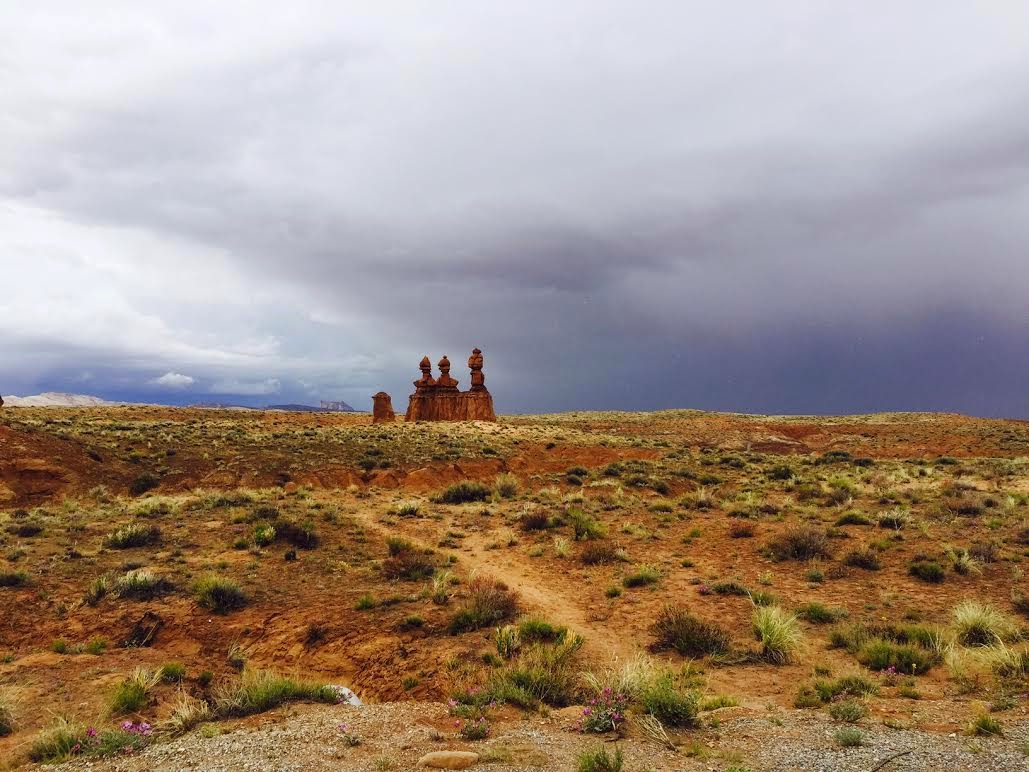 That last pic you posted is a formation my family always called Huey, Dewey, and Louie.

Oh, and Goblin Valley is my favorite place in the entire world. I am suddenly distraught that I have yet to take my kids there.

This is good stuff, J. Love the pics and how you seemed to capture the other-worldly feel of this place (I assume, since I haven't been). And thanks for reminding me of the real Goblin City.

I wound of there on a Lake Powell-gone-very-wrong trip, and was pleasantly surprised by how fun Goblin Valley was! (And that was before I got even slightly outdoorsy, so that was a big deal to enjoy a place like that!) One of these days I'll have to return...