No, Sam. I Can't Recall the Taste of Spring

When I was a child I had a dream I was riding my bike out on the street outside of my subdivision.  This would have been a big deal and somewhat scary for me at the time.  But the scary part of this what I now deem a nightmare wasn't that I had ventured far from home, but that when I did turn down my street, everything was fine and looked the same except for one thing:  when I got to where my house was supposed to be, it wasn't. It wasn't my house.  It was a different house.  Panicked, I thought, if I try again, it will be there.  So I'd ride up and come back down and same thing-- different house. Not my house. It gave the appearance of everything being well and normal except for one vital thing that makes you feel safe. And thus a nightmare was born and I woke with a feeling that all I knew to be true and real suddenly wasn't, and it was terrifying.

Sean told me when he lived in Colombia how awful it was when the season just never changed.  The days passed, time passed, but the weather stayed.  And he would begin tricking himself. His mind and the weather combined and played tricks on him and one day would be windy or rainy and he'd say, "oh, here it comes. It's happening,"  and he felt like he could move forward. But it would go back. The weather didn't change after all.  It would remain essentially the same and he found himself stuck in an altogether different realm of unsurety, the likes of which he had never theretofore experienced. It would make him question everything. Had time really passed after all?  Was this real life? Was this all a dream? Where was he? WHO was he? What was he.

I listened to this story in frightened hushedness and, like a horror movie you know you will regret for the rest of your days but find yourself tip toeing back to in your mind every once in a while, I sometimes picture this, and I shudder.  I've never lived in a place without seasons.  I've been tripped out visiting a place that has difference seasons at different times than I'm used to and have been pleased to visit a place with better weather than I was used to.  It's eerie and surreal,  but delightfully unnerving. And while I'm there I decide, I think I'm just going to chase this feeling, just as I do when I'm having an pleasantly unnerving dream. I chase it.

But when you're in real life, and your climate has a steady pattern, your physiology adapts, it learns. And your psyche can anticipate and it gives your whole being a sense of stability.  It's something I rely upon very heavily and I'm grateful for it. I'm grateful for the balance of the seasons and the feeling this gives me.      But what do you do when everything changes?  What do you do when the season won't stop? And it just goes on... and on... and on?  And you wake up with each new day and all of a sudden you feel as if you've been thrown into another dimension.  Suddenly you begin to question:  Am I caught in some kind of time loop?  Am I living in Groundhog Day?  Has something happened and no one's told me? Do I even know who I am anymore? Am I real? Are you real? Is real real?

The end of winter is always hard.  Consistently, everyone around here barely makes it out alive.  This is all understood. We know this to be true.  March has always been the worst because it's so spotty. It's so unpredictable.  It sees us weakened, vulnerable, and it pounces and preys on that.  I imagine it saying, in a snakelike hiss, What's that? You're sick of winter and aren't sure if you can go on? Well why not have a 60-degree day? there there. Yeeeessss.... Enjoy. And then, GONE.  It's GONE.  It harshly rips back the good day and you're back to winterlikeness.  And while I've typically hated it for this reason, at least it gave us a few warm pockets, a few 60-degree days here and there, a few reasons to hope, perhaps foolishly, that one day it would end for real.

But that was before. That was before this winter.  This winter became something else.  This winter became alive, cognizant of its own existence as a separate, living breathing entity, capable of independent thought. And it became a monster.  But not like a monster you would expect. Like any other harsh winter in years before, we enter March crawling on our hands and knees, beaten, worn from battle, our clothes are tattered and torn. We're dazed, confused, a little bit weepy.  But we make it.  The equinox arrives and with the last bit of strength we have left, we thrust ourselves into it and collapse.

But not this March.  The equinox came and went and that's when we all tripped over a heap of dirty petrified snow and fell into the alternate universe this polar vortex created, where winter never... ever ends.  The sun will shine but it's icy cold. And there's a frosty wind that won't go away.  Day after day...after day.. after day.  And you sincerely begin to wonder, in that same hushed fear,  I know it was supposed to be here.  The spring was supposed to come. But it isn't here.  Everything else looks the same. My house, your house, your face, my face.  But it isn't here.  And the cold sunny days make you feel afraid.  And you wonder if the earth has quietly fallen off its axis, or, like an old record player, the needle becomes stuck and what once was a nice progressive tune becomes a repeated and jerking noise, cyclical and sinister.  Somebody bump the earth! you exclaim. Somebody do something.

They tell me hope has sprung but you have to look hard to find it.  We were driving in the car yesterday and I leaned my head against the window. I stared at the dead trees in the park and just as I was thinking the words, death...death... all around me is death, Sean said, "Julian and I saw some tulips today!"  Spring is trying to happen, but I have such a fog over my eyes, I can't make sense of any of it.  I can gaze upon some new growth but I don't really see it.  Spring is a fable, something from another time, some fantastical tale passed from generation to generation. Storybook lore of a place where there's spring but it's not a place I've ever been before.  I've forgotten it.  I've completely forgotten spring. I can't remember it.  I don't even know what it means.  Trees are going to have growing things on them? What does that even mean??  The touch of grass, beautiful things, the color green. Warmth.  True warmth. Going on walks. Lying on the grass in the park. The Botanic Gardens. Being outside for the joy of it. I don't remember any of it.

Anyway.  We're at the end.  I'm at the end.  The end of March. I gave winter until today and then it had to go.  March 31st and that's it. No more.  We woke up this morning to cold rain and thunder. It was so dark and gray.  A friend texted our weather forecast for today and asked me to please make sense of it which of course I couldn't: 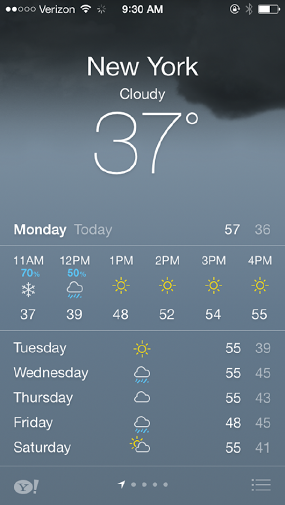 And midway through the day, the sky was blue with a patch or two of clouds.  The sun shone, the air was still chilly.  The wind lingers with a bit of a bite but it's not as pronounced.  And tomorrow is the first of April (how CAN it be April? How can my birthday be so soon? It's not right. It doesn't feel right!) and we WILL see the change.  I'm not going to live in this crazy ANY. MORE.  It's right now 9:22pm.  You have a little under three hours to make your move, Winter.   Leave now, and never come back. LEAVE NOW AND NEVER COME BACK.
Posted by )en at 7:22 PM

I love this one. Good job, Jen.